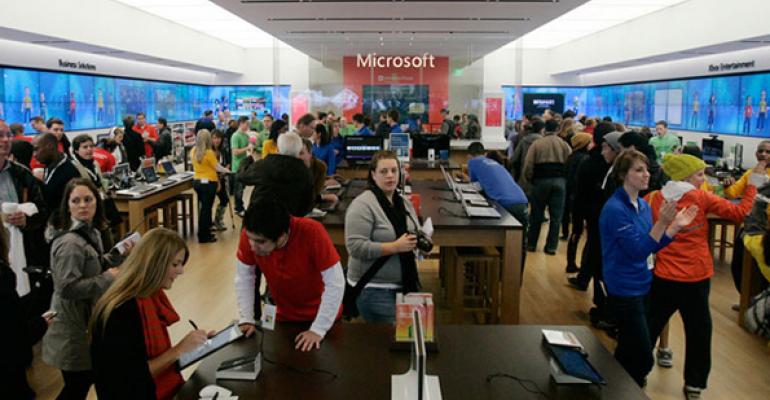 Microsoft’s eagerly awaited Surface with Windows 8 Pro hybrid PC device launched today and the 128 GB version immediately sold out at Microsoft Store and other retailers. This suggests that demand for Surface Pro is much higher than many anticipated, given the many months Microsoft had to prepare for this launch.

Surface Pro reviews have been mixed to positive, with most—including my own Microsoft Surface with Windows 8 Pro Review—dinging the device for its lackluster battery life of 4.5 to 5.5 hours, well below that of typical Ultrabooks. But the reaction in tech enthusiast circles, especially those with a decided anti-Microsoft bias, has been almost violent and mocking in its collective reaction to Surface Pro, as it was to Surface Pro’s predecessor, Surface with Windows RT.

The critics will be disappointed to discover that Surface Pro is in fact flying off the shelves, at the least the 128 GB version.

Based on the many emails I’ve received, it paid to shop early online. I heard from several readers who purchased the 128 GB version of the Surface Pro from Microsoft’s online store just after midnight ET and were able to complete the sale. But those who woke up and tried to purchase one at a normal hour were thwarted: The Surface Pro 128 GB is now listed as “out of stock” at the Microsoft Store and Staples. At the time of this writing, Best Buy reports having them for sale, but readers who attempted this purchase tell me this isn’t the case.

Those who show up at Microsoft retail store locations are reporting “Apple-like” lines. I can’t head into my local Microsoft Store because Massachusetts is under a “state of emergency” due to the blizzard that just dumped two feet of snow on the area. But, again, based on email and tweets, there are long lines of people hoping to get the 128 GB version. So head out early or don’t bother.

(Many people are reporting that third party retailers--Best Buy and Staples--had very limited stock of the 128 GB Surface Pro in particular. My sources have told me that this was their fault, not Microsoft's. But regardless of the cause, Microsoft Store locations have more of the devices.)

By the way, my advice is to get the 128 GB version. 64 GB SSD drives were never big enough for reasonable mainstream Windows use, while 128 GB has proven to work well over a long period of time. Plus, Surface Pro is expandable via microSD, which could prove helpful for those with lots of data. I suspect any shortages will be brief, and hopefully Microsoft will manage this better than Google has with its Nexus 4 smart phone, which was basically unavailable over its first two months in the market.

Update: The standard anti-Microsoft movement is busy trying to debunk this story because some Best Buys didn't get many (or even any) Surface Pro units yet. Fair enough. But Microsoft's online store got more than that, so no need to worry about whether this sell-out is genuine. I'm sure they could have sold even more if they could have delivered more to stores.

Update 3: Now the Microsoft Store online is reporting that the 64 GB Surface Pro is also out of stock. (Update 4: And just like that, it's available again. Fun.)