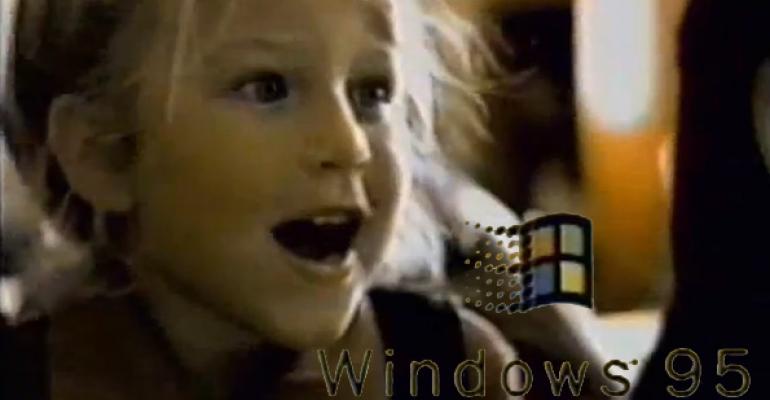 The first version of Windows I actually cared about

Windows achieved great success before the release of Windows 95, but it wasn’t truly a mainstream phenomenon until Microsoft finally hid the system’s MS-DOS roots and embraced a simpler UI. For me, it’s a bit more personal: As a long-time technology enthusiast, I had always viewed Windows and Microsoft with more than a bit of skepticism. But Windows 95 changed all that. Here for the first time was a Microsoft OS that was truly good.

Note: This week I’m taking my first actual vacation in over 10 years. Each day while I’m gone, I’ll be revisiting classic SuperSite articles from the past with additional commentary and imagery. This article is about events that actually predate the SuperSite, though I did previously write about upcoming Windows releases on my Internet Nexus web site.

Looking at the banner at the top of this web site, it may confused you to discover that I was not always a fan of Windows. Indeed, coming from the perspective of an Amiga enthusiast in the late 1980’s and early 1990s, I had nothing but disdain for Microsoft’s poorly designed and inelegant Windows. When Windows 3.0 rocked to great success in the early 1990’s, I was despondent. Windows was embarrassingly bad, and I pushed the Amiga on anyone who would listen. And many that would not.

My wife didn’t really care about technology—still doesn’t—but pragmatically wanted to get a PC that could run the same WordPerfect software she used at works. At the time, IBM was selling inexpensive PS/1 systems through Sears, and the version we purchased had a tiny grayscale screen (I want to say it was four shades of gray) that was certainly adequate enough for word processing.

That the PS/1 was a ludicrous piece of technology next to my cheaper but more impressive Amiga 500 is no doubt obvious. But it won’t surprise you to discover that I actually spent a lot of time with it regardless, with an eye on learning the in’s and out’s of MS-DOS and the PC. I taught myself how to write MS-DOS batch programming and created a DOS-based menu system that could be used to launch applications, ideal for my wife as she didn’t know her way around DOS. (I handed it out to friends, one of whom pre-loaded it on all the PCs his employer sold in the Boston area at the time.)

Two of these explorations played a big role in guiding my evolving opinion of the PC.

First, I tried the then-current version of Windows (3.0 or 3.1, I can’t recall) on the PS/1. It wasn’t just slow, it was unusable. When you clicked a menu with the mouse, the outline of the menu would draw, slowly, and then each item in the menu would slowly draw in over time. This system is still ridiculous, I thought.

And I of course looked at games. As any Amiga user can tell you, games were on the main strengths of that system—which was originally supposed to be an arcade game machine—and in those days the most impressive games were sideway scrollers. Many game and computer systems could display a sideway scroller effectively, but only the Amiga could do so with multiple levels of parallax scrolling and an impressive musical soundtrack. In the day, it was one of the more impressive visual effects around.

The PC, I knew, excelled at one game type that never really took off on the Amiga: Flight simulators. And while I was never hugely interested in such games, I recognized their popularity. During the time my wife owned the PS/1, however, terrible-looking but very playable sideway scrollers started appearing on MS-DOS via a growing shareware movement. And then it happened. One of the makers of these games, Id Software, which was then aligned with Apogee, started making what we now call first person shooters.

We didn’t have first person shooters on the Amiga. Indeed, the few first person perspective games, like Dungeon Master, were decidedly slow-moving, requiring you to advance down a virtual tunnel in short bursts, not smoothly. The Amiga could handle sprites and had tricks related to its original video game emphasis. But it didn’t have ways to seamlessly refresh the entire screen and create real time 3D effects.

Somehow, the wizards at Id figured out how to do this on the lowly PC. So even my wife’s ridiculous PS/1—a grayscale 286 machine—cloud play a game like “Castle Wolfenstein 3D” perfectly well (assuming you didn’t miss color). The Amiga had nothing like it.

It was a revelation. And in moving to Phoenix in 1993, I knew that I’d have to make the switch, drop the Amiga and adopt a platform that was both successful and future-proof. Commodore, which made the Amiga, had been in trouble for years and finally declared bankruptcy. And I built my first PC, a 386SX machine.

In the early-to-mid-1990s, there were a few choices. You could of course go with MS-DOS and Windows, or the Windows for Workgroups variant. IBM made OS/2, which many felt (correctly) was technically superior to Microsoft’s offering. I tried them all, and while I owned a few OS/2 versions, I could see the writing on the wall: OS/2 was going to be left behind as surely as was the Amiga before it. Many ex-Amiga users went the OS/2 route, but I always cautioned against this. Microsoft just didn’t seem beatable to me.

Two things brought me firmly into the Microsoft camp.

The first was an early beta version of what became Word 6.0. My wife worked at a technology training firm in Phoenix and got access to this beta because they were creating training materials. At that time, I was still using both an Amiga and my first PC, and the comparisons between this application and what was available on the Amiga was painful. Again, here was something on the PC, in Windows, that was dramatically superior to what I had used on the Amiga.

The second was Windows 95.

It’s a bit confusing to understand the exact order of things here, but in 1993-1994, I started working with Gary Brent, a professor who taught computer programming at Scottsdale Community College near Phoenix. I agreed first to help tech-edit a book about Visual Basic 3, and then write a bit of it, and then co-author it, and before I knew it I was the primary author on the title. I asked Gary later how he could possibly have known I’d be good at this kind of thing, and he unhelpfully told me that he could just tell.

Anyway, we worked on the VB book and then a book about Excel, and then one on Windows 95, which then was still called Windows 4.0 (and was codenamed “Chicago”). So we got into the beta through the publisher, and got an early version of the product. On CD. So I had to buy a CD drive for more PC. Again, these were early days.

Windows 95 was a revelation. Here, for the first time was a version of Windows that was both beautiful to look at and efficient to use. It was, I thought, a break from the past, a true 32-bit OS that would take computing into a new generation. (This was a bit incorrect, as I later discovered, but at that time, we didn’t know any better.) It was the first version of Windows I felt comfortable recommending to others. A page had definitely been turned.

Through the release of Windows 95 and into the next decade, there was a lot of talk about how Microsoft had “finally” caught up with the Mac—a popular bumper sticker of the day read, “Windows 95 = Macintosh 85”—but I more pragmatically believed that by bringing Mac-style simplicity to the masses that Microsoft had done something far more elegant and important than what Apple was doing, which required customers to spend a lot more money and give up application compatibility.

In fact, at a party near San Francisco in 1995 or 1996, I overheard two Bay Area Mac fans blathering about how much more technically advanced Apple’s products were than Microsoft’s. I injected that Apple only had to target a handful of very similar computer systems, which was hardly impressive. Windows, meanwhile, booted up on hundreds of millions of PCs every day, and just worked, despite all the myriad of hardware differences between each device. That, I said, proved that Microsoft’s engineers were indeed more technically proficient. I’ve been having my way with these types of people ever since.

In the lead-up to Windows 95, our publisher asked Gary and me if we’d writing something about the coming OS release for a newsletter aimed at educators. The resulting article, which I later republished on this site as Windows 95 Preview, contains some interesting comments about the transition from MS-DOS and Windows to Windows 95, especially if you consider them in the context of the current migration to the mobile- and touch-oriented Windows 8.

“Windows 95 offers the ultimate break from the DOS past while retaining a compatibility with DOS programs that was never possible with Windows 3.x,” we wrote. “A DOS program can run on the Windows 95 desktop in a window or in full screen mode. Multiple DOS programs can run simultaneously, each in its own fully configurable window. In many ways, Windows 95 is the best thing that ever happened to DOS.”

“A fully redesigned "document-centric" user-interface is easy to use and understand. The conspicuous Start button on the standard task bar begs to be pressed, revealing cascading menus containing shortcuts to programs, recently used documents, configuration options, and help.”

“Microsoft's plan is for Windows 95 to run at least as well on a 4 megabyte 386DX as Windows 3.x does. This is no easy task, as Windows 95 offers many times the functionality and usability of its forebears.”

“Windows 3.x frequently bewildered new computer users because it was non-intuitive. Windows 95 offers an obvious and accessible interface that will appeal to the power user and computer novice alike. Crossing into the world of computers has always been a big leap for the uninitiated, and interfaces like the DOS command line and Windows 3.x have done little to comfort new users.”

Of course, we know that Windows 95 was met by near-universal acclaim and was the subject of the industry’s biggest-ever launch event. Windows 8 has been somewhat less successful. But these transitions are difficult. When Windows 95 launched, only Apple had offered a simpler system in the Mac but priced it out of reach of mere mortals. Today, Windows 8 faces some formidable competitors in Android and the iPad, and they’re both easy to use and (for Android especially) very inexpensive.

The story of this transition has yet to be told in full. But in many ways, Windows 95 is the dividing line between an inelegant past and a more proficient 32-bit (and then 64-bit) era, and it was roughly the starting point of my own career writing about Microsoft technologies and supporting those who use Microsoft’s products. I’m not done yet.

A few scans of the original article…