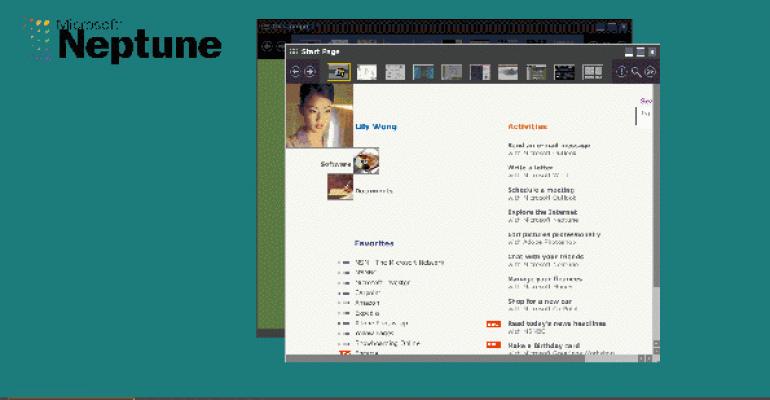 A curiosity with ideas that lived on in future Windows releases

When it was initially scheduled, Windows “Neptune” was designed as an early consumer-based version of Windows NT that would have followed Windows NT 5.0 (later rebranded as Windows 2000) and offered major advances in simplicity and ease of use. Ultimately scrapped when the transition to the NT codebase took longer than expected, Neptune inspired user experiences in Windows Me and future Windows versions, and led to the development of other consumer initiatives like Freestyle (Media Center).

Note: This week I’m taking my first actual vacation in over 10 years. Each day while I’m gone, I’ll be revisiting classic SuperSite articles from the past with additional commentary and imagery. This article is a bit different: It involves a Windows version codenamed Neptune that was never released and only existed on the periphery of what I was writing about in the early days of the site.

Neptune was conceived in the late 1990s as Microsoft plotted its transition from the DOS-based Windows 9x codebase to that of Windows NT. It would have utilized the NT kernel and at one point might have shipped as the consumer version of NT 5.0. When the goals for Neptune proved to be too far-reaching for that schedule, Microsoft briefly scheduled an interim consumer release, called Windows NT 5.1, codenamed Asteroid, with Neptune planned as a possible NT 6.0 release. Asteroid was cancelled and replaced by Windows Me, and Neptune was ultimately cancelled too, with Windows XP (“Whistler”) becoming the next major Windows release (and the first to satisfy Microsoft’s goal of having both consumer and business releases based on NT).

From a high level, Neptune was all about simplicity, and a sort of user experience “dumbing down” that we now see realized in the touch-based Metro interface in Windows 8. If you could operate a home appliance, then you would be able to operate Neptune. It would provide a task-based interface that Microsoft continued developing through later Windows projects, as well as activity centers that consolidated similar tasks into centralized user interfaces that are in fact very similar to the hubs we see today in Windows Phone.

As with Longhorn before it, the early concepts were beautiful but the actual delivered code was pretty terrible looking. Here's a gorgeous example of a prototype that naturally excited technology enthusiasts.

But by the time it got to non-working demo in real code, the look and feel were decidedly less interesting.

As an alternative to the standard Start menu, Neptune would offer a Start Page or Starting Places interface that could work in full-screen mode, as an Active Desktop, or in a floating window.

A Kid’s Start interface would simplify things further for children.

A variety of the task-based activity centers were planned. Some we can see in the early shots of Neptune include Photo Center, Music Center, Communication Center, Games Center, and Help and Support.

Help and Support still exists in Windows 8 today, but the other planned activity centers never really saw the light of day in shipping Windows releases. That said, Windows Media Player and Media Center both shared design elements from activity centers, and many of the step-by-step wizards in Windows today are indirect descendants.

Windows Media Player was arguably an activity center as well

Neptune would include a search engine—shades of Windows 8.1!—that would “look for the information everywhere: Your PC, The PC at work and the Internet.” It would let you ask simple questions such as “When was the Mona Lisa painted?” Neptune would also provide a “Recent” interface and keep track of and display recent user actions so you could easily get back to something you had done before.

As Neptune features and ideas merged into Windows Me and other projects, Neptune lost both its name and many of its high-minded goals. And the features that ultimately did ship in Windows were of course significantly detuned. I wrote a lot about Microsoft’s task-based designs back in the day, most notably in Activity Centers: A Windows Me Technology Showcase and Activity Centers Preview—but it’s pretty clear that the ideals, while well-intended, were often too difficult to transition into shipping product.

Ultimately, Neptune--like Longhorn--was the product of good intentions but no real follow-through.

Here are a variety of Neptune screenshots that span a number of years and product versions.

These UIs were briefly used in Whistler (XP) as well.