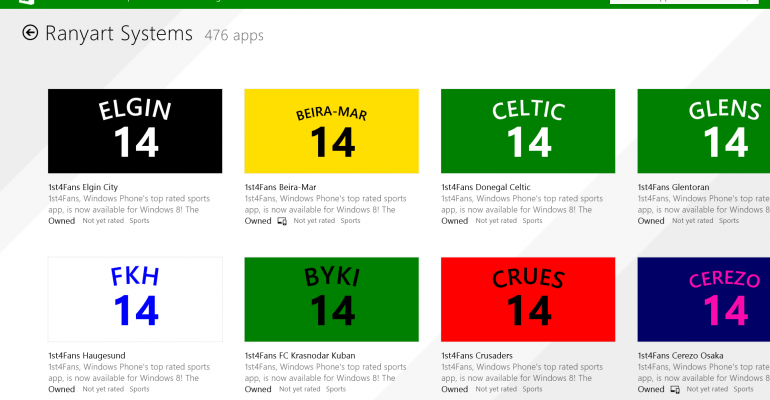 Spammy apps in the Windows Store

Yesterday Rod wrote about the big deal Microsoft is making about web apps coming to Windows 10 and this comes on the heels of the recent news that the Windows Store has now passed the 200,000 apps milestone.

As Rod said in his post app store counts are not at issue here – it is the apps which are available that are.

If an individual uses a certain bank and they do not support the Windows app platform then that is an app gap issue for that individual.  Insert any service or business you use into the equation and it does not matter if there are 50 or 50 billion apps – you have an app gap.

There is another issue in the Windows Store that has been mentioned in the past but with this recent milestone being announced it is time to bring it up again.

Now, I am not talking about copycat and fake apps that use official logos, Microsoft knows about these and has taken steps in the past to deal with them.  More needs to be done in the approval and app screening process to stop them from even getting placed in the store to begin with.

I want to actually bring up the issue of apps that are created in bulk. They typically use some type of a template, serve the same purpose and simply have a separate app published for each individual instance of the subject being covered.

In less than 30 minutes today I came across five examples of these types of apps in the Windows Store:

Each and every one of the above examples should ideally be consolidated into single app and then have a drop down box to select the item and subsequently display the information.  Each could even be categorized to help trim down the cascading menu options in the app. Maybe a reader who does development can comment and let me know this is impossible and thus why apps must be published like this however, something tells me the development tools are not the issue here.

In addition to the copycat and fake apps – these type of apps should be cleaned up in the store, or at the minimum, not be allowed in the future.

Ultimately, allowing this style of app publication simply gives your competitors a reason to point at your app store and discredit it.

The challenges are difficult enough without providing fodder for others to use against your efforts.