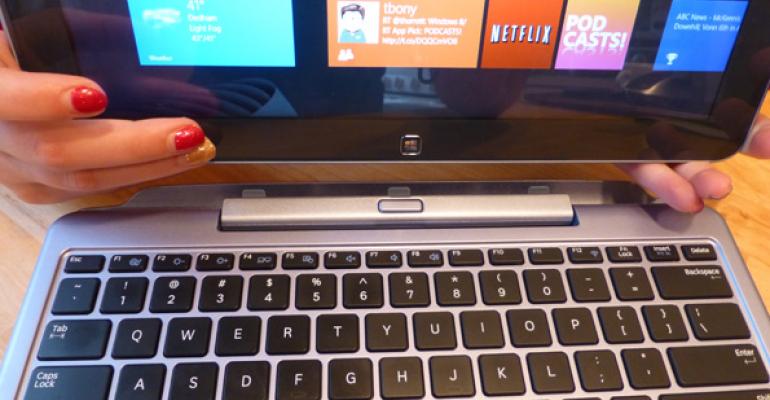 For the past few weeks I’ve been trying to use a Windows 8-based hybrid PC, a Samsung ATIV Smart PC with keyboard dock that resembles a normal laptop when used together, as much as possible. Based on Intel’s “Clover Trail” chipset—an Atom system on a chip, or SoC, design—the ATIV combines netbook-class performance with fan-less and stellar ARM-style battery life. So it’s a compromise. The question is whether it’s a compromise that makes sense for normal users.

I previously came to the conclusion that the Clover Trail chipset was superior to ARM and thus the ATIV was ostensibly a better choice than Microsoft’s Surface with Windows RT for most users. That is, it offers better performance than Surface, with the same fan-less design, and has full compatibility with Windows desktop software. It even edges out Surface on battery life, which I find pretty darned impressive given the months of ARM propaganda that was foisted on the press before the Surface launch.

Check out Windows 8 Architecture Wars, Part 1: Clover Trail vs. ARM if you are interested in how I compared the two.

That is, while the ATIV makes more sense than any Windows RT device, it’s still a netbook-class system. Its Atom-based chipset is fairly woeful, it only includes and supports 2 GB of RAM (just like current ARM-based Windows RT devices). The ATIV has some weirdness that is particular to its own design, including its plastic look and feel, and Samsung’s oblivious use of silly, tethered covers on every single port. I discussed these and other aspects of this device in Review: Samsung ATIV Smart PC.

What’s changed since then is that I finally got the ATIV Smart PC Keyboard Dock that turns the ATIV from a standalone tablet device into what I call a hybrid PC, what Intel calls a “detachable,” and what Microsoft calls a “convertible.” (Depending on how you buy the ATIV, you can in fact get this keyboard dock with the device. I happened to buy them separately.)

I noted in my review of the ATIV that this 11.6-inch tablet weighs just 1.7 pounds, which is pretty amazing given that the Surface Pro, which has a smaller 10.6-inch screen, weights more at 2 pounds. Of course, adding the keyboard dock to the mix ups the weight significantly. The dock itself weighs 1.6 pounds, about the same as the tablet itself, so the combined weight is 3.3 pounds.

Compared to the average weight of portable PCs from just a few years ago, this isn’t terrible. But holding this hybrid PC, I was struck by how heavy it seemed, so I compared the weight of the ATVI plus keyboard dock to my daily-use Ultrabook, a 15-inch Samsung Series 9. In the hand, the Samsung felt a tad heavier, but of course it’s also wider and taller (but thinner) so I wasn’t positive. Turns out it weighs 3.6 pounds, just .3 pounds more than the ATIV plus keyboard dock. That it has a much bigger screen and higher resolution (1600 x 900 vs. 1366 x 768) is perhaps notable as well. For my needs, the Samsung continues to be the right choice.

That said, the ATIV is really a tablet, so you can always separate it from the keyboard dock and use it that way. And on a tight airline flight, this design will be better for enjoying videos and even playing games.

It’s also worth pointing out the oddness of having all the computer “guts” be in the screen part of this detachable device. Though the ATIV itself supposedly only weighs a bit more than its keyboard dock, it seems heavier and denser somehow, and when connected it feels top-heavy. It’s stable and doesn’t tip over, but I suspect that is due largely to Samsung configuring the open angle of the display properly; if you could tip it back further, I bet it would in fact fall over.

The keyboard on the keyboard dock is decent and just about as good as that on the Ultrabook I use. (They’re both Samsung devices so the keyboards are in fact almost identical, with the ATIV version being a hair less wide.) Wrist support is passable but not great, due to the low angle and the shallowness of the wrist rest.

The built-in trackpad is an atrocity against mankind and needs to be stopped. I constantly brush it while typing, sending the mouse cursor flying to a different part of the document and ruining the typing experience. Worse, I also often engage the trackpad’s Windows 8 gestures, most often navigating to a different app. Getting frustrated by this, I finally used the Mouse control panel to try and disable the trackpad, but in a first, that didn’t work even those it was listed as disabled. So I nuked it from space using Device Manager. This is a ridiculous necessity.

Like the tablet, the ATIV Smart PC has silly covers its two USB 2.0 ports, one on each side. I’m tempted to just rip them off the dock and have no idea why Samsung would do this. There’s also a power port, which makes sense since the tablet’s power port is on the bottom and inaccessible when docked.

If you can get past the trackpad and USB port covers, the keyboard dock presents a nice preview of the future of computing. The ATIV performs fine for everyday tasks like web browsing, email, and typing this article in Microsoft Word 2013, with no pauses or slowdowns at all. It’s not exactly a Photoshop monster, with just 2 GB of RAM, but I do use Photoshop Elements on the device and while launch times are slow, it gets the job done.

Where Clover Trail’s limitations pop-up is in what, for me, is normal multitasking. With Chrome (5 tabs), Word, Photoshop Elements 11, and iTunes 11 all running at the same time, CPU, memory, and disk utilization starts spiking and things begin to slow down a bit. That said, I can continue typing in Word without pauses. (There are slight pauses when you use ALT + TAB to switch between applications.)

Overall, it’s clear that Clover Trail is not ideally suited for power users, but I bet this is just fine for the average user, and of course those who use it as a tablet and stick to Metro apps will benefit from Microsoft’s new smart phone-like power management capabilities as well.

More to the point, I can and do get work done on this machine. I could take it on the road and benefit greatly from its tremendous battery life, a keyboard that is almost as good as the one I use regularly, and compatibility with the desktop applications I still use and prefer. This machine—or hybrid, really—speaks to that “no compromises” promise that Microsoft has made, though of course in its current form, there are indeed compromises. But they impact mostly those with particular and high-end needs.

We know that things will always get better, and as I discussed in New Intel Chipsets Spur Hope for Windows 8 Surge in 2013, this conversation will be quite different a year from now. In late 2013, Intel will replace Clover Trail with a new Atom SoC that will allegedly more than double the computing performance of the current platform. Meanwhile, a fourth generation Core processor, the successor to today’s Ivy Bridge that is codenamed “Haswell” will provide mainstream PCs and devices with much better battery life and some of Clover Trail’s power management prowess.

Price is still a concern. This machine—which, again, is essentially a modern netbook from a technical perspective—costs $600 at Amazon without a keyboard dock, while buying both will set you back about $730. (The Microsoft Store sells them together in a version with AT&T 4G LTE capabilities for a whopping $900.) That’s a lot of money for what is essentially a low-end PC. Granted, its multi-touch/tablet capabilities, fan-less operation, and stellar battery life should factor into any buying decision. But still.

At this price, I’d like to see 4 GB of RAM and a better processor, but of course that would likely entail a fan, which would of course ruin the whole experience. This is one of the reasons we’re all so eager to see Surface Pro, which uses what could be an innovative active cooling system in which heat is vented through slots in the sides; early reports suggest this machine is silent or nearly so. Surface Pro starts at $899, though a version with a real keyboard will be a bit over $1000, which is quite a bit more expensive than the ATIV plus keyboard dock and other related systems.

We’ll know more about Surface Pro, and a coming generation of Windows 8 PCs and devices, soon. In the meantime, a hybrid PC that is based on Clover Trail like the ATIV Smart PC I’m using will work well for many users and is, I think, our first glimpse at the volume PC market of the near future. But it won’t satisfy the needs of true power users.