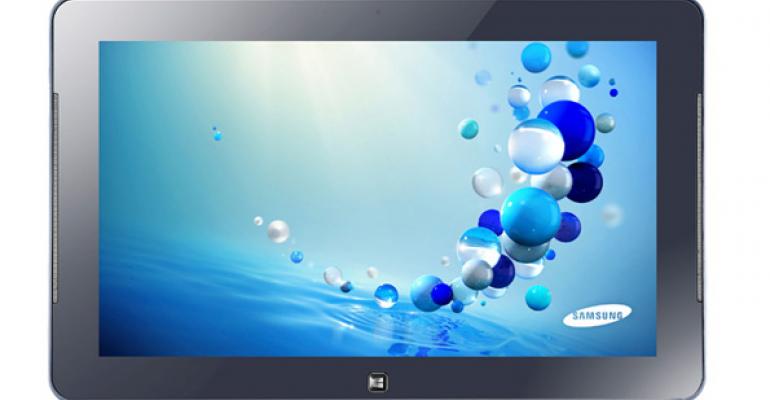 The Atom “Clover Trail” chipset has won me over, but is the ATIV is a low-end PC or a high-end PC companion?

I admit to initially being a bit ambivalent about the Samsung ATIV Smart PC, as I was more concerned about its Atom “Clover Trail” internals than about the device itself. But after using it for the past week, I’ve come to understand two things. One, Clover Trail makes ARM irrelevant for Windows. And two, the ATIV is a pretty sweet Windows device.

But it’s also a sweet Windows device with ARM-like limitations. Like ARM, Clover Trail is a 32-bit platform, and devices based on this platform—including the ATIV—ship with just 2 GB of non-expandable RAM. And like other Clover Trail-based systems, the ATIV comes with a relatively tiny amount of onboard storage (64 GB) and only a single USB 2.0 port: Clover Trail—again, like ARM—doesn’t support USB 3.0.

Now, where some see limitations, others see simplicity, and an argument could be made that the ATIV’s lack of, well, stuff makes it more desirable, not less. After all, this machine gets a magical 9+ hours of real world battery life, and it does so while running perfectly cool to the touch: It never, ever heats up, and no fan mars the experience. It’s completely silent.

(Be sure to check out Samsung ATIV Smart PC: First Impressions and Photos.)

So the question remains. Having eliminated ARM, and thus any Windows RT-based device, from the running, is the ATIV Smart PC a low-end PC, one that you might even use as a replacement for some current portable PC? Or is it simply a PC companion, something akin to an iPad, Android tablet, or Surface with Windows RT, a machine that’s mostly for media consumption but occasionally for work?

I have the answer. But you’re not going to like it.

If you’re like me, someone who needs a real computer with the ability to run multiple Office applications, web browsers with dozens of open tabs, Photoshop, Visual Studio, and to do all that at the same time, no, the ATIV is not a PC replacement, nor is any other Clover Trail-based device. Instead, you’d use this a secondary, companion device. It’s not that the Atom/Clover Trail processor isn’t powerful enough, it’s that the rest of the system—the RAM, especially, but also the storage and system expandability—falls short.

If, however, you’re a more average consumer, someone who only runs a few apps at a time and perhaps just needs web browsing, email, and Facebook, well heck. The ATIV is a more than adequate alternative to an iPad or Surface, and one that is compatible with the applications you own, know and use. Unlike ARM. It could be, in effect, a real PC within the context of how you use a PC today.

Consider how different this device is from the Lenovo IdeaPad YOGA I just reviewed. In my opinion, the YOGA is an Ultrabook first and a device second because the machine’s secondary, tablet-like forms are not as elegant as using a real tablet. By comparison, the ATIV is a tablet first and, via an optional keyboard dock (or, less elegantly, Bluetooth keyboard and mouse and some form of stand) a laptop-like contraption. Where the YOGA is portable computer first—a PC—the ATIV is a tablet first—a device. So one’s a PC and one’s a device, but in keeping with this new generation of Windows 8 hardware, each can transform into the other to some degree. But each is more comfortable, I think, in its primary role.

Whatever your needs, if a device that is tablet first and PC second is what you’re looking for, the discussion changes to ATIV Smart PC specifics. And in my testing of this device over the past week suggests that, weird platform limitations aside, this is a pretty nifty machine.

Some will dock Samsung for using plastics in the ATIV casing, but as a long time user of Samsung phones, I’m used to the material and I don’t personally associate it with cheap. Regardless of your feeling about plastic, however, one thing is indisputable: This is a very light device, weighing in at 1.7 pounds. Yes, 1.7. Now, granted, the keyboard dock would up the weight, but if you’re going commando-style, that’s a small price to pay for a device with a huge 11.6-inch widescreen display. Did I mention the 9+ hours of battery life?

On the minus side, Samsung has a weird infatuation with port covers that I don’t agree with. The USB, HDMI, and SD slots are each covered with a silly, hard-to-pull-off cover, as is the SIM slot if you get a model with cellular broadband. It’s just … awful.

I mentioned some of the specs already, but let’s spell them out a bit better to get a more complete picture. That Clover Trail processor is technically a 1.8 GHz Intel Atom processor Z2760, a dual core System on a Chip (SoC) design with integrated graphics that makes the thin, light, and fanless ATIV possible. If you’ve been following along as PCs got faster and more powerful on a fairly linear curve for the past years, well, this Atom is on a different trajectory. It’s a 32-bit design, not 64-bit, meaning it can address up to 4 GB of RAM only, and Windows itself can only address ~3 GB of that. So it’s aimed at small, highly portable devices, not gaming rigs.

But the ATIV, like all other current Clover Trail devices, comes with just 2 GB of RAM, and its shared with the graphics. The memory is not expandable, and even given the limitations of 32-bit Windows versions, I would have appreciated 3 or 4 GB of RAM instead. In fact, it’s hard to calculate what a difference that would have made for me. (I’m curious if more RAM would have impacted battery life, however.) But this speaks to the machine’s device aspirations.

64 GB of storage I can live with. Like many, I made what was originally a difficult transition from the 500 GB hard drives of a few years ago to the much smaller storage allotments of SSDs (or, in this case, eMMC solid state storage). Do more with less.

The screen is brilliant. At 11.6-inches, it runs at a fairly pedestrian 1366 x 768, but don’t be put off by this: This is a great resolution for this screen size and is what I consider to be Windows 8’s “native” resolution, meaning that it is ideal for Metro-style apps.

That said, one of the problems with the ATIV is that it’s almost too big as a tablet. It’s much wider than a Surface, iPad or Amazon Kindle Fire HD 8.9, and while I have little issue carrying it around given the light weight, even I—with big hands—have a bit of trouble playing touch-based games on the expansive screen. Be sure to test one in-store before buying.

Beyond this, you get Wi-Fi (802.11a/b/g/n) and Bluetooth, and you can add Ethernet through a USB dongle, which kills the one available USB port. Two USB ports would be better, and a dock would be even better still. Aside from that single USB 2.0 port, there are also micro-HDMI, headphone, microphone, and microSD ports. There are stereo speakers on the front of the device, next to the screen, which sounds pretty darn good.

Oh, there’s a stylus too. This is a big deal for some people, I know, but the awful version Samsung bundles with the device—it tucks neatly into one corner of the machine when you’re not using it, which will be all the time—is hardly worth discussing. It’s small, hard to use, and seems to lag behind what you’re actually writing. I found it frustrating.

Performance in day to day tasks is stellar, assuming you’re treating it reasonably and not trying to play Black Ops 2. (Which is undoubtable impossible.) The Windows 8 UI is literally fast and fluid, and the device overall performs much better than the ARM-based Surface with Windows RT.

I didn’t get this device with a keyboard dock, which is a $100 option. I’ve heard that it’s not great, and that the lack of a second dock-based battery lessens its value, but if I could do this over again, I’d get one. At the very least, it would protect the screen in transit, and a keyboard of any kind, even a middling one, would be good for those situations where you just need to type. My current solution—a generic tablet stand, a keyboard, and a mouse, is non-optimal.

The other issue I feel compelled to mention is the price. While the ATIV Smart PC is not unique in this regard—all first-gen Clover Trail and ARM devices are way too expensive in my opinion--$650 to $750 is a lot of money to spend on what is essentially a low-end PC (or an iPad-like device). It’s pretty clear to me that Intel and its PC maker partners are very much interested in moving away from the low-price model established by the netbook, but these devices aren’t 20 percent more than netbooks, they’re almost twice as expensive. It’s a lot of money, especially when a higher resolution and perfectly good iPad starts at just $500.

Still, for those who wish to stick with the Windows ecosystem and yet are looking for something highly mobile and touch-based, the Samsung ATIV Smart PC is a great choice, and its Clover Trail-based innards, even given the limitations, are superior to ARM with Windows RT across the board. The first generation of anything is tough, of course, but the ATIV and Clover Trail have really won me over. Recommended, assuming the low system resources and price don’t scare you away.