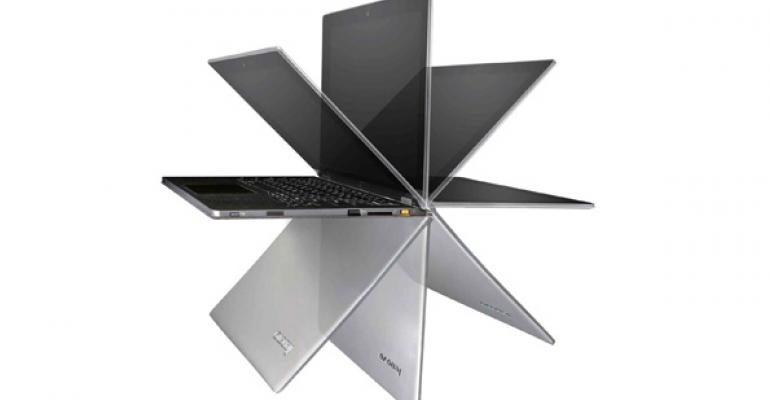 The Lenovo IdeaPad YOGA is a solid entry, one that makes the multi-touch promise of Windows 8 a reality is ways that are both useful and fun

When Lenovo first announced the YOGA, tech enthusiasts lighted up like Christmas trees: Here was a fun and crazy Windows 8 device that could bend it like Beckham and transform like Optimus Prime. But in its final shipping form, the Lenovo IdeaPad YOGA is simply an Ultrabook that you can also use in various tablet configurations.

If that sounds a little downbeat, relax: Like all Lenovo products, the IdeaPad YOGA 13 is a solid, well-designed machine. It features a slightly-modified take on the superior ThinkPad keyboard that I love and a great, multi-touch 1600 x 900 screen. This is a solid mobile PC, and one that can, yes, contort into a tablet-like form factor (a few, actually) for those odd moments—an unfortunate coach flight, perhaps—where you just want to watch a movie or consume other content.

(Be sure to check out Lenovo IdeaPad YOGA Photos for my own pictures of this device.)

But for all the hype, the YOGA is basically just an IdeaPad U series. Lenovo bills these machines as Ultrabooks, which they are, but they’re much blockier, and a bit heavier, than most Ultrabooks. Where most PC makers go for the Macbook Air-style tapered look, Lenovo has—to its credit—decided to think differently. And the YOGA, like many IdeaPad devices, eschews the me-too for a unique look.

The YOGA is actually pretty thin, and compared to other Ultrabooks I’ve got here, it’s as thin as anything else in the market … in the back. But because the YOGA doesn’t taper down to a point in the front and is instead uniformly thick, it gives the appearance of being thicker overall than the competition. I don’t dislike that. But the weight differential is a real issue: In a market where every ounce counts, the 13-inch YOGA weighs 3.4 pounds, much more than the Samsung Series 9 (2.55 pounds).

What you give up in lightness, however, you gain in versatility. You get two USB ports (one USB 3.0, one USB 2.0), plus a full-sized HDMI out port. Dedicated volume and mute hardware buttons. And a keyboard that is only a million times better than the one in the thinner and lighter Samsung.

Oh, and the YOGA sports a delightful 10-point touch screen display, which would be notable in any circumstances. But it’s attached to a set of unique, multi-function hinges that let you do far more than hyper-extend the screen, as is possible on many modern portable computers. No, this thing is a professional gymnast: It can bend a full 360 degrees.

Lenovo describes this YOGA’s screen capabilities as being multi-mode, in that there are four main forms with which you will use the device. The first, of course, is the standard Laptop mode, the normal way we’ve been using these devices for decades. But thanks to the unique hinges, you can also move the screen back in some additional ways. The first is a new content consumption mode, in which the device body resembles an inverted V. Lenovo calls this Tent mode for obvious reasons, and you may use the device this way to interact with apps.

The second new mode, in which you invert the device and place the keyboard on the bottom, is called Stand mode. Like Tent mode, this mode is for content consumption, but this time it’s more typically for passive consumption, such as when you’re watching a movie or are generally not interacting with the screen. (Tapping the screen in this mode makes the screen wobble. And honestly, I’m not thrilled with putting the keyboard on some surfaces.) It’s also a nice choice for small presentations.

And finally there’s a standard Tablet mode, where the screen is spun all the way back and you use the device like a thicker-than-normal (and bigger and heavier than normal) slate tablet. This is similar to how we used convertible tablets back in the Tablet PC days.

Switching between these modes is natural and easy, and while most YOGA users will likely stick with the standard Laptop mode for the most part, it’s nice to have the options. That is, of course, the point of this device. But one real nicety is that the hardware and software work together to accurately pull up the onscreen keyboard only when needed: You’ll get it in Tent, Stand, and Tablet modes, but if you’re using the machine traditionally, you can just use the real keyboard and not have to deal with the virtual version popping up unexpectedly. Nicely done.

Beyond that obvious selling point for the YOGA, Lenovo’s latest IdeaPad also provides a solid offering across the board. My test system came with a 1.7 GHz Intel Core i5-3317U processor, 4 GB of RAM, and a 128 GB SSD, and it was incredibly responsive. (That said, Lenovo’s strange divvying up of the SSD was not appreciated: Inexplicably, only 64 GB of the 128 GB of storage is allotted for normal use.)

The YOGA comes with a 64-bit version of Windows 8, but it’s the core version, not Pro. The system boots in less than 10 seconds, which is wonderful, but it resumes from sleep in a second or two too, something you’ll experience more frequently. (On a side note, the power button is curiously located on the front lip of the device, under the left palm rest. I admit it took me several frustrating minutes to find this button initially.)

Lenovo bundles useful utilities with its ThinkPad products, but as an IdeaPad, this unit came with oddball entries such as Absolute Data Protect, Lenovo Motion Control (for Kinect-like gesture control), and the terrible Intel AppUp store. Weird, and to be honest, I tried to ignore most of it.

It took me a little while to get used to the keyboard, but that’s because I’ve using Samsung’s lackluster keyboards for too long. Lenovo continues refining its AccuType keyboard, and the version in the YOGA is indeed quite good. The touchpad supports Windows 8’s multi-touch gestures out of the box, and as with other laptops, this caused many an unintended onscreen action since I’m clumsy that way. You can turn it off in the Mouse control panel if you don’t get used to it, or configure it to your liking.

Battery life was about average for Ultrabooks, if my two Samsung Series 9 machines and ASUS Zenbook are any indication: It gets over 6 hours of life on a charge.

Oddly, I couldn’t find my test machine on Lenovo’s site, nor could I upgrade any to these exact specs. But a version with 8 GB of RAM (not the 4 GB I see) costs $1099, with the base YOGA costing $999, above average for traditional Ultrabooks. Lenovo also sells a high-end version with an i7 processor and Windows 8 Pro for $1500. There will eventually be a more colorful version, too: My silver-gray unit was pretty pedestrian looking, but I’m really interested in seeing the orange model.

Overall, the Lenovo IdeaPad YOGA 13 is a solid entry, one that makes the multi-touch promise of Windows 8 a reality is ways that are both useful and fun. This is an ideal choice for those who need a traditional Ultrabook most often, and value the typing experience and build quality over light weight, but still want to use a single device for entertainment and content consumption purposes as well. The ability to transform this device into other form factors is as wonderful on the couch as it would be in the tight confines of a coach airline seat. And that functionality, combined with Lenovo’s historic strengths, makes this IdeaPad YOGA recommended.