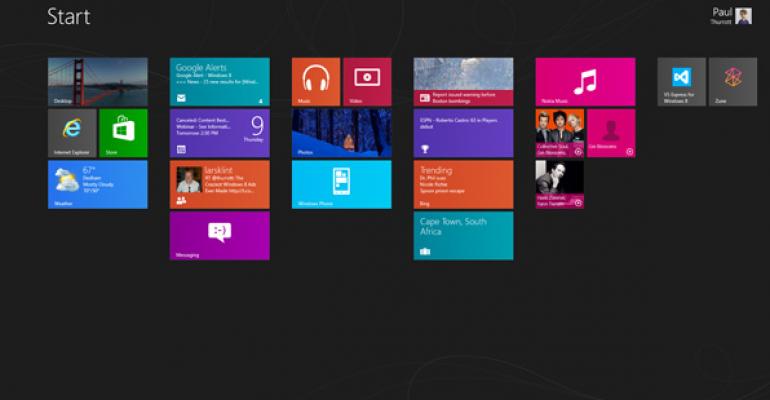 (Re)Start Me Up: The Great Windows 8 Debate

Everyone has an opinion about the “missing” Start menu and Start button in Windows 8. Here’s mine

Microsoft’s decision to remove the Start button and Start menu from Windows 8 is either the most forward-leaning decision the company has ever made or a bone-headed move that has alienated some customers forever. Here’s what I think about this.

I had to get this one off my chest. We’re at the point now where taking a stance on the Start button/Start menu stuff in Windows 8 is an opening for others to ridicule and denounce. So let me take a stance on it for a change. And you guys can direct your ire at me and not at each other for a change.

Since that is not what Microsoft did, however, and since they will certainly not be separately out the OS in that fashion, let’s think about this in the context of reality.

First, the easy one. The Start menu is not coming back, nor should it. The new Start screen is a superior app launcher, and if you’re tied to the desktop, you should be using taskbar application and web site pinning anyway … as you should be doing in Windows 7. Here, there is no meaningful loss of functionality in Windows 8 at all: Application launching works as before (taskbar) and the other Windows 7-era Start menu functions are all in better and more consistent places. Done.

As for the Start button, Julie Larson-Green noted this week that things would change thanks to customer feedback. My gut feeling is that bringing back a Start button is also unnecessary, and unlike most of the complainers I actually use Windows 8. But with the understanding that listening to customers is always a good thing, some transitionary plan is perhaps in order. My advice—worthless at this point since those decisions are made—is that Microsoft should simply make a Start button an option you need to enable to use. It shouldn’t be there by default unless you upgrade from Windows 7.

In a perfect world, Windows would meld to the hardware you’re using. On a tablet, things would work as they do now, and on a traditional PC, you’d boot to the desktop and have a Start button.

This is not a perfect world. And returning the Start button (or the Start menu) to this system is not going to “fix” Windows 8. Frankly, I’d rather see Microsoft improve the Start screen than worry about this Start button and Start menu silliness.

But customers have spoken. Regardless of my opinions—or yours—the company is right to respond accordingly.