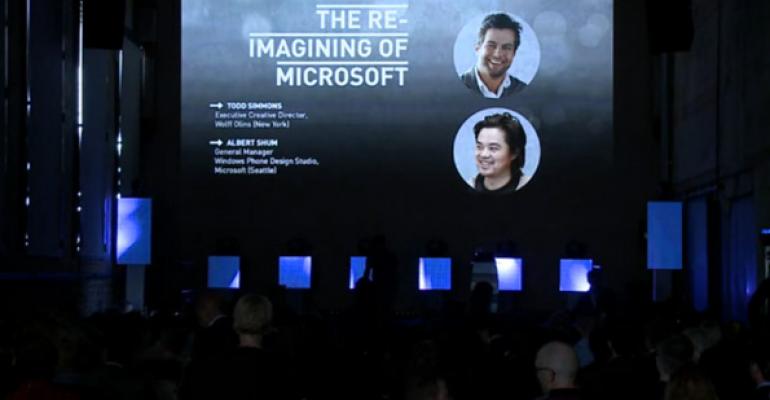 You’ve heard the term “reimagining” applied to Windows 8, of course, but it’s also something that Microsoft has applied to other products and services, and even to its own brand. This week, in what I believe to be a fairly unprecedented though very quiet revelation, Microsoft trotted out two of the people, Albert Shum and Todd Simmons, who have spearheaded this amazing change. And what the reveal is fascinating indeed.

On background, Albert Shum is the general manager of the Windows Phone Design Studio at Microsoft and he’s the personal most directly responsible for the Swiss Design-influenced “Metro” design language that has since been used across a variety of Microsoft products and services. To me, Shum is a bit of an enigma. I like the Metro design, generally, and certainly the philosophy behind it. But Shum spends a bit too much time explaining why this approach is correct, whereas I feel that truly well-designed products need no explanation.

Todd Simmons is entering my radar here for the first time. He’s the Executive Creative Director of Wolff Olins, the “international brand consultant” that Microsoft hired a few years back to help it remake its public image. Its work can be seen most obviously in the marketing materials—TV and print ads and more—that it helped Microsoft create for Windows 8. More on that in a moment.

Shum and Simmons recently spoke together in Oslo, Norway of all places and a video of this presentation, called The Re-Imagining of Microsoft provides a tantalizing glimpse at how Microsoft remade itself across the board, “reimagining” not just its various products but also how it presents and markets them to the world. With the negative reaction to Windows 8 as an obvious backdrop, it is fascinating to see these guys explain why they did what they did.

You should watch the video. But here are some of the amazing highlights from this presentation.

Microsoft sought outside help to remake its image. Seen as dowdy, huge, and slow, Microsoft sought the help of the “international brand consultants” at Wolff Olins to collaborate on a complete remake of its products, services, branding and image. You can see the results in everything from actual products—things like Windows Phone and Windows 8, which are distinctly different from the firm’s traditional software catalog—to the new logos for the company and its products. Simmons says that he and Shum have worked together, from outside and within, respectively, to “transform” Microsoft. “It’s a journey,” he says, “but it’s never finished.”

The presentation. In a pre-talk interview, Simmons says the goal of the presentation is to share some of their progress in remaking Microsoft and tell the story that people haven’t yet heard.

Understanding Microsoft. “There’s nothing ‘micro’ or ‘soft’ about Microsoft,” Simmons notes, with a backdrop of Mount Rainier and the words “big” and “hard” gracing the screen. Microsoft is a behemoth of many, many businesses, with enormous scale, making change difficult. That said, the company is in the midst of its big change ever, internally, externally, with stores, and with big bets. Innovation requires taking risks, Simmons said. But the rewards are potentially huge. “Microsoft has been a bit of a whipping boy over the past several years,” he says, noting correctly that we’re now in a battle of ecosystems. Further complicating things, Microsoft is made up of many $1 billion+ businesses. Getting them all moving together—reimagining all of Microsoft simultaneously—is an enormous task.

The perception of Microsoft. Echoing sentiments I’ve expressed many times, the public, external perceptions of Microsoft are at sharp odds with the competitive and aggressive people who work there. “It’s an amazing company full of incredibly smart people doing radically new things,” Simmons said. Which is not exactly the way Microsoft is typically described by those who, frankly, don’t know a thing about the company. So the start of the reimagining of the company was for employees first, not consumers.

Speed to market. Microsoft is competing in fast moving markets and speed of innovation is a huge challenge. In the past, Microsoft could work on a product for years, release it, and let it sit there for years. Now it needs continuous innovation in shorter spans to be competitive. Microsoft’s size is an advantage, not something to be shy about or embarrassed by.

Microsoft vs. Apple. Simmons drew some interesting comparisons between Microsoft and Apple. In his view, Apple is, well, an apple, or a single fruit, where each of its products is in effect just another apple. But Microsoft is a big bowl of fruit, where each fruit is a standalone business and the mix of that fruit is a diverse corporation, not a single thing. Each can be viewed separately, or you can consider the entire thing as whole. “Microsoft is more complex as a business,” he said, adding that it is not, however, a monolith. “It’s a company of companies.”

It’s all about design. I’m a bit leery of design-speak, and there’s a lot of it in this talk, as there always is when Shum’s on stage. He shows a few internal videos that the Microsoft geeks will croon over, but he also repeats a lot of the same too-elaborate explanations that he seems to trot out each time he appears publicly: It’s about being “pride in craftsmanship,” being “digitally authenticate,” and so on… This part wasn’t new. But the notion that design is the middle ground where both engineers and marketers can communicate most effectively makes some sense. Simmons calls this approach “Brand OS.”

Brand. Simmons offered something new (to me) about branding, too: “Your brand is exactly what people say it is at any given time,” he said. “You can’t define it and push it out. The good thing is, you can change that perception as quickly as you made it [initially].” In other words, people have viewed Microsoft as a slow follower for years, but that perception can be changed. That is part of the job Simmons’ firm was hired to accomplish.

Where to start. Windows was the obvious choice as the starting point for reimagining Microsoft, since so many people associate Microsoft and Windows so closely. “We knew we wouldn’t be able to change anything if we couldn’t change Windows,” Simmons said. “Windows is a sort of proxy for Microsoft, the head that wags the tail. Windows is the delivery mechanism of the whole Microsoft ecosystem, so we had to start there.” With over a billion users, there is huge risk in remaking Windows, he acknowledged. But it’s also a great opportunity.

Strategic shifts. These terms are important to consider when you evaluate the changes we see in Windows and other evolving Microsoft products: People-centric, advocates, stories, seducing, relationships, tangible, coordinated, influential innovation, universal, desired, and consumer-friendly. “Microsoft was in the habit of version branding, as I call it,” Simmons said. “Go from a sales mentality to seduction; let the products speak for themselves.” The three main drivers are people, reach, and choice.

But it’s not just Windows. The two firms are also working to remake all of the major brands at Microsoft, including Office, Bing, Xbox, Yammer, Visual Studio and more, creating a “Microsoftness” across all the brands. The idea is that users will experience that “Microsoftness” using any of the firm’s products and services, and that the old will be sharply inferior and different to the new. (Some have described the presentation as showing off the actual rebranding plans for Bing and Xbox. But Simmons repeatedly described what he showed as “sketches” that occurred before Windows 8 was completed. Any rebranding of Bing and Xbox, and other brands at Microsoft, has certainly evolved since then.)

Office. This one is hyper-specific, but Simmons essentially confirmed that Microsoft is working on Office for both Android and iOS. “It’s platform agnostic, so you don’t have to have a PC to use Office,” Simmons said, demonstrating how different the Office business is from the Windows business. “It’s mobile, it runs on Android, it runs on iOS, so it’s a little more multi-faceted [than Windows].” To the pedantic, yes, I’m taking “runs on Android and iOS” literally. But then we do know it’s happening, so why not?

A lot of tantalizing information in a scant 30 minutes or so. I wish there were more. But it’s this sort of thing that can help us retroactively understand some of the “why” behind the decisions Microsoft has made with Windows 8 and other products. And that’s an insight we so rarely get.