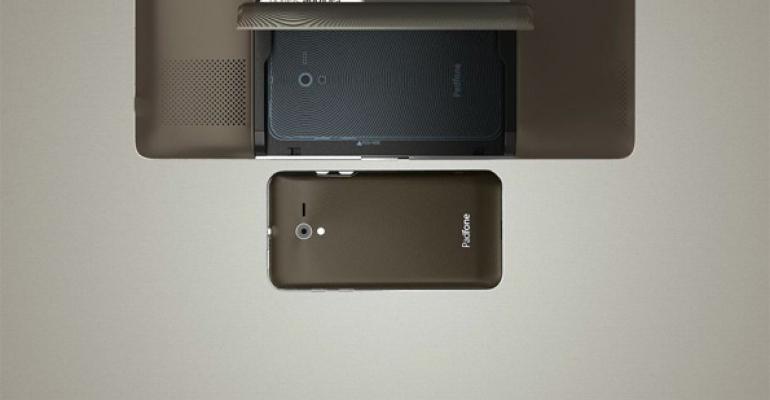 In Praise of the Windows Padfone

ASUS just dropped a bomb on the Windows community in the form of its plans to deliver something called the Padfone. There’s just one problem: Under Microsoft’s current rules, this device can’t exist. But the Windows Padfone is a great idea, and it deserves a chance in the market.

ASUS already makes a device called the Padfone, but it’s based on Android. The current version features an Android smart phone with a 4.3-inch screen that docks inside of a laptop case that ASUS calls the Padfone Station.

OK, I know what you’re thinking: This is just a slightly silly take on the hybrid PC, with the tablet replaced by a phone. But here’s where it gets crazy: The Padfone isn’t just a hybrid PC. It’s a three-in-one hybrid PC that can be used as a smart phone, a tablet, or a full-fledged laptop. That’s right: The screen is also detachable from the keyboard base.

OK, so this thing is nuts, and because of its reliance on Android it’s only of marginal usefulness in laptop form. But what if it were based on Windows? Like real Windows?

Good news, maybe: This week, ASUS corporate VP Benson Lin said that his firm was interested in making a Windows 8 version of the Padfone. According to the Wall Street Journal, he said:

“With our Padfone concept, the phone plus tablet, I think it makes sense for Windows 8. There is no target timeline … but we are interested in making Windows phones.”

Now, many have construed this statement to mean that ASUS is getting into the Windows Phone handset market. But I don’t think this can happen with Windows Phone, since Microsoft will never allow this B-team platform to edge in true Windows territory. But it’s also fair to note that Windows 8, today, doesn’t support phone calling or small, ~5-inch screens. So this ASUS device is a theory at best. In fact, I think the Lin quote was designed specifically to spur Microsoft to action.

But there’s only one way this thing gets made. And that’s with Windows 8, not Windows Phone.

And this is a good thing. Adding support for smaller screen sizes is a checkbox item on a spec sheet, and adding phone calling to Windows is as simple as porting Windows Phone’s Phone app over to Windows 8. And the notion of one device that can do it all—phone, tablet, laptop—suddenly makes a ton of sense.

Make it so, Microsoft. Please.