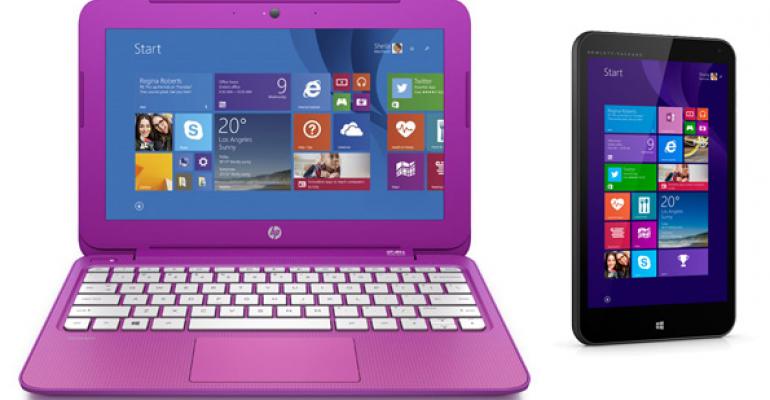 Power to the People: Low-End Tablets and PCs Reinvented the Personal Computing Market in 2014

Thanks to competition, Windows devices are better than ever

When Microsoft announced its "zero dollar" Windows licensing for phones and small PCs and tablets, I worried that we were about to enter an era in which the quality of this hardware would match that of the crapware that hardware makers always bundled on such devices. And while there are no doubt such travesties in the marketplace, I'm happy to report that my initial fears about Microsoft's strategy were unfounded. Instead, there are wonderful Windows devices to be had at every conceivable price point. And there's never been a better time to buy.

I was right about one thing: Making Windows available for free was indeed the biggest news of the year, as I wrote in Windows is Now Free for Phones and Mini-Tablets back in early April. But Microsoft, in its typically ham-handed way, revealed the pricing change as an afterthought, or aside, to a lengthy BUILD keynote by Terry Myerson, who now oversees all client OS development at the software giant. This monumental change literally got one sentence in his presentation:

"On phones and tablets with screen sizes less than 9 inches, we are making Windows available now for zero dollars," he said.

Rumors of a free Windows had been circulating for months—I had written about it two months earlier in Free Windows? Maybe—and of course the sudden introduction of numerous new Windows Phone hardware partners was suspicious at the time it was announced, though Myerson's BUILD comment belatedly made sense of it: These partners were getting Windows Phone OS for free.

There is a second aspect to Microsoft's Windows licensing strategy that doesn't get a lot of press because everyone is so focused on that "zero dollar" bit. Previous to that announcement, we learned that Microsoft had also dramatically lowered the cost of Windows to device makers on machines that cost $250 or less. This, I think, is just as important as "zero dollar" licensing, and it enables hardware makers to create nice devices with screens larger than 9 inches. Which enables nice, low-end laptops with 11- and 13-inch screens.

In Windows and the Race to the Bottom, I voiced my concerns about this strategy and argued that Microsoft should simply lower the cost of Windows on all device types. I still believe that, but when you look at both Windows and Windows Phone, it's pretty clear that whatever success these products can have in today's "mobile first, cloud first" world will be in the lower-end part of the market. Yes, the Surface Pro 3, Lenovo ThinkPad X1 Carbon and Yoga Pro 3 are all fine, fine machines, offering the same build quality as Apple's MacBook products, with some obvious advantages. But those devices don't represent the computing mainstream. They're just too expensive for most people.

One of the big non-tech stories of our day is the growing divide between the rich and the poor, and while I won't bore you with my thoughts on that one, it's not hard to draw parallels in the tech industry. Apple and its MacBooks, iMacs, iPhones and iPads represents the wealthy, visible part of the US, the excess. And at the low-end, well, we have a mess.

We have $29 Chromebooks and $49 Android tablets.

We have "zero dollar" and sub-$250 Windows tablets and laptops.

We have CVS, not Apple Stores.

And we have the hell that is Best Buy, something you rush through without making eye contact and just hope a stray wolf doesn't pull away your child while you pause at a stand full of half-broken, poorly displayed PCs and tablets.

We have, in other words, the haves and the have-nots.

But what's most heartening this holiday season, from a tech perspective, is the arrival of truly excellent low-end, Windows-based tablets and PCs. This is ... surprising. This is nice. This is most welcome.

For whatever reason, I've had the best success with HP's newest devices, and perhaps I shouldn't have been surprised to discover that the company's consumer PC efforts are being led by an old friend from Microsoft, Mike Nash. (Full disclosure: I didn't know about this until fairly recently and had already decided that the HP products I'm about to mention were top-notch and worth recommending and using. But if you think I'm somehow compromised by my relationship there, so be it. All I can say is, that has nothing to do with it.)

I'm going to quickly step through the low-end HP product line here for two reasons (neither of them named Mike). One, I'm really familiar with what the firm is doing in this space. And, two, I actually own most of these products and can and will—through formal reviews, coming soon—recommend them without reservation to readers.

HP is offering a set of devices that are pleasant to look at and use, that don't scream "cheap" and aren't embarrassing to show in public. A set of devices that starts at just $99 and tops out at just $250, which offer unique styling, capabilities, and great battery life. HP has, in its own way, reinvented what a low-end Windows-based device can be.

HP isn't without sin, of course. Just a few short years ago, I would have knee-jerk ignored this company's portable PCs, having long-ago found them to be fundamentally uninteresting and stylistically uninspired clones of Apple's MacBooks. And HP is still going down this road: The recently-announced EliteBook Folio 1020 looks exactly like a MacBook Air, which somewhat undercuts the beauty of it being fanless and silent. But that device, won't ship until next year anyway, and isn't aimed at average consumers.

Looking just at its current low-end offerings, I see crapware. HP explains these software bundles in a more positive light, of course—notes that it is being "thoughtful" about what software it places on devices with very little onboard storage—but crapware is crapware. It's a job for the customer to determine the value of each and then remove the stuff they don't want, a job that is perhaps beyond the skills of most average users. (You can offset this problem by buying the Microsoft Signature versions of these devices from a Microsoft Store, online or in person.)

At the very low-end, we see the HP Stream 7, a 7-inch Windows mini-tablet that costs just $99. In HP Stream 7 First Impressions, I noted that the Stream 7 actually undercuts the price of the horrifically bad Toshiba Encore Mini ($129) while offering a decidedly superior screen. It also offers 32 GB of internal storage, where you might expect just 16 GB for the price, and seems quite durable. Exactly the type of thing you'd be comfortable giving a child. Amazon is selling the HP Stream 7 for $125, but you can get the cleaner Signature version at that $99 price-point.

If you can $80 more, you can get the HP Stream 8, an 8-inch variant of this mini-tablet I've not tested. Aside from the bigger screen—which is also 1280 x 800—the device appears to be virtually identically to its smaller sibling, which is something you'll see repeated with the HP Stream laptops too. You can grab the HP Stream 8 from Amazon.com for $180.

Moving over to laptops, we see the HP Stream 11 and HP Stream 13. As with the tablets, these devices are basically identical aside from the screen sizes (and thus the overall form factor sizes), offering an Intel Celeron N2840 processor, 2 GB of RAM, and 32 GB of onboard storage. The screens, 11.6-inches for the Stream 11 and 13.3-inches for the Stream 13, both offer a perfectly acceptable 1366 x 768 resolution.

In HP Stream 11 First Impressions, I assume my excitement over this particular device is palpable. It's too small for me to use personally, but my wife and daughter both latched on this little laptop instantly, and the keyboard is surprisingly good (and I'm a finicky complainer about such things). You can get the horizon blue version of the HP Stream 11, which I prefer, for $200 from Amazon.com. Or get the "orchid magenta" version, or what I'd describe as pink, for the same price, assuming you can find it: This version is apparently in demand. (The Microsoft Store only has the blue version in stock too.)

Moving up to a more adult-sized laptop, we find the HP Stream 13. As I wrote in HP Stream 13 First Impressions, it's exactly what it seems like, a bigger version of the HP Stream 11. And it's only $30 more expensive, which puts it pretty close to no-brainer territory. Amazon has the horizon blue version for $240, but here again orchid magenta is (even) hard(er) to find. (Again, the Microsoft Store only stocks the blue version.)

In case it's not obvious, all of these devices are an even better deal than their up-front prices suggest. Each comes with a one-year license to Office 365 Personal, which is a $69.99 value. And each HP Stream tablet comes with a $25 electronic gift-card for Microsoft's Windows, Windows Phone and Xbox stores. Do the math, and you're really paying $70 to $95 less for each device. That's incredible.

And each of these HP Stream devices is expandable with microSD (or, in the case of the HP Stream 11 only for some reason, SD) storage. So even if you run into storage issues—and HP, like Microsoft, is really banking on you keeping your data in the OneDrive cloud—you can always expand if needed.

Critics will try to tell you that 2 GB of RAM isn't enough for Windows, but that's not true: One of the improvements in Windows 8.1 is that the OS footprint has been significantly reduced both on-disk (enabling 16 GB devices) and in-memory. And the audience that would use an HP Stream 7, 8, 11 or 13—or any similar Windows min-tablet or laptop—isn't going to be running Chrome, Photoshop and Office simultaneously anyway. Instead, these devices are quite efficient with the small mix of Modern apps and desktop applications that real people need.

If you can step above the $250 price point, some interesting options emerge as well. I haven't reviewed them or even seen them yet, but HP also offers a very interesting device type from about $380: The HP Pavilion 11 x360 is an 11.6-inch convertible laptop with touch functionality, so it's sort of the next step up from the Stream laptops. They also offer more RAM (4 GB+) and more storage (500 GB HDD) than the Stream laptops.

I've been writing about technology for over 20 years, and I've never seen anything like these devices in the sub-$500 part of the market, let alone the sub-$300 part of the market. The closest we ever got on the Windows side of the fence was the reviled netbooks, which their tiny screens and keyboards, though of course consumers have a wide range of Chromebooks from which to choose in this price range as well. On that note, I'll be reviewing the HP Stream 7, and HP Stream 11 and HP Stream 13, this month, and will be comparing the HP Stream laptops to a modern Chromebook.

But you don't need to wait for the reviews. There's never been a better time to get a great Windows mini-tablet or a great Windows laptop for next to nothing. No, these devices will never take on the high-end products that Apple offers in these categories, but then they aren't meant to. These are devices that speak to the mainstream, to those who simply can't afford to throw $1000 or more at a single laptop, or $400 or more at a single tablet. And the nice thing is, they're pretty great.