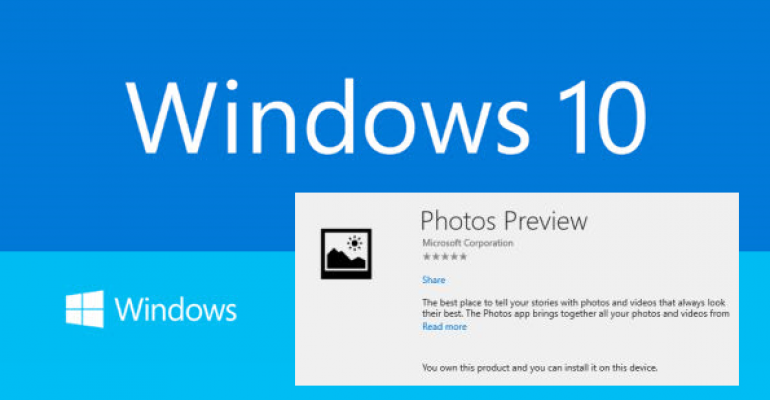 One of the universal apps that was previewed last month when Microsoft showed off the consumer features of Windows 10 was the Photos app.  It was demoed on both a phone and desktop side by side and the app has a similar experience on both platforms.  I imagine we will get the chance to try this Photos Preview out on Windows 10 on phones ourselves when the Windows Insider preview is released sometime this month as promised by Microsoft.

In the interim though you can begin to explore the app if you are running the Windows 10 Technical Preview Build 9926.

Now this app will likely replace the Photo Viewer app that came in Windows 8.1 which has always been cumbersome and limited. In fact, I have continued to use the Photo Gallery program that comes with the Windows Essentials 2012 package of programs as my primary photo management software.

However, based on the demo last month and now having some hands on time with the new universal app with this update, there might be hope for it being a real image handling and organizational tool.

Not all of the features are implemented in this latest update but they are expected to be implemented soon (see Albums and Folder View images below).

The default view when you open the app organized by month.

This is the same view as above however, the side menu has been collapsed to recover some screen real estate.

One of the methods Microsoft has implemented to gather feedback are games, tasks and quests and they are doing this on a few different platforms so it is no surprise to see a similar option in this preview app.

The settings page where you can control several options for the app. Currently it defaults to your local Pictures directory and allows you to show photos and videos from your OneDrive folders.  I would expected the ability to add other directories to be scanned at some point in the future.