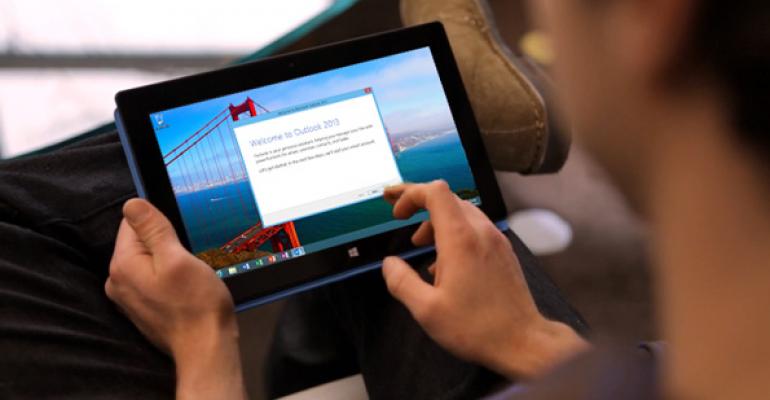 With Windows 8.1 Preview, Windows RT users get their first peek at Outlook 2013 RT

Windows RT device users who install the Windows 8.1 Preview will also get their first look at Outlook 2013 RT, which to date has been one of the major missing pieces in the RT puzzle. This release looks and works like Outlook 2013 but is missing a few enterprise features. Here’s a list of those features.

As I noted in those previous posts, Outlook RT looks and works like its x86 counterpart, which isn’t surprising. But I’m not a huge Outlook user, so some of the more nuanced differences between the Windows/x86 and Windows RT/ARM versions of the application are lost on (and uninteresting to) me. (Hey, nobody’s perfect.)

Fortunately, Microsoft has supplied a handy list of enterprise features that are not available in Outlook 2013 RT. They are…

Microsoft Lync integration. As with other desktop Office RT applications, there is no integration between Outlook 2013 RT and Lync.

As Mary Jo Foley notes in her own post, Microsoft's Outlook RT preview: Which features are (and aren't) supported, Windows RT users are still bound by the same commercial use terms as was previously the case with Office RT: “Windows RT 8 and Windows RT 8.1 Preview ship with Office Home & Student. If your organization also purchased commercial use rights or has a commercial license to Office 2013 suites that include Outlook, your users can use Outlook 2013 RT to get to business on their RT devices too.”