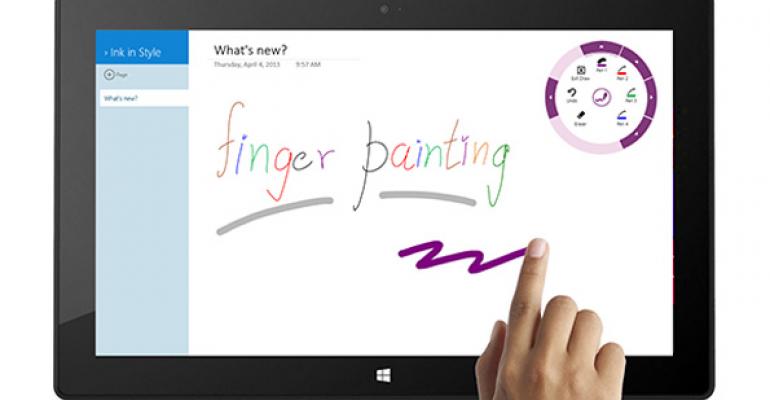 The OneNote mobile app for Windows 8 and RT has received a major update this week that should be of interest to tablet fans: It now natively supports touch in addition to a pen or stylus. This means you can use your finger to paint or draw on the screen.

Note: Be sure to check out Windows 8/RT App Pick: OneNote for more information about the OneNote mobile app.

Microsoft says that inking with a pen is still the preferred experience, and that you can of course flip back and forth between pen and finger as you wish. I’d add that there is a third option now as well: You can also use an inexpensive capacitive pen—essentially a non-electromagnetic pen that is really just a slightly more accurate replacement for your fingertip.

(OK, a fourth option too: Use your mouse with the new touch-based draw/paint interface.)

Anyway, here’s what Microsoft says about this new touch interface for the OneNote mobile app.

To access the new interface, tap the screen, open the radial menu, and select Draw.

From here you can choose pen colors, customize pen thickness, and store these combinations as a favorite pen.  Once you are done drawing, open the radial menu and select Exit Draw.