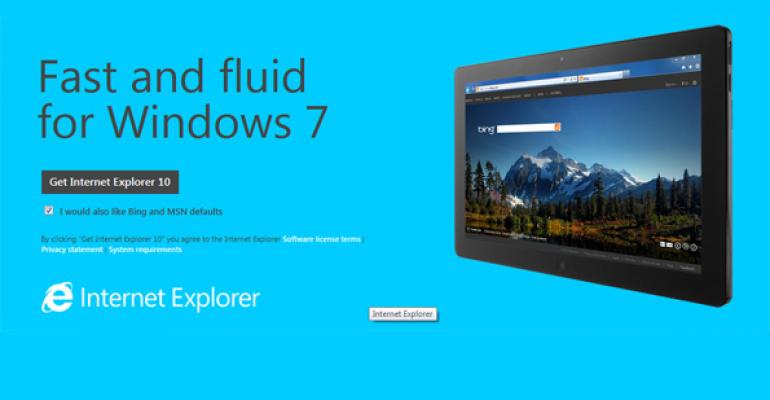 Microsoft's latest browser comes to its most popular version of Windows

Microsoft announced today that Internet Explorer 10 for Windows 7 is immediately available to download in 95 languages. The firm will begin auto-updating customers to IE 10 in the weeks ahead, with those who downloaded the release preview getting the update first.

“The biggest news on the Windows 7 front is performance,” Internet Explorer general manager Ryan Gavin told me in a recent briefing. “IE 10 for Windows 7 in the real world is 20 percent faster than IE 9. We spent a lot of time on this.”

In a blog post touting the release, Microsoft notes that IE 10 on Windows 7 “improves performance across the board with faster page loading, faster interactivity, and faster JavaScript performance, while reducing CPU usage and improving battery life on mobile PCs.” IE 10 also improves the hardware accelerated performance of various HTML constructs, and of JavaScript, where it provides faster floating point operations, faster object and property access, and more.

Additionally, IE 10 for Windows 7 brings the web standards capabilities of its Windows 8 sister to Microsoft’s most popular Windows version, with over 700 million users, providing a 60 percent increase in supported modern web standards.  These include many of the latest HTML5, CSS3, DOM, web performance, and web application specifications.

IE 10 includes other new features on Windows 7, too. An integrated spell checker with auto-correct for common spelling mistakes makes it easier to type blog posts, social networking updates, and other online posts. A new tuning for the tabs makes it easier to close many tabs more quickly with the mouse. And IE 10 ships with Do Not Track enabled, protecting users’ privacy.

Curious about how this browser differed from the Windows 8 version, I was told that Windows 7 of course lacks the Metro version of IE. But the two browsers share “essentially the same engine,” with the same rendering composition code, JavaScript engine, and so on. All the performance improvements extends from Windows 8 to Windows 7 to Windows Phone 8 as well.

And the user interface, while subtly different from that of its predecessor, is recognizable and immediately usable by IE 9 users by design. “More and more of the feedback we get tells us to focus less on bells and whistles and more on the browser capabilities and engine,” Gavin told me, explaining why the browser “chrome” has been left largely unchanged. “So we focused on speed, performance, and touch, and on the new experiences that are enabled by these capabilities.”

Gavin also subtly addressed criticism that Microsoft may be moving too slowly with IE and in effect argued that IE was leading the way. “When we added hardware acceleration to IE 9, no one had been talking about that,” he said. “Now, it’s the expectation for all browsers. The technologies we’re adding to IE 10 are like that. Take pointer events, for example: This lets developers write code that works for both touch and the mouse pointer, and it’s in IE 10, including the version for Windows 7. Developers can write once and it works everywhere, and it’s being pushed as a standard. We co-authored it with Mozilla and now other browser makers are looking at it as well.