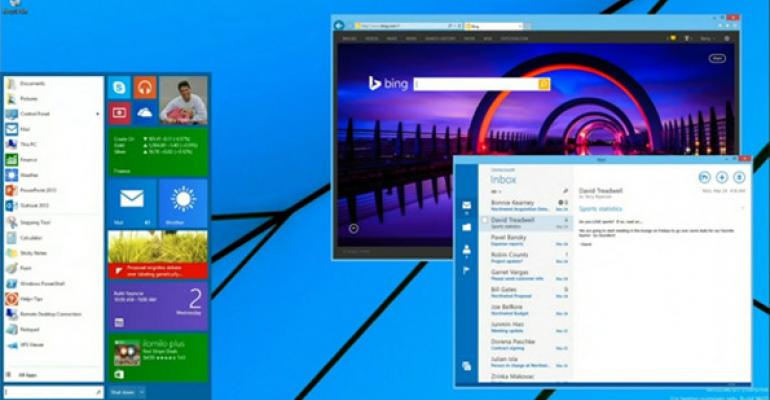 That was the original plan anyway

Mary Jo Foley is reporting that Microsoft now expects to deliver a new Start menu to Windows in the 2015 "Threshold" release, rather than in a presumed Windows 8.1 Update 2 later this year. That was of course the original schedule for the Start menu, so it appears that Microsoft's efforts to speed up the delivery of this much-requested feature have perhaps run into a roadblock of some kind.

I was the first to report on Microsoft's plans to bring back the Start menu—as an option that would make most sense on traditional PCs—in Threshold in Further Changes Coming in Windows "Threshold", back in December 2013. That report also broke the news that Microsoft would let Modern apps run in floating windows on the desktop. Threshold will likely be marketed as Windows 9.

At BUILD 2014, Microsoft confirmed these plans, and showed off mockups of how the new Start menu and floating Modern windows. But the announcement was deliberately vague when it came to timing: Talking to Terry Myerson at the show, I was told that Microsoft wasn't actually sure if it needed to wait until Threshold to deliver these features. Instead, it would work to do so as quickly as possible.

News of a possible Update 2 release, due in August, began to emerge soon thereafter. And that Start menu, at least, was expected to ship in that update.

Mary Jo says this is no longer the case, which kind of verifies the notion both of us have had recently that everything is indeed in the air. Update 2, she says, is still on track for August. But the Start menu won't be part of that release.

"I'm not clear whether the postponement is because the feature won't be fully baked in time, or if there's another reason for the change in plans," she writes, answering the biggest question this change triggers. And it's unclear what exactly will be in Update 2.

Obviously, this is big news. I'll let you know when/if I find out more.