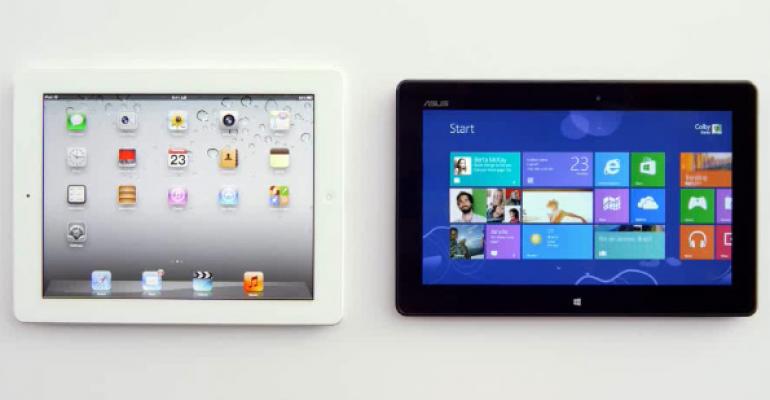 In New Ad, Microsoft Finally Takes on the iPad

Well, it only took three years, but Microsoft has finally taken on the iPad in the place that needs the most work: Public perception. A new ad, designed to mimic the sickly sweet iPad ads of late, pits Apple’s tablet against a Windows 8 tablet. And it is awesome.

Why is it awesome, you ask? (And I know the overly-sensitive Apple fans are just going to come out in force because they can’t stand anything that cuts this close to the truth.) Two reasons. One, it actually highlights actual Windows 8 advantages over the iPad. And two, it uses the overly-hyped Siri feature of the iPad to narrate the ad. Brilliant.

“Sorry, I don’t update like that,” Siri intones after a screen of live tiles animating on the Windows 8 Start screen. The iPad’s borderline useless home screen, of course, offers nothing even close to the at-a-glance info you get from tiles with live updates. (Unless you consider a number on the Mail app to be truly useful.)

“I’m sorry, I can only do one thing at a time,” Siri says when the Windows 8 tablet goes into Snap mode, offering two apps side-by-side. (Many have mistakenly complained that this suggests that the iPad can’t multitask. That’s not the point, obviously.)

“I guess PowerPoint isn’t one of those things,” she says as the Windows tablet runs a real Microsoft Office application and the iPad is stuck with Apple’s Fisher Price iWork apps. “… should we just play Chopsticks?” she asks, alluding to the iPad ads that are on TV incessantly despite the fact that, you know, these things just sell themselves