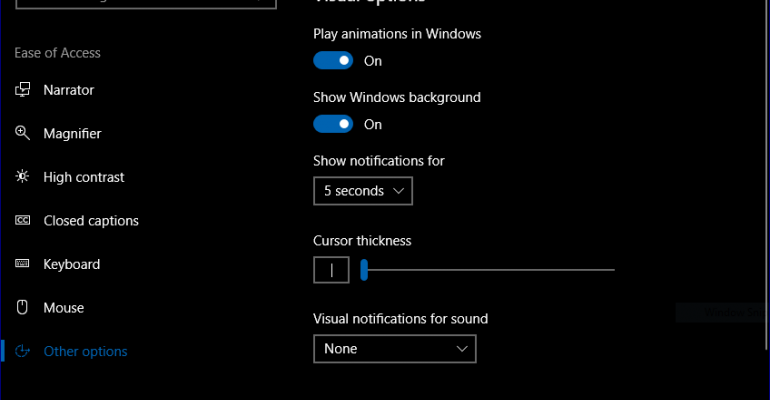 We hear from Microsoft's Accessibility Team about their plans for the next major update to Windows 10.

In both the Windows Anniversary and Creators Update, Microsoft has added many new enhancements to features across the operating system to improve accessibility for its customers who have low vision, are blind, have a partial hearing loss or deafness in either or both ears, live with physical disabilities, or need assistance reading text on their computer screen.

All of these efforts and their future focus are based on the companies guiding principles and goals to make all of their products and services more accessible.

Next up on the radar for Microsoft is the Windows 10 Fall Creators Update that was confirmed at Build 2017 in Seattle earlier this month and last week, on Global Accessibility Awareness Day, the Windows Accessibility Team laid out their feature plans for this fourth major update for Windows 10 that is expected in the September timeframe.

According to Jeff Petty, the Windows Accessibility Program Manager Lead, these new features will be across four main areas:

-- Device learning mode – Narrator will include the ability to send commands from a keyboard, touch or braille display and get feedback about what the command does without invoking the command.

-- Usability improvements – Narrator will read controls more accurately and consistently, will include Scan Mode turned on by default (and remember whether Scan Mode is turned on or off in apps across sessions), and will read apps like Settings and Weather like a web page. Narrator continues to make progress toward a unified interaction model, where Windows apps and web pages can be navigated with a consistent set of commands so that Narrator is easy to learn and use without having to remember a large set of keyboard shortcuts.

-- Braille improvements – Narrator users can type and read using different braille translations. Users can also perform braille input for application shortcuts and modifier keys, which enables users to employ their braille display to perform common tasks such as pressing ALT + TAB to switch between active applications or pressing CTRL + B to bold text.

-- Automatically generated image descriptions – Narrator will include the ability to use artificial intelligence to generate descriptions for images that lack alternative text on demand. The service includes the ability to extract text from images using optical character recognition.

-- Magnifier improvements – Magnifier on the Windows 10 Desktop will follow Narrator focus, so that Magnifier and Narrator are easier to use together for low vision users. Desktop Magnifier will include an option to provide smoother fonts and images. And, it will include new Settings and the ability to zoom in an out using a mouse wheel.

-- Learning Tools in Edge – In addition to eBooks, Read Aloud or simultaneously highlighting and voicing text, Learning Tools will be supported on web pages.

Some of these new accessibility features are already being tested in the Windows 10 Insider Program so if you are interested in testing these tools just head over to the Windows Insiders page and get signed up to participate.