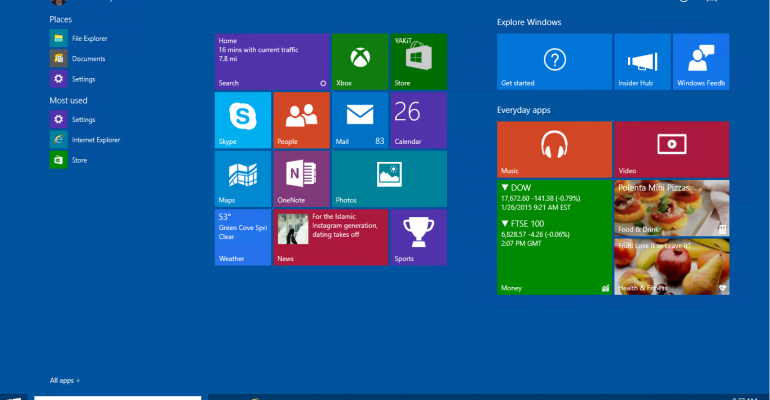 Is Microsoft taking the Windows 10 Start Screen in the wrong direction?

It is a well-known fact that Windows 8's biggest perceived/documented flaw was the Start Screen and how it was implemented.  This fact was well documented by reviewers and many users.

Even after the release of Windows 8.1, which allowed you to boot your system straight to the familiar Windows Desktop, I regularly heard from people that they hated Windows 8/8.1. Whenever I would ask why a majority of the time the response was simply I heard or read about it.

Well we have seen over the last 3-4 months that Microsoft is making a significant effort to bring back familiarity to the more than 1.5 billion users of Windows around the world by building Windows 10 in a way that merges the Start Screen of Windows 8/8.1 and the Start Menu of Windows 7.

In their initial release of the Windows 10 Technical Preview last October and the additional builds we saw before the end of 2014 the new merged Start Men/Screen on Windows 10 was well received.  It was very customizable and you could remove every pinned Live Tile from it and just have the regular vertical Start Menu or expand the size of the Live Tile area in the Start Menu by adding/resizing app tiles.

Fast forward to last week and Microsoft’s big consumer related announcement leading up to the release of their latest build of Windows 10 Technical Preview (Build 9926).

In this latest build we see not only the Start Menu/Live Tile combination that is familiar from last year’s Windows 10 Technical Preview builds.

We also finally get to put our eyes on the revised Start Screen that can go full screen and into what Microsoft has labelled Tablet Mode. This option can be invoked through Continuum, the Tablet Mode button in the new Notification Center or by simply clicking the expand button in the upper right hand corner of the Start Menu.

This new iteration of the Windows 10 Start Screen is also customizable as you can add/remove whichever Live Tiles you want however, it comes with two new additions compared to the Windows 8/8.1 version of the Start Screen.

As you can see in the above image your Windows 10 Start Screen no longer contains just your layout of Live Tiles which can be panned horizontally but also has the vertical menu of items similar to the Start Menu and the familiar desktop Taskbar.

It looks like Microsoft has not only brought back the Start Menu but they have brought it back in two sizes. One familiar to anyone who has used Windows 7 and earlier versions of Windows and then a full screen version of the Start Menu.

Windows 8/8.1 may have been perceived as having crossed too far into the touch based world but the one area I think they got right in touch was the Start Screen. The Live Tiles made great tap targets however, keeping the vertical menu list and the taskbar on the full Start Screen is contrary to those advances made in Windows 8/8.1.

I understand the desire to re-assure desktop customers on both the consumer and business side of the road that they are bringing back familiarity but I hope they do not go too far in the other direction and erase the gains and innovations that Windows 8 did bring to the OS.

Luckily this is a technical preview and not its final version so maybe this is a test to try out the waters for this new iteration of the Start Screen.

What do you think of this and other changes in Build 9926 of the Windows 10 Technical Preview?