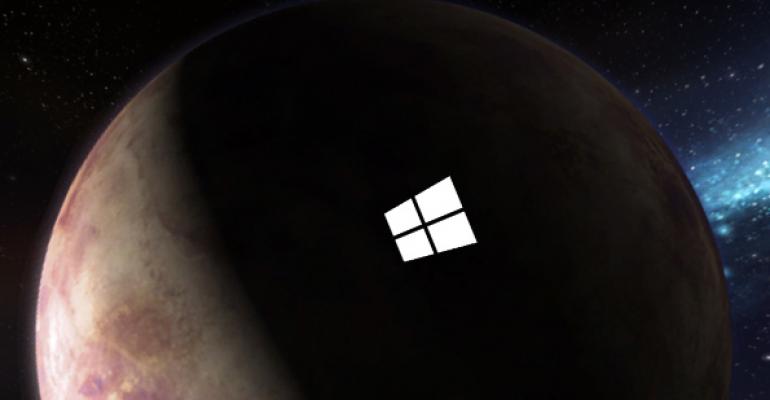 Microsoft to Take Windows to the "Threshold"

What comes after Blue? This

What's not clear is whether the Threshold releases will be staggered as were the Blue releases. Microsoft delivered Windows 8.1 and Windows Server 2012 R2, both parts of the Blue wave of releases, in October 2013. But Windows Phone 8.1 was always planned for a longer, 18 month schedule, and wasn't/isn't expected to hit until the first half of 2014. (A set of Office 2013 updates, codenamed Gemini, might also be considered part of the Blue wave.)

According to Ms. Foley, Threshold is a set of post-Blue updates for Windows, Windows Phone and Xbox One. The name comes from the Halo series of video games: It was the planet around which the first Halo ring was orbiting. So that's fun and everything, but I think the name has a deeper meaning.

As you may know, Microsoft is working to consolidate its Windows-based OSes, and as I wrote previously in A New Hint About Microsoft's One Windows Vision, the firm will likely combine Windows Phone and Windows RT into a single platform. One of the big questions, however, is when that will happen.

Threshold will happen after Windows Phone 8.1 and before this (expected) consolidated Windows RT/Phone. So it is the release that will put Microsoft on the threshold, if you will, of a truly consolidated OS.

According to Foley, Threshold isn't a single release for all three OSes, which will remain separate. Instead, like Blue, it is a release wave, three separate releases that will likely be timed to occur simultaneously or nearly so. More important, this set of Threshold releases is designed to bring Windows, Windows Phone and Xbox One closer together, functionally. It is a way to provide that single experience that Microsoft today promises across its platforms.

Foley says that Microsoft wants to support the same "high value activities" across the platforms, which she explains are "expression/documents, decision making/task completion, IT management and "serious fun." It's not clear how most of that would apply to the Xbox One, unless of course Microsoft has deeper plans for the PC-like console (that shh! Don't tell anyone; it runs Windows 8).

Before Threshold, Microsoft also plans to ship another update to Windows 8 (Windows 8.2?) that will arrive at roughly the same time as Windows Phone 8.1. They really need to start aligning these releases better.

With Users Feeling Blue, Microsoft Seeks a Windows 8 Mulligan
May 30, 2013

A New Hint About Microsoft's One Windows Vision
Nov 26, 2013