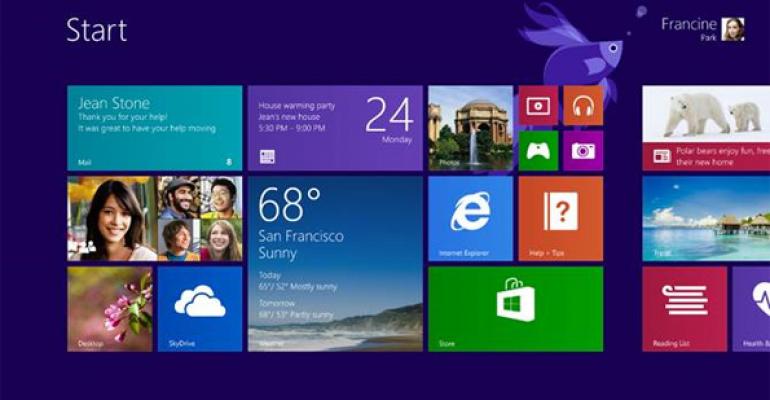 Readers of this site know why I put quotes on that

Microsoft today provided what it calls a “first look” at the changes coming in Windows 8.1, the free service pack/feature pack-style update it plans to deliver later in the year. This includes improvements in key areas like personalization, search, the built-in apps, Windows Store experience, and cloud connectivity.

“It’s Windows 8 even better,” Microsoft corporate vice president Antoine Leblond wrote in a post to the official Blogging Windows blog. “Not only will Windows 8.1 respond to customer feedback, but it will add new features and functionality that advance the touch experience and mobile computing’s potential.”

Here are some of the new features Leblond describes. As you may know, if you’re reading this site, many of these features were previously revealed here in the past months.

The Windows 8.1 update includes important improvements to the personalization capabilities of Windows 8. These include:

Start screen. Windows 8.1 offers more colors and backgrounds for the Start screen, including new motion themes that hadn’t leaked previously. As you discovered yesterday, you can now choose your desktop background as your Start screen background too. The Windows 8.1 Start screen now includes two new tile sizes so you can organize it exactly the way you want it; It’s also easier to name groups and rearrange tiles. You can now select multiple apps all at once, resize them, uninstall them, or rearrange them.

All Apps. As previously revealed, the All Apps screen is now a swipe away from the Start screen, and it can now be filtered by name, date installed, most used, or category. New Windows Store app installs no longer add a tile to the Start screen: Instead, you can find new apps in All Apps, where they are marked as new. You can choose to pin the apps you want to your Start screen.

Picture Frame. A new mode for the lock screen that turns your PC/device’s screen into an animated slide show of your photos, whether they’re stored locally or in SkyDrive.

Skype integration. You can now accept a Skype call or take pictures with the built-in camera right from the Lock screen without having to log in, Microsoft says.

Big changes here: In Windows 8.1, the Search charm will provide global search results powered by Bing in “a rich, simple-to-read, aggregated view of many content sources (the web, apps, files, SkyDrive, actions you can take)” that seeks to “answer” your query. “We think this will really change the way you interact with the web and with Windows, making it quicker and easier to get things done,” Leblond claims. “It is the modern version of the command line!”

Built-in apps. Microsoft is finally going to update more of the “core” Windows Store apps that ship as part of Windows 8. (Many but not all were updated this spring, as you may recall.) The Photos app will pick up some new editing features that lets you quickly edit photos directly from the app or when you open them from other apps, including Mail, SkyDrive, and Camera. The Xbox Music app has been “completely redesigned”—you may recall the promised June/July update to the Xbox Music service—to make it easier to find and play music from your collection. Leblond also promises more details about coming built-in app updates in a future blog post.

Snap. As we revealed previously, the terrible Snap feature from Windows 8 is being significantly updated and could now be useful. “Windows 8.1 brings variable, continuous size of snap views,” Leblond writes. “You will have more ways to see multiple apps on the screen at the same time. You can resize apps to any size you want, share the screen between two apps, or have up to three apps on each screen if you have a multiple displays connected. You can have different Windows Store apps running on all the displays at the same time and the Start Screen can stay open on one monitor. This makes multi-tasking even easier. Also in Windows 8.1, you can have multiple windows of the same app snapped together – such as two Internet Explorer windows.” Let that sink in, folks. Those are some major changes.

Store. Finally, Microsoft is updating the Windows Store, which is borderline useless for finding new apps. “The improved Windows Store in Windows 8.1 is designed to show more info than before with detailed lists of top free apps, new releases, and picks for you on the homepage,” Leblond explains. “The app listing is more descriptive and informative and includes an area for related apps to help with app discovery. Categories are listed with other app commands such as links to your apps and your account information. App updates install automatically in the background as well as they come through the Store. And Search is available in the upper right hand corner for finding the apps you want.”

As we revealed previously, SkyDrive is being integrated directly into Windows 8.1. This will have a particularly nice effect in Windows RT, as users of that OS can’t download and install the SkyDrive desktop application. The new version of the SkyDrive app lets you access all the files that are on your PC/device or in the cloud, and the files are accessible even when you’re offline.

As you’ve seen in previous leaks, PC Settings has been updated dramatically in Windows 8.1 with far more settings that were previously available only from the desktop-based Control Panel. “You can do things like change your display resolution, set power options, see the make and model of my PC, change the product key, do Windows Update, and even join a domain – all from PC Settings,” Leblond explains. “You can even manage SkyDrive from PC Settings as well and see how much available storage you have (and buy more if needed).”

As we revealed previously, Windows 8.1 will include Internet Explorer 11. This new version of IE will offer better touch performance, faster page load times and several other new features, including the ability to adjust the appearance of the Metro version of IE 11 so that it will always show the Address Bar and you display as many open tabs as you like. Open tabs will also sync across all of your Windows 8.1 devices.

Responding to complaints that the Windows 8 “touch first” UI was also antagonistic to traditional PC users with mice and keyboards, Microsoft has made several changes aimed at silencing the critics. These include:

Start button. They refuse to call it a Start button for some reason, but in Leblond’s words, Microsoft has changed the Start Tip to be the familiar Windows logo. It is onscreen all the time while you’re in the desktop environment and will appear as before when you’re using a Metro app. Here's how it looks in Switcher:

Hot corner configuration. Today, the corners of the screen in Windows 8 are hard-coded hot corners, but with Windows 8.1, Microsoft is letting you configure what they do. “There are options to boot into alternate screens,” Leblond notes. “For example, if you prefer to see the All Apps view versus all the tiles, you can choose to have the Start screen go directly to All Apps view.”

Leblond says that this first (official) peek at Windows 8.1 doesn’t represent all of the changes coming in this update. More will be revealed soon in a series of blog posts about the release and at shows like TechEd (next week) and Build (end of June).

“Windows 8 has been a bold, necessary move towards mobility for the PC industry – pushing ourselves and the rest of our industry ahead with a touch-first approach that is redefining the PC as we know it, while offering the best of all worlds across any device at any time,” he concludes. “Our commitment to that vision – and to always improving - remains the same as we stay the course of the evolution of Windows with Windows 8.1.  We’ve been watching, we’ve been listening; Windows 8.1 will continue to build on what you love bringing the latest advancements in hardware, apps, cloud services and the OS to enable a unique experience in everything you do.”