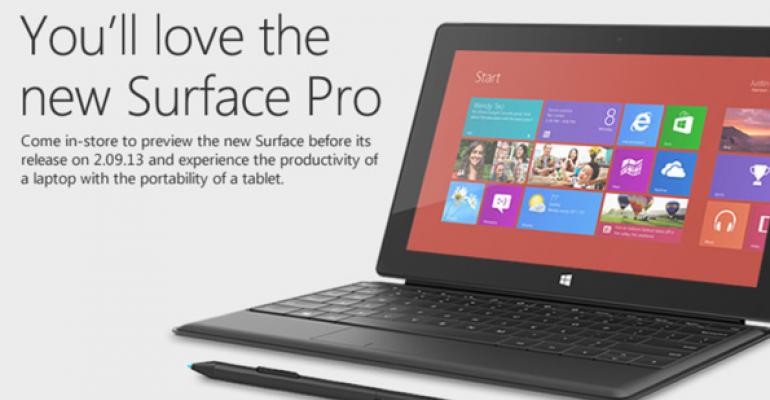 When I wrote on Sunday morning that you may be able to get your own hands-on experience with Microsoft’s Surface with Windows 8 Pro by visiting a Best Buy, Staples, or other retailers, I didn’t realize how readily available the devices would be. But with Microsoft now inviting potential customers to their stores to check out Surface Pro days ahead of the official launch, it’s getting much clearer: They're all over the place.

Sunday, I was the first to reveal that Surface Pro would be available at select retailers this week in Test Drive Surface Pro Today!. But the way this was communicated to me suggested that Microsoft was beholden to the schedules of its retailer partners, and that Sunday was just some day that they used to build out product showcases in-store. So I sort of assumed that most Microsoft Stores wouldn’t have these devices out until February 9, the day Surface Pro formally launches.

Based on the feedback here, on Twitter, and via email, that’s not the case. And today, I received an email from Microsoft to its customers, inviting them to come to their local Microsoft Store to check out Surface Pro.

“Preview Surface Pro at your local store,” the email reads. “You’ll love the new Surface Pro. Come in-store to preview the new Surface before its release on February 9, 2013 and experience the productivity of a laptop with the portability of a tablet.”

My exhaustive review of Microsoft Surface with Windows 8 Pro will be available tomorrow night, February 5, starting at 9pm ET/6pm PT, along with a full unboxing gallery and the first article in a new series called “Going Pro.” Stay tuned!