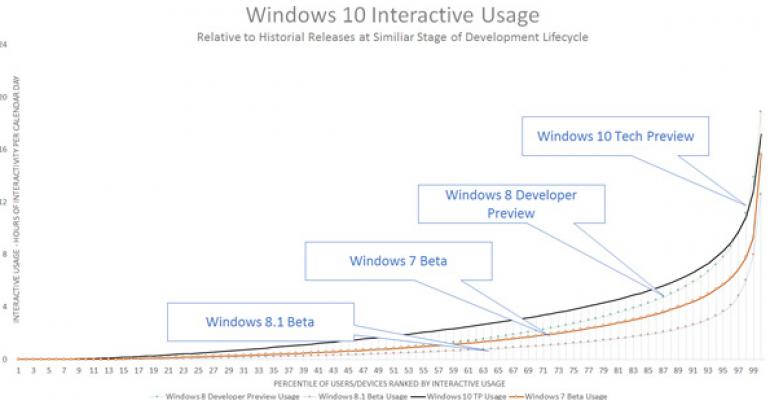 You can't handle the truth

When Microsoft suddenly revealed a month ago that build 9879 would be the final pre-release build it would deliver in 2014, tech enthusiasts who were testing Windows 10 were understandably disappointed. But the firm today explained why it halted the releases when it did.

You may recall that Microsoft issued the third pre-release Windows 10 build, 9879, on November 12. On that day, it also noted that build 9879 would be the last build released this calendar year, though of course two builds—9888 and 9901—have since leaked as well.

Today, Microsoft's Gabe Aul offered up the first explanation for this sudden drop off in production: It's because the firm is putting together a consumer preview build for January that includes "a bunch of new features and improvements," and the Windows team needed to "stabilize code, fix any integration issues, and ensure all of the new UX is polished."

"We're really focused on making the next build something that we hope you'll think is awesome," Aul writes. "In fact, just so that we have a daily reminder to ourselves that we want this build to be great, we even named our build branch FBL_AWESOME. Yeah, it's a bit corny, but trust me that every dev that checks in their code and sees that branch name gets an immediate reminder of our goal. We're super excited to show you what we’ve been up to!"

We're super-excited to see it, believe me. :)

In addition to this not-unexpected news, Aul also revealed a few details about the Windows Insider Program, the unfortunately-named beta test program for Windows 10.

Over 1.5 million people testing Windows 10. There are over 1.5 million registered Windows Insiders today, and about 450,000 are what Microsoft considers "highly active." (I assume people who are running build 9901 are considered "borderline nuts.")

Feedback is leading to bug fixes. Aul says that Microsoft has almost 1,300 bugs that have been reported (or upvoted) by Insiders so far.

Feedback will lead to more feature changes too. Testers have been disappointed that we haven't seen more feedback-related changes to Windows 10 features, but that's coming too. "I'm confident that the next build we release will be an exciting one and will show how Windows 10 is evolving with your input," Aul writes. "Please keep using Build 9879 and sending us feedback!"