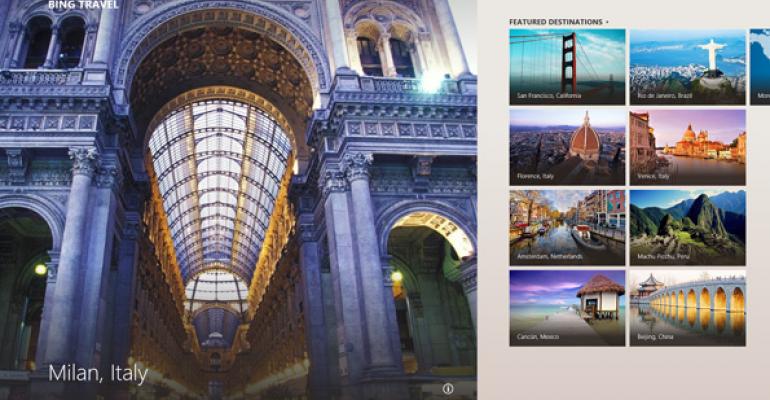 While there’s been a lot of debate over the quality of some of the Metro-style apps that are bundled with Windows 8, the Bing apps—Bing, News, Finance, Sports, Travel, and Maps—are widely regarded as being among the few that are quite excellent. This week, Microsoft talked up the creation of these apps, describing to developers some of the ways in which they can build their own content-rich Windows 8 apps.

These apps are so good, in fact, I actually asked Microsoft months ago whether they would be making a template available to developers so that they could make their own apps with the same look and feel. The answer to that question, alas, was a confused no. But this is the next best thing.

“This technical overview provides insight on the architecture of these apps, key Windows 8 features and the contracts they use, common controls they employ, and world readiness more generally,” Microsoft’s Jigar Thakkar writes in a post titled Building the Bing apps for Windows 8. If you’re developing apps for Windows 8, you need to read this post.

There is a ton of information in this post, and while I could waste your time reiterating it all, let me just provide a few highlights. Again, be sure to check out the original post for a ton of useful information and guidance.

Language/platform. The Bing apps are all written in client-side HTML 5/JavaScript/CSS, except for Maps, which is written with XAML/C#. So that should put to rest the notion that you can’t write serious apps with web technologies.

Common custom controls. The Bing team built several custom controls on top of the UI controls provided natively by the Windows SDK, and used them across each app for a consistent look and feel and experience. For example, instead of using a regular app bar, the Bing apps have a consistent, feature-rich navigational app bar experience (at the top) that also differentiates them from other apps.

Take advantage of key Windows 8 features. Each of the Bing apps provides a rich snap mode experience so they can be used side-by-side with other apps. They also provide live information to the app tiles, use the standard Settings charm for providing app settings, and are globalized for a better local experience.

Take advantage of Windows 8 contracts. The Bing apps use Windows 8 integration technology such as the Share contract, letting users share information they see with others via other Windows 8 apps like Mail and People. Each of the apps supports the Print contract, so they can print to any Windows-compatible printer, and the Search contract, so you can find the information you’re looking for.

Ads. As I noted in Microsoft Cheapens Windows 8 with Ads the Bing apps (like the Xbox apps) include ads. Bing says that these ads are implemented as a custom control, using the Microsoft Advertising SDK, and while they’re currently pretty unobtrusive, I’m obviously worried about the future here.

Performance. Between the RTM release of Windows 8 and general availability (GA) in late October, the Bing team improved the performance of these apps dramatically. The post describes some of the ways in which they did this, which looks like good advice for anyone building content-rich apps for Windows 8.

Overall, the Bing apps are a shining example of what’s possible with Windows 8, and a nice differentiator for the platform when compared to Android or iOS, of which only the latter has any apps reaching this level of design sense and content richness. If you’re looking to differentiate your own apps on Windows 8 with those build for other platforms, there are some great lessons here.