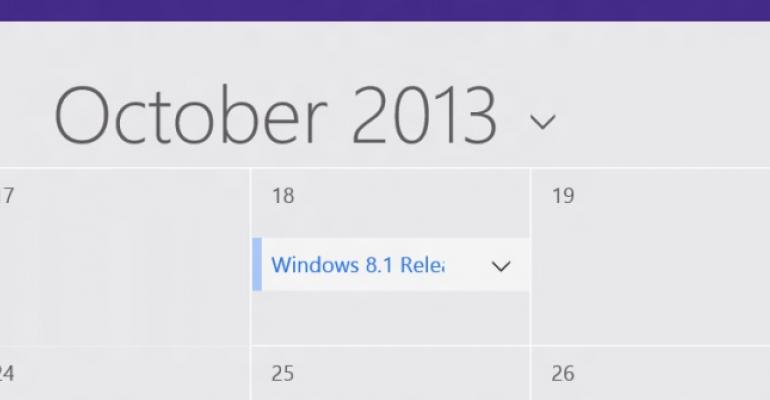 Microsoft revealed today that it will wait two months between the time it completes Windows 8.1 and releases it to the public. The announcement confirms a previous report by Mary Jo Foley, who revealed the October release date earlier this week.

You can find out more about my theory for this strange two month delta in Possible Schedule Emerges for Windows 8.1 Release. But let’s see what Microsoft has to say about this.

“Starting at 12:00 am on October 18 in New Zealand (that’s 4:00 am October 17 in Redmond), Windows 8.1 will begin rolling out worldwide as a free update for consumers on Windows 8 through the Windows Store,” a new post to the Blogging Windows blog notes. “Windows 8.1 will also be available at retail and on new devices starting on October 18 by market. So mark your calendars!”

The post doesn’t mention Windows RT explicitly, but since Windows RT is just a version of Windows 8, we can probably assume those users will get the upgrade on the 18th as well. The post also doesn’t mention MSDN or TechNet, which is sure to cause some grumbling.

Separately, Microsoft announced that its R2 wave of server products will be shipping on October 18 as well. This includes Windows Server 2012, System Center 2012 R2 and the next iteration of Windows Intune. (Another R2 product, SQL Server 2014, will ship in the first half of next year.)