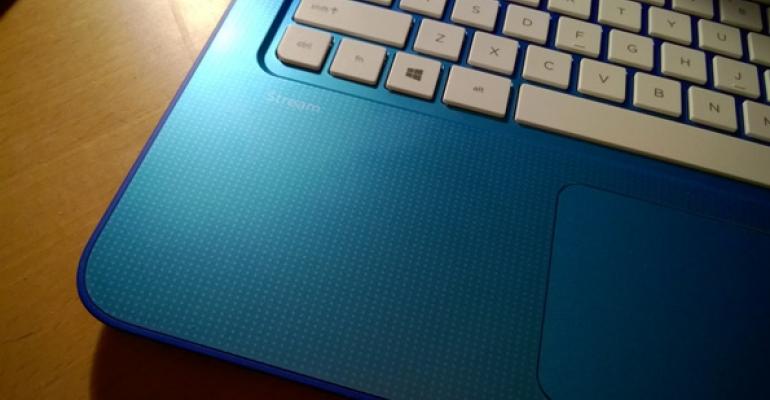 For all the ways you could spend—and waste—money on technology this year, the best value to be had was a pair of affordable and value-packed laptops, the HP Stream 11 and HP Stream 13. Announced by Microsoft in July and greeted by stunned disbelief, these HP Stream laptops deliver on the promise that a Windows device can be affordable without being cheap. They aren't just good enough. They're great.

Admittedly, this year's selection was a bit more contentious than last year, when the Nokia Lumia 520 ran away with the crown. But that's good news: Unlike in 2013, we now have a tremendous range of high-quality, low-cost Windows devices from which to choose. So the HP Stream laptops are winners in a much more competitive market.

And check this out: The runner-up to this selection was another HP device, the HP Stream 7, which is currently $125 at Amazon.com. And the only reason I didn't just make this a general HP Stream pick—including both tablets and laptops—is not HP's fault: It's just that the ecosystem for mobile apps in Windows 8.x is still struggling. Put simply, a Windows laptop is a better buy right now than a Windows tablet.

It's also a better buy than any Chromebook. I've come to understand the popularity of these devices, but they're still far too limited when compared to Windows laptops; heck, even Chrome itself is more full-featured on Windows than it is on a Chromebook. But with the HP Stream 11 and 13, we see Windows laptops that aren't just better than Chromebooks, but also cheaper than comparable Chromebooks. So picking one over a Chromebook is a no-brainer for most people.

HP Stream has proven so popular with my family that we now have three of them. My wife uses an HP Stream 11 at her standing desk and has declared it a far superior PC to the Microsoft Surface 2 she was previously using, mostly because the performance is so much better. My daughter has switched from an older, hand-me-down Macbook Air 11 (relax, it was running Windows 7) to another HP Stream 11. And I've been using an HP Stream 13 around the house for review purposes.

I personally prefer the Stream 13's bigger screen, and while I don't think buyers in this price segment are super-concerned about the specifics of port availability, I will point out that the Stream 13 has three USB ports to the Stream 11's two. Likewise, the Stream 13 has a microSD port, which I prefer to the Stream 11's (non-micro) SD port. Why? Because a full-sized SD card still sticks out more from the port when inserted, and could be inadvertently ejected more easily. But whatever. Both laptops offer the right level of expansion for this market, and I'd point out that either one of these Streams has more USB expandability than any Surface device, including the expensive Surface Pro 3. Shame, Microsoft, shame.

The HP Stream 11 and 13 are not powerhouses, but then they're not meant to be. More important, I think, they are also not netbooks. They offer high-quality HD screens, full-sized keyboards that I find quite comfortable—and you know how picky I am about those two components—and a gorgeous gradient paint job that has no business being on a device in this price class. Unlike a netbook, you don't have to be embarrassed to use an HP Stream, and indeed, the beauty of these devices will draw accolades from others. They're just really nice looking laptops.

They're also real PCs. No, an Atom processor and 2 GB of RAM won't give you a great experience multitasking between Photoshop, multiple Office applications, and a web browser. But you can run all of those applications if you want, and that's the point. Apple iTunes is available, as are all other PC applications, including desktop apps, Modern (Metro) apps and of course web apps (including, cough, Chrome web apps, some of which—seriously—don't even run on Chromebooks). This is the sweet spot for app compatibility.

HP Stream isn't perfect, of course. Power users will need more horsepower, and the RAM is not upgradeable. A fairly low 32 GB of eMMC internal storage means you'll be turning to microSD/SD expansion at some point. And of course you don't get touch at these prices: You will need to step up to the HP Pavilion X2 10.1-inch Detachable 2 in 1 Laptop, which starts at $270 at Amazon.com for that capability. And maybe that's something you should consider, though I haven't tested that particular device.

But wait, there's more. Both come in a choice of very vibrant colors, including the Horizon Blue I prefer and Orchid Magenta, which is currently hard to find. Both come with a one-year subscription to Office 365 Personal, which as you may know is a $69.99 value. Both include a $25 virtual gift card to the Windows Store, so you can stock up on paid apps, music, or TV shows and movies, your choice. That's $95 in freebies that you will use. You're paying just $105 to $135 for the hardware.

And someone told you Chromebook was a good deal. Pfft.

My advice here is to grab one of these Stream laptops at the Microsoft Store if possible, so you can get what's called a Signature Edition version of the device that comes sans crapware. You'll also save some money, though given the vagaries of Amazon.com pricing that could change over time. Get one for a child, or get one for yourself. But do get one if you have the need.

The HP Stream 11 and 13 pass a very important and rare test for me: These are devices I can recommend wholeheartedly without any reservations, and I don't get to do that a lot. These laptops are the real deal. Welcome back, HP.