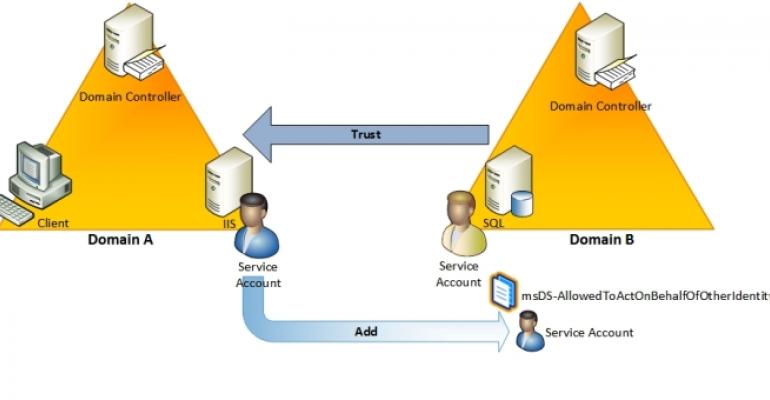 What Is Constrained Delegation?

Kerberos constrained delegation has been a part of the OS since Windows Server 2003. It requires you to configure an allow list of service principal names (SPNs) on user or computer objects in Active Directory (AD). You add the list of SPNs that represent the back-end services to which a front-end service is allowed to request tickets on behalf of the user to the ms-DS-Allowed-To-Delegate-To attribute of the principal under which the application or service on the front-end server runs. In the previous example, the front-end service is IIS and the back-end service is SQL Server. To constrain the delegation for IIS, you would add SPNs for the SQL Server instances running on the SQL Server system to the ms-DS-Allowed-To-Delegate-To attribute on the IIS computer account in AD—or the user account running the IIS application pool. This model constrains the front-end service to only request service tickets that are listed in the ms-DS-Allowed-To-Delegate-To attribute. The downside of this delegation model is that it relies heavily on SPNs.

SPNs are difficult to manage. Although they’re simple in concept, SPNs can cause a significant amount of frustration, stemming from unique constraints associated with using them.

Constrained delegation appears to contradict the basic rule of registering a duplicate SPN; however, this is only in appearance. The KDC doesn’t look at the ms-DS-Allowed-To-Delegate-To attribute when trying to map an SPN to a security principal. Therefore, the unique SPN requirement is limited only to values in the servicePrincipalName attribute. To constrain the delegation of a service or application, you must list the service's SPNs on the security principal that runs the application on the front-end server.

Managing the number of SPNs, knowing when and where to register them, and avoiding duplicates is cumbersome. This makes constrained delegation difficult to implement, maintain, and troubleshoot.

Constrained delegation in Server 2012 introduces the concept of controlling delegation of service tickets using a security descriptor rather than an allow list of SPNs. This change simplifies delegation by enabling the resource to determine which security principals are allowed to request tickets on behalf of another user.

The new implementation of Kerberos constrained delegation has the following requirements:

Server 2012 KDCs are required for this feature because these are the only KDCs that know how to return referred S4U2Proxy requests and use the new msDS-AllowedToActOnBehalfOfOtherIdentity attribute on the service account. The front-end server requires Server 2012 because the version of Kerberos on these servers understands that it must chase S4U2Proxy referrals to trusted domains and forests.

You manage Server 2012 Kerberos constrained delegation using Windows PowerShell. Use the following Windows PowerShell cmdlets to manage constrained delegation. Typically, you'll want to use the Get-ADUser, Get-ADComputer, or Get-ADServiceAccount of the principal running the front-end service and pass that principal object as the argument value to the -PrincipalsAllowedToDelegateToAccount argument.