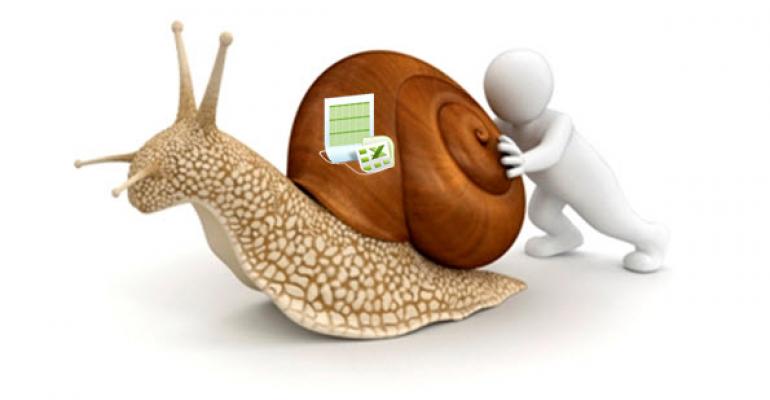 How To: Fix the Excel File Slow-to-Open Bug in Windows 10

This is one of the issues that has plagued me since upgrading my systems to Windows 10, but due to a busy travel schedule and other miscellaneous work items, I just delayed digging in to figure out a solution. Last night I had had enough and spent a good hour developing a solution.

The solution is a simple one, but makes absolutely no sense. I chalk it up to an errant bug Microsoft missed.

Running either Office 2013 or the latest Office 2016, when opening an Excel file from the file system, it takes close to 20 seconds for the file to open completely. It doesn’t matter if the file is sitting in the Cloud, on a network share, or even locally – it just takes forever to load, even if the file contains no data. To make matters more confusing, if you open Excel first (which opens quickly on its own) and then open the file, the file opens blazingly fast. So, it would seem that it’s an Excel issue, right?

To further confound the wise, the issue doesn’t exist for everyone. And, that seems to eliminate an Excel issue and put the blame squarely on Windows 10, or at least a component of Windows 10. Why would the experience differ between Windows 10 users?

I finally figured out why…

I’ve yet to figure out why this is, but if you turn on the “Hey, Cortana” voice command feature after installing or upgrading to Windows 10, it bogs down Excel file execution. This issue only exists for Excel and none of the other Office applications. Word, PowerPoint, etc., work just fine.

Those that never turned on “Hey, Cortana” (which is an awesome feature, btw) have never experienced this problem, hence why the issue exists for some and not others.

To fix the issue and speed up the opening of Excel files, you have to turn off the “Hey, Cortana” feature.

I’m sure Microsoft will fix this bug eventually, but at least there’s a remedy – even if you have to turn off a valuable and highly touted feature of Windows 10.