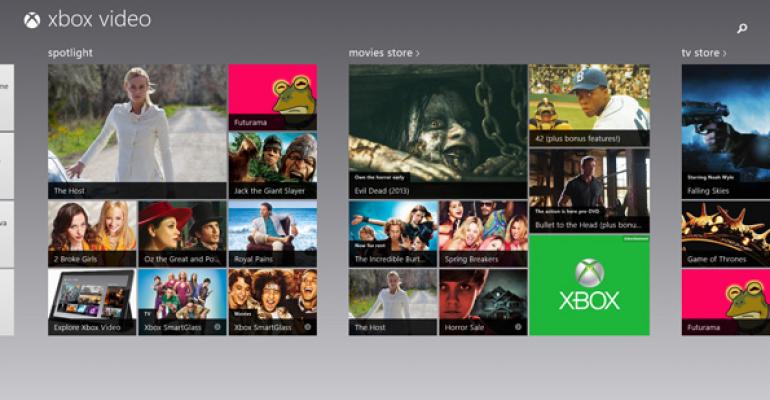 Nothing major here, at least not in the Windows 8.1 Preview

Knowing in advance that the Xbox Music app was getting a major redesign in Windows 8.1, I was curious to see whether the other Xbox entertainment apps that ship with Windows 8 and RT were getting a similar overhaul. But no such luck: The version of the Xbox Video app that ships in the Windows 8.1 Preview is only minimally changed from the current shipping version. Fortunately, more changes are coming.

At first blush, absolutely nothing has changed. The primary UIs in the app are identical to that of the current version.

But dig a bit deeper and there are a handful of minor changes. These include:

While you can still use the Search charm to search content in Xbox Video, the in-app search button works differently in the Windows 8.1 Preview than it does in the current version. When you tap this button—or just start typing—to search, a new in-line search box appears.

This inline search feature provides as-you-type suggestions, as you might expect from a Microsoft product.

Search results look and work before (and include “related” content without really calling it out that way obviously).

Xbox Video can now download purchased and rented videos in the background more efficiently while you do other things.

Xbox Video supports the new Snap sizes and portrait mode that are debuting with Windows 8.1 so you can watch videos while running other apps side-by-side, even in portrait mode.

Like other Metro-style apps, Xbox Video now works natively with content stored on an SD or micro-SD card. I just wrote about one way to configure this capability in Windows 8.1 Tip: Use Micro-SD with Libraries and Metro-Style Apps, but you can also configure this in PC Settings.

In short, nothing major. But Microsoft says that “the full launch of Windows 8.1” later this year will include “even more updates” for Xbox Video, and of course I was told that a “big overhaul” of all of Microsoft’s Xbox entertainment apps was due this summer. So we know more is coming, and it’s reasonable to expect at least an app redesign along the lines of the new Xbox Music.

More concerning, however, are the terrible terms of Xbox Video purchases and rentals. You really need to be careful reading the fine print with these downloads. For example, many video purchases actually time out, meaning you can’t even download or stream them after a certain date, which is inexcusable. And rentals are particularly weak: You must watch a rented film within two weeks and then finish watching it within 24 hours. Amazon’s terms are twice as long: 30 days and 48 hours. If Microsoft is serious about competing in this market it needs to step it up.