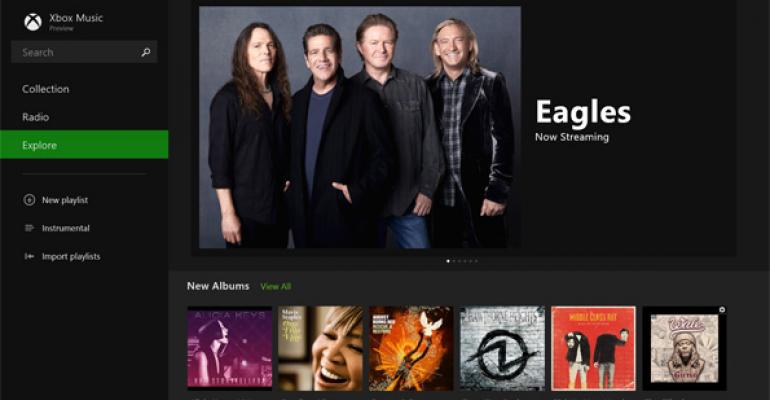 More of a spit-shine than the promised massive overhaul

Anyone who believed that Microsoft was prepping a major update to the Xbox Music app as part of the Windows 8.1 update for Windows 8 and RT is going to be disappointed with the result. Rather than a complete do-ever as was obviously required, the new app offers simpler navigation but no major new features at all.

No worries, I was among the fooled. Back in March, I was told point blank that “everyone” [at Microsoft] knew how horrible the Xbox Music (and Video) experience was on Windows 8, and that there were “500 people” working on it. A “big overhaul” was expected in June/July, I was told.

This isn’t it. This is what we call “lipstick on a pig” in the business.

Don’t get me wrong. The new version of the Xbox Music app is at least attractive. And it dispenses with the navigationally horrible UI of the previous version which, like other Xbox entertainment apps, was a massive horizontally scrolling panoramic experience in which your own collection was shunted off to a separate interface.

Now, in the new version of the app, the scrolling and separate collection UI are gone, replaced by a nice, single screen experience that looks and works an awful lot like any other jukebox app, including iTunes or Amazon Cloud Player.

Indeed, the new Xbox Music is simplicity itself, with just three main navigational items: Collection (your music collection, which can be sorted by albums, artists, or songs), Radio (formerly called Smart DJ, a way to play radio-like dynamic playlists that are based on a favorite artist), and Explore, which launches you into the Xbox Music Store.

Curiously, your playlists—which are still static, no Smart Playlist feature has been added—are available from the left navigation bar no matter what you’re doing, including browsing the store. Why? No idea.

So the surface presentation is new. But after the initial excitement, I began to realize that this was in fact exactly the same app, just with a new front-end. Select an artist, for example, and a very similar (read: identical) pop-up window appears, with all the same options from before.

Explore an artist and it gets even worse: The UI switches to a gigantic, horizontally scrolling mess that was taken right from the original app version, with the same old color scheme. Sigh.

Looking for new features? There’s not much. As with many of the updated experiences in Windows 8.1, the new Xbox Music app features a prominent Search box so you can find something without having to master the hidden Charms feature in Windows 8/RT. But the search results—wait for it—are taken right from the original version of the app.

Disappointing? You bet. And all I can hope for now is that this isn’t Microsoft’s final vision for this app and that things will get better before the final release. To be clear, things can only get better.