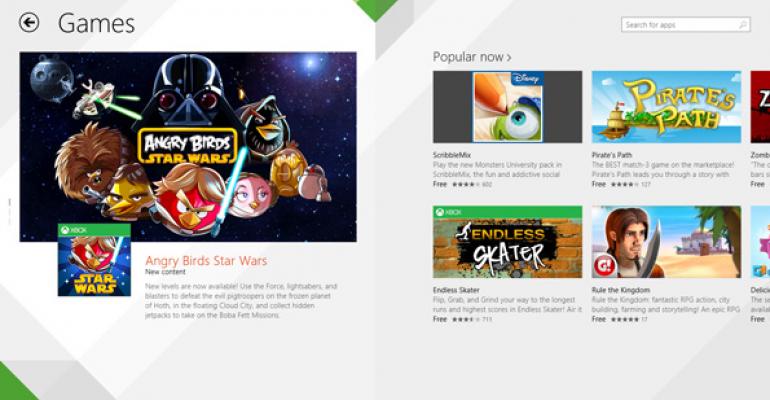 Looking over my complaints about the initial release of Windows 8/RT, the lack of scalability in the Windows Store app was among the most strident. As originally envisioned, Windows Store was a terrible, static, and category-driven experience. But in Windows 8.1, Windows Store has been reborn. And now we finally get the dynamic, beautiful and useful electronic storefront we wanted.

As noted previously in my post In Blue: Windows Store 2.0, the new app dispenses with the static user interfaces and seas of expressionless tiles to provide a more dynamic and attractive experience that is tailored to the individual. Ted Dworkin, the Director of Program Management for Windows Store, told me in a pre-Build briefing that the new Store was “hit driven, list driven and habit forming.” It’s powered by Bing and changes automatically over time.

I had mentioned the new app bar previously, but Dworkin pointed out something I missed that’s obvious in retrospect: The entire category-based UI of the original Store, which stretched out horizontally for screens and screens worth of information, is now replicated right in that app bar. Nice.

The new Store isn’t just about presentation, however. Now, it uses currency, not Microsoft Points. And you’ll be able to buy gift cards and add money to your account, just as you could previously buy blocks of Microsoft Points. This means you could, for example, load up a child’s account with a set amount of money so they could buy their own apps or games. (I assume those with existing MPs will see those converted to cash value.)

In the previous version of Windows Store, you would typically sign-in each morning and see a small number on the Store tile, indicating that that number of apps were ready to be updated. In Windows 8.1, you won’t see that number anymore as apps are auto-updated now. (You can disable this if you want.)

As with other built-in Modern apps, Microsoft is also now providing an in-app Search box, right from the main view, that lets you search the Store—and only the Store—using a context-sensitive tool with drop-down suggestions.

And the search results? They’re attractive, useful and easily filtered.

Overall, the changes to Windows Store are quite welcome. And while I’m still investigating a few purported changes that I don’t see yet in the Store UI—for example, that the PC limit for installed apps is going up past the current limit of 5—what’s available now in the Preview already makes a huge difference.