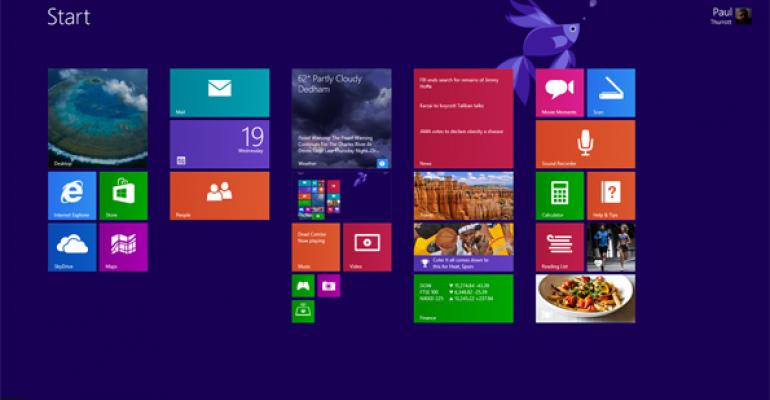 Microsoft is awfully sensitive about the term Start button, but make no mistake: The Start button is making a huge comeback with the Windows 8.1 update. Indeed, the suddenly new-again Start button is in fact available all over Windows 8.1, in the desktop and in all Metro experiences … including, oddly, the Start screen.

(To be fair to Microsoft, what we’re really seeing here is an enhancement to the Start tip that debuted in Windows 8/RT, and I suspect that’s where the reticence comes from. Well, that and stubbornness. But for the many Windows users who absolutely refused to even consider Windows 8 until this atrocity was reversed, this evolved user interface is one thing and one thing only: The Start button. So be it.)

By default, the new Start button is only visible in the desktop environment. This makes sense since users expect to see it there and it’s exactly where it should be, right at the left end of the taskbar.

When you mouse over this button—and this is true anywhere in Windows 8.1, not just on the desktop, the Start button features animates from white to the accent colored used by the theme you’ve configured. (In my case, dark blue.) This animation is identical to the effect you see on the Start charm when you display the Charms in Windows 8.1 as well.

You can now right-click the Start button to access an improved version of the power user menu that debuted in Windows 8/RT as well. (I write about that in another Windows 8.1 hands-on guide.) Previously, you had to move the mouse cursor all the way into the corner of the screen first.

As with the Windows 8/RT Start tip, the Start button is invisible in the Start screen, PC Settings, or any Metro-style app by default. But if you move the mouse cursor into the lower left corner of the screen, it appears as before, but using the new style.

If you then move the mouse up the left edge of the screen, Switcher will appear (as before), with the Start button ever accessible.

Basically, if you’re familiar with how the Start tip worked in Windows 8/RT, there are only two differences after the install of the Windows 8.1 update. First, the Start button is now always visible in the desktop environment. And second, the button has a different look and feel that is more consistent with the Start button from previous Windows versions, while utilizing the new Windows logo. In fact, if you’ve used the Stardock Start8 utility, you may be struck, as I am, by how similar this new Start button looks to the one installed with that tool.

Unless you’re still pining for the return of the old-school Start menu—and please, don’t hold your breath—it’s pretty clear that the Start button changes made in Windows 8.1 will satisfy most complaints. Certainly, I’m fine with it.