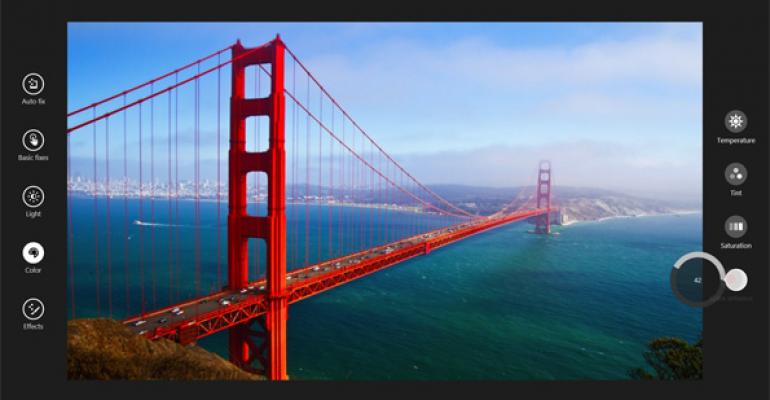 Curiously absent from the list of Windows 8/RT apps that were updated this spring, the Photos app has now received a major update with the Windows 8.1 Preview. It’s a mixed bag, though. On the one hand, the app picks up some decent photo editing functionality. But it’s lost the online service integration that made the original version of the app interesting.

It’s not clear if that last bit is intentional, or something that will be fixed by the end of the pre-release period. But in its current incarnation, the new Photos app can only browse (and thus fix) photos that are stored on the current PC. This means no more SkyDrive, Facebook, or Flickr integration, and no way to access photos on your other PCs.

Navigate into a folder with actual photos and things start to get a little interesting. Instead of the tall tiles from the earlier version of the app, Photos now displays more standard-looking square tiles.

Some options here have changed. Slide show and Import are missing from the app bar, but there are new commands (in addition to Select all, which carries over): New folder and Details. The latter enables a less graphical view that fits more content on the screen at once.

Select a single photo from any folder view and you can delete, copy, cut, or rename it, or open it with another app. Select two or more and the options drop to delete, copy and cut.

Things get more interesting when you view an individual photo. By default, the photo is displayed full screen, with absolutely no ornamentation (or “chrome”) to get in the way, as you’d expect. But you can bring up an app bar here that offers some new options.

You may recall from the initial Photos app version that this screen included Set as, Delete, Rotate and Crop commands, plus Slide show. In the new version, Delete, Set as, Slide show, Rotate and Crop carry over (though Set as loses the “App background” as that doesn’t appear to be an option anymore). Open with lets you open the current photo with another app (or desktop application, which is appreciated).

Edit is another thing entirely. In this mode, you have four main areas of edits, which are represented by buttons on the left of the screen: Auto fix, Basic fixes, Light, Color and Effects. Each has various sub-options which are controlled by tiles or buttons on the right. For example, selecting Basic fixes displays Rotate, Crop, Red eye and Retouch buttons.

Some of these editing tools are surprisingly decent. Using Effects, Selective focus, I was able to create a really nice rendition of that original sushi shot in which only the front piece of the roll is in focus.

Overall, the new Photos app feels incomplete to me, a sort of “two steps forward, two steps back” kind of thing. The new editing functionality is great, but the loss of online services integration is puzzling. It has to be temporary.