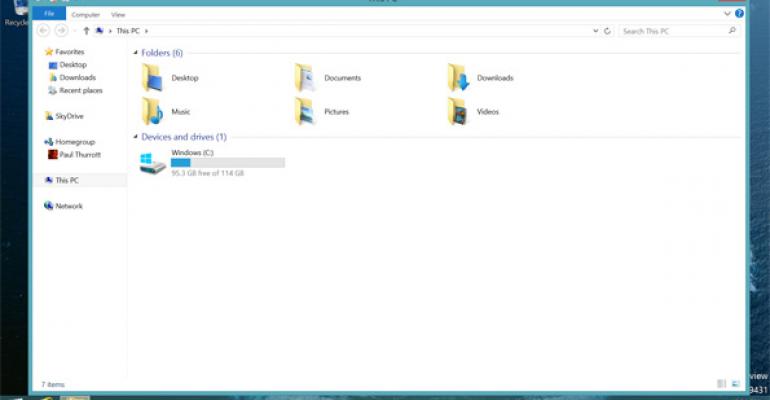 Hands-On with Windows 8.1: This PC

With the Windows 8.1 update, Microsoft is simplifying the default view users see in the File Explorer, replacing the previous Computer view with something called This PC. But while the ongoing attempts to simplify the desktop are understandable, the biggest shocker here may be the sudden de-emphasis of libraries.

If you use Windows 8 or RT today, you’re probably already familiar with the ways in which the desktop experience has been simplified, with Windows Explorer being renamed to File Explorer, for example, and given a simpler and slightly more touch-friendly interface. These simplifications continue with the Windows 8.1 update.

Computer—which was called My Computer in older Windows versions—has been renamed again, to This PC. But this new default view in File Explorer isn’t just renamed. It’s also be redesigned to be simpler and more obvious.

First, the Libraries node in the Navigation pane (on the left of the File Explorer) window is gone. Libraries are still available in Windows 8.1, but they’re being de-emphasized and left to power users. Normal users can simply use the built-in special folders—Documents, Music, and so on—or use a new PC Settings interface to map file save/open locations to a new place (such as an SD card on tablets).

Second, hard drives and removable drivers are no longer segregated in the new This PC view, and you won’t see a cascading series of sub-entries on the This PC entry in the Navigation pane. Instead, there’s a new group called Devices and Drives that contains all connected drives, regardless of type. (And let’s face it, “Hard Disk Drives” was a bad name in this age solid state storage anyway.)

Simpler doesn’t always mean less. In addition to removing and consolidating some items, the default This PC view also displays a new Folders group at the top that displays your special folders; Desktop, Documents, Downloads, Music, Pictures and Video. The theory being that typical users will want to access these locations frequently.

Looking through the ribbon commands—and yes, the ribbons are of course hidden by default—I see no changes, so aside from the libraries bit, this is mostly about presentation.