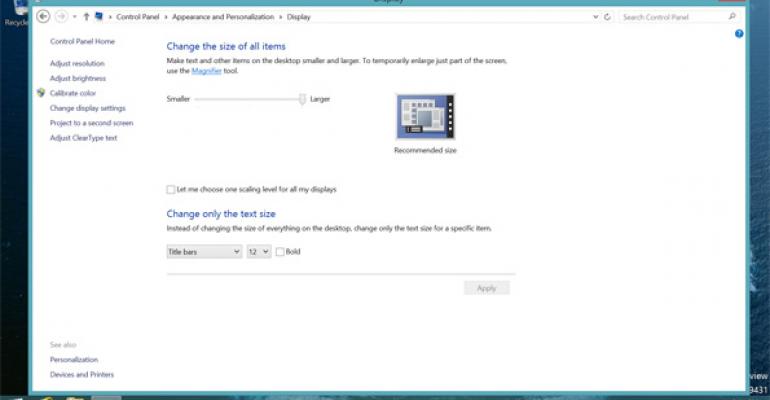 Questions remain about how well this fixes the problem

Thanks to a proliferation of mobile devices with super-high-resolution displays and a continued reliance on desktop applications, Microsoft is attempting to fix longstanding issues with desktop display scaling as part of the Windows 8.1 update. In the Preview version, however, these changes appear to be only partially implemented.

I first wrote about the issues with desktop display scaling in Going Pro: Replacing the Desktop, as this is a serious issue on the Surface Pro, which offers a relatively high resolution (1080p) display in a tiny 10-inch form factor. I also previously wrote about Microsoft’s evolving interface for desktop display scaling back in May in the post In Blue: Automatic Desktop Display Scaling.

Since then, things have changed a bit.

It’s a bit hard to know how the new Display control panel will behave on each PC, as the display scaling feature—which is automatic but can also be configured manually—behaves differently depending on both the physical size of the display and its resolution. It’s also pretty clear that this feature is currently only partially implemented. That said, I have tested it on several PCs and can make the following generalizations.

Big screen, regular resolution. On my 2012-era Samsung Series 9 Ultrabook, which features a large 15-inch display but a sub-true-HD 1600 x 900 resolution, the options are basic. You get two scaling options, Smaller (i.e. 100 percent scaling, or “normal”) and Larger (150 percent scaling).

You can also go for manual scaling via a Let me choose one scaling level for all my displays option (more on this below) that returns things to Windows 8 days on a single display system.

Tiny screen, high resolution. What about Surface Pro? On this tiny-screened device with a 1920 x 1080 resolution, there are three scaling options, and the middle of the three (Medium) is indeed 125 percent, and the default on this system.

Two screens of differing sizes and resolutions? Looking at the option Let me choose one scaling level for all my displays, it’s hard not to imagine that you can choose different scaling options for different screens. Perhaps you could attach a large 27-inch screen to that Surface Pro and have that screen appear at 100 percent scaling while the device’s internal screen is at 125 percent or 150 percent scaling.

I wasn’t able to get this to work, and I tried it on multiple machines with multiple external displays, with the displayed extended and with internal- and external- only. Given the language of that option, however, it’s pretty clear that some form of individual scaling configuration will work with Windows 8.1. And who knows? Maybe someone else will get this working in the Preview as well.

For now, I can say that display scaling on the desktop will likely never be great. But it’s definitely better in Windows 8.1. The question remains: How much better?