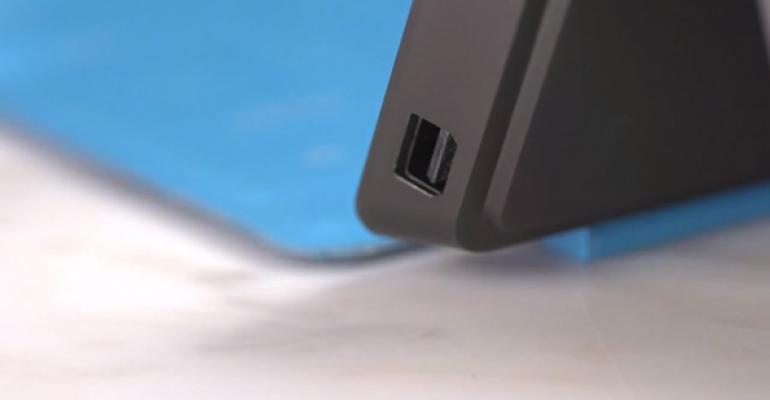 As you may know, I’ve been using Surface Pro in lieu of my normal desktop PC set up, and one of the things I’ve been experimenting with this week is the device’s video-out options. And I’ve discovered two things that may be of interest: Video-out over Mini DisplayPort is indeed more efficient than doing so over USB. And yes, you can in fact connect two external displays to Surface Pro.

Responding to my article Going Pro: Replacing the Desktop, a number of readers asked me if I had compared the USB 3.0 docking station’s video-out with that of Surface Pro’s built-in Mini DisplayPort. At the time I hadn’t. But now that I have, I’ve come to the conclusion that Mini DisplayPort is more efficient in the sense that it keeps the Surface Pro’s dual internal fans at bay. That is, driving the display through USB appears to trigger the fan noise more frequently.

Of course, the reason I chose USB 3.0 originally is that I wanted the docking set up to be as simple as possible, with the fewest possible cables to worry about. If I drive everything through the USB 3.0 docking station, I only need to plug two things into Surface Pro when I “dock” it for desktop use: The USB 3.0 cable and the power cable.

With Mini DisplayPort, a third cable is introduced. But as noted earlier, this appears to be “better” from a fan noise perspective. (Surface Pro still gets pretty warm, however.) I’ve been using the Surface Mini DisplayPort to VGA Adapter for this purpose for the past week, and the fan noise has absolutely been cut, and pretty dramatically. Since I’m sensitive to sound, I prefer this set up and will put up with the extra cable.

A few readers also asked about driving more than two displays. With the understanding that I have no desire to run such a set up normally, I drove my normal external display—a 1920 x 1080 Planar monitor—through the USB docking station. And then I drove a second external display, an older Dell 4:3 monitor running at 1280 x 1024 via the Mini DisplayPort using Microsoft’s Surface HD Digital AV Adapter attached to an odd HDMI-to-VGA adapter I had previously used with a Mac mini. (Don’t ask, it works.)

It worked perfectly. A screenshot of this crazy three-screen set up looks like so:

But this shot doesn’t take into account the differing physical sizes of the screens. When you resize the middle (built-in Surface Pro) screen to its roughly correct size, the shot looks like so:

Of course, in my normal set up, I use only the Planar display and leave the Surface Pro’s internal screen off. Unlike many, I’ve never warmed to multi-screen set ups, though I’ve used them many times. I just prefer a single big screen, personally. I realize I may be the exception on this one. But Surface Pro works very well with multiple displays, regardless, so whichever set up you prefer should be achievable.