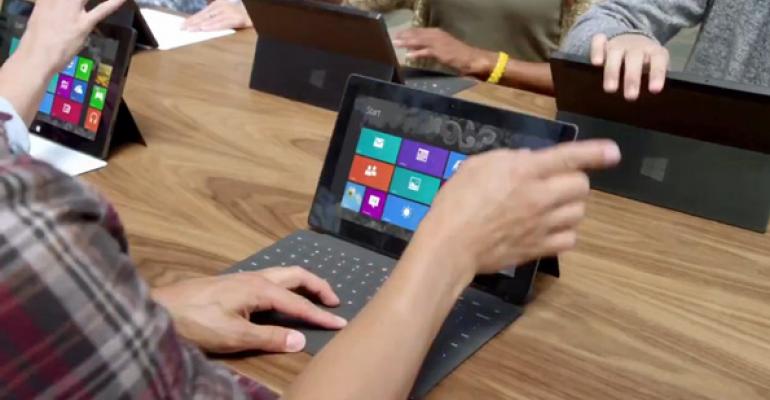 Surface Pro outperforms Surface RT handily, providing us with a blueprint for how each might be best used

While most people reading this site probably understand the major architectural differences between Surface Pro and Surface RT, there are some other less obvious differences that are just as relevant. For example, once you get past the lack of desktop compatibility on Surface RT, you can perform many of the same tasks on that device as you can on Surface Pro. But performance issues make this less than desirable, putting Surface Pro over the top as for productivity.

We speak generally of these devices in terms that help define them. For example, Surface Pro is seen as a new type of Ultrabook that can be sometimes used as a pure tablet. And Surface RT is seen as a pure tablet that can sometimes be used as an Ultrabook. These pat definitions, where Surface Pro is primarily for productivity/creativity and Surface RT is primarily for content consumption, are convenient and perhaps tossed around a bit too easily.

There’s just one problem. These pat definitions are entirely correct.

Now that I can use Surface Pro and Surface RT side-by-side and alternate between the two for the same tasks, I can see that the performance difference between these two devices is quite stark. I always found Surface RT to be a bit … leisurely, for lack of a better word … but now it’s clear that this device barely gets out of its own way in routine productivity scenarios that even the cheapest PC wouldn’t struggle with. It’s amazing how much faster Surface Pro is. At everything.

One thing I’ve been doing since Surface Pro arrived is to disconnect from my Frankenstein-like desktop dock and try to compute wirelessly from around the house. I had done this previously with Surface RT, of course, but since I’ve replaced my desktop PC with Surface Pro this is a bit of a different kind of test. Aside from the desktop scaling issues I’ve already raised, and the short adaptation time switching from my large and ergonomic desktop keyboard to the much smaller and Ultrabook-like Type Cover, this transition is pretty painless and seamless.

But when I switch over to Surface RT, it’s annoyingly laggy. For example, I was working on the Xbox Music Book the other night. Performance on Surface Pro was exactly what I’d expect, and completely non-notable. It just worked, with no pauses or strangeness. Didn’t think about it once.

Switching to Surface RT was like swimming in molasses. You can open SkyDrive-based documents from within Word 2013 easily enough, so the lack of SkyDrive integration on the desktop wasn’t hugely problematic. But the document took a painfully long time to open, with Word hanging mid-way before recovering. The performance while writing and saving the document was terrible, noticeable. And, oddest of all, switching between Word (on the desktop) and Xbox Music (a Metro app) triggered the weirdest pauses and lags. For example, switching back to Word from Music, the desktop would appear first, empty, and then Word would finally appear after a pause. Every single time.

But it’s not just that. As I noted in my comparison of otherwise identical Intel Core i5 “Ivy Bridge” and Intel Atom “Clover Trail” PCs in A Tale of Two Hybrid Windows Devices: Clover Trail vs. Ivy Bridge, acceptable hardware can make a huge difference when compared to marginal hardware. But with Surface Pro and Surface RT, the difference is even more pronounced. No surprise there, as I had previously found that Atom “Clover Trail”-based PCs outperform Windows RT/ARM significantly. I wrote about this in Windows 8 Architecture Wars, Part 1: Clover Trail vs. ARM.

What this means is that apps open more quickly on Surface Pro and then run more smoothly (and no, I’m not going to use the term “fast and fluid,” but there’s a reason Microsoft came up with that). You can do more at one time, thanks to the additional 2 GB of RAM, without running into disk thrashing and even worse performance.

I know, this seems obvious. It helps to actually experience it in real world usage, however.

And to be fair, Microsoft designed the Windows RT system at the heart of Surface RT to deliver entirely consistent performance across devices, something that is impossible in the “Wild West” of the traditional Windows world. There’s no Windows Experience Index (WEI) score provided because each machine, conceivably, will work identically. Battery life is not predicted when you hover over the connectoid, you just get the percentage of battery life left. Heck, you kind of don’t need to know: Battery life on RT is stellar.

But in real world terms, what this means to me is that it doesn’t make sense—for me—to use Surface RT around the house, while keeping Surface Pro connected to my desktop dock set up. It’s just too slow.

Likewise, when I do fly, it doesn’t make sense for me to waste Surface Pro’s limited battery life on movies and other content. I’ll need to bring another device for entertainment. Surface Pro is just for work.

So via experience using each side-by-side, the stated missions of these devices become clear.

Surface with Windows 8 Pro doesn’t get enough battery life to be your only device, so it can’t ultimately satisfy that “one device that does it all” concept that so many are wishing to make real. You’ll still need an MP3 player or a small consumption device—a ~7-inch iPad mini, Nexus 7, or Kindle Fire HD, perhaps—for entertainment on the go. When it comes to productivity, of course, Surface Pro really delivers. And it does offer a peek at the future of hybrid computing because it can be used as a tablet, and can be used in some situations where a stock Ultrabook wouldn’t work. A cramped airline seat, for example. The pen—as you’ll see in a coming article—is pretty amazing if you need that kind of thing.

Surface with Windows RT, like the iPad, is more toy-like in that it’s an entertainment device first, with some abilities related to occasional productivity. I might argue that the inclusion of Office puts Surface RT over the top in this regard, but one might also make a more compelling argument for the iPad’s vast array of apps and content. I can’t refute that. And Surface RT performs almost poorly enough that the inclusion of Office is somewhat muted.

But as I noted previously, where Surface RT represents Microsoft’s vision of the future of computing, with the emphasis on “future,” Surface Pro is more aligned with the realities of today. It nods to the future, points the way. But the battery life keeps it stuck in 2nd gear.

Ultimately, all this testing has brought me back to step one. Performance and compatibility vs. battery life and light weight. Those are just some of the tradeoffs you must wrestle with when you examine these devices.