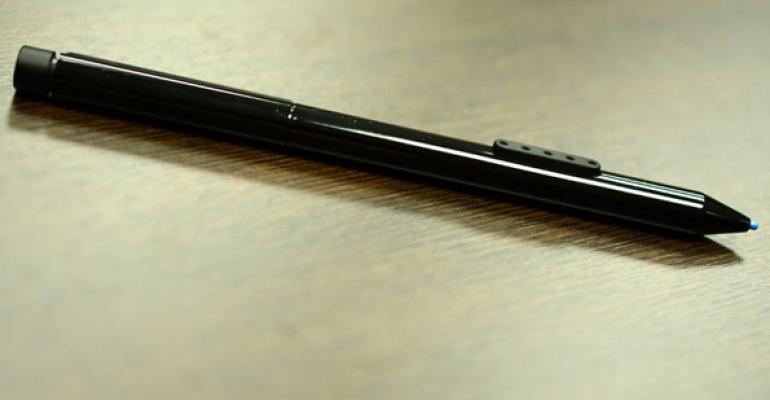 With years of Tablet PC experience behind me, using the Surface with Windows 8 Pro's new Surface Pen is like going back in time. It looks and works identically to the pens that PC makers used to provide with Tablet PCs over a decade ago, and it's unclear where there's anything but a niche market for such an accessory. That said, those who need such a thing should be excited by the capabilities of Surface Pen.

In fact, Surface Pen, combined with related hardware built into Surface Pro, is arguably one of the key differentiators between this device and Surface RT, not to mention many other touch-based Windows 8/RT devices. If you're not familiar with this type of accessory, the short version of the story goes like this...

In the early 2000s, Microsoft developed an offshoot of Windows XP called Windows XP Tablet PC Edition that was designed for a then-new breed of PCs called Tablet PCs. These Tablet PCs came in two form factors, convertible laptops, with featured screens that could be used in normal laptop mode or flipped around and used like a tablet, and slates, which were “pure” tablet devices that relied on a pen, or stylus, and could be docked for use with a keyboard and mouse. (And if you’re shaking your head in wonderment at the similarities between 2002 and today, you’re not alone: As I wrote in Tablet PC Redux?, the parallels are pretty amazing.)

Tablet PCs never took off in the market, despite the personal backing of Microsoft’s over-rated founder, Bill Gates, and subsequent generations of the software—like Windows XP Tablet PC Edition 2005—and new generations of hardware that solved the battery life and portability issues of the originals. I used just about every single Tablet PC ever created, and I never really warmed to the designs, though I appreciated Microsoft’s amazing technical achievements in handwriting recognition and the use of handwriting as a first-class data type (that is, it didn’t need to be translated to text to be searched). There just wasn’t a volume market for these devices.

Flash forward to 2010 and the release of the iPad, which touched off (sorry) the current market for what we sometimes called media tablets. The iPad and its ilk are dumber but simpler than Tablet PCs, and that’s why they’ve resonated with consumers, which are buying them up by the tens of millions each year. But as Tablet PC purists will tell you, the iPad’s finger-based controls are like finger painting compared to the amazing accuracy you get with a Tablet PC pen, which offers pressure-sensitive control good enough for creating the finest (simulated) oil painting. Plus all that amazing handwriting stuff.

With the release of Windows 8 and Surface Pro, Microsoft and its partners are running down the Tablet PC rabbit hole once again. This device offers a standard Tablet PC pen, just like the ones we used years ago, albeit with even better specs and accuracy. But it’s sort of amazing how what’s old is new again: Some of the interfaces you use for the Pen are straight out of that original Tablet PC software from 2002.

So what’s the difference between Surface Pro and Surface RT, which supports something called a capacitive pen, which is really just a cute word for something that looks sort of like a pen but is in fact really just a slightly more accurate replacement for your fingertip. When Surface RT first arrived, I picked up a cheap capacitive pen for testing, and while some may scoff at this kind of thing, I will admit that it is actually pretty helpful for tapping on small on-screen targets—especially on the desktop—that would otherwise be hard to hit with a finger.

Capacitive pens will work with any touch-enabled Windows 8 or RT device; they don’t require a special screen or any additional technology. But they are of course limited in use. You don’t get different levels of pressure and the accuracy is only a bit better than using your finger (and probably no better if you’re a small child).

Surface Pro, meanwhile, includes a special digitizer in the screen that enables the use of an electromagnetic pen. Microsoft goes to great lengths to explain why this is so amazing and thin and so on, but the point is that this digitizer is essentially a modern version of what was included in all Tablet PCs a decade ago. (The screen is also better than RT’s in other ways. For example, it supports 10 touch points compared to 5 for Surface RT.)

Surface Pro also comes with Surface Pen. This is an electromagnetic stylus that supports an astonishing 1024 pressure levels, meaning that the system can understand that many variances in how hard you are pushing down on the screen. In writing apps like OneNote, that means thick and thin lines. But this capability really matters in drawing and painting apps where you can really emulate real-world artist tools such as pens, paintbrushes, and so on. Surface Pen also has an “eraser,” a soft top that can be used to erase on-screen lines and a right-click button on its barrel. (It’s easier to tap and hold to get the right-click action, however, just as you would with touch.)

Surface Pen also includes a unique magnetic latch that lets you “clip” the pen to the side of the Surface, using the power supply connector. This works OK, I guess, but it has a couple of ramifications. First, it means you can’t connect the power supply and pen at the same time. And second, it means there is no way to insert the pen into Surface Pro, as is the case on virtually all other Tablet PCs (and Windows 8-era devices with electromagnetic pens, including the Samsung ATIV Smart PC Pro 700T). So you’re going to lose this pen. It’s just a matter of time.

In use, the Surface Pen is like a blast from the past. Literally. There are old-school Pen and Touch and Tablet PC Settings control panels for configuring the pen and screen for the pen, and it’s like stepping back in time.

But there is some new stuff. Surface Pro supports an advanced palm-blocking feature that really works. As the pen gets close to the screen—say, about an inch away—the screen detects its presence and assume you want to use the pen. So it turns off multi-touch, thus eliminating false taps and gestures generated by your hand. What this means is that you can write or draw with Surface Pen naturally on Surface Pro without worrying about your hands messing things up.

Surface Pen of course works in handwriting-capable apps (and applications) such as OneNote, though I rarely use it for such work since I can type much faster than I can write. (And more accurately: My handwriting deteriorates very quickly these days.) It also works great in Metro-style painting apps such as Fresh Paint, and it is here that the pen has gotten the most use. Not by me—I think these pens are borderline useless for my needs—but by my 11-year-old daughter, who quickly realized that Surface Pro + Surface Pen was about a million times more amazing than her mother’s Samsung Galaxy Note II (which also includes a pen). Ah, children.

Some tech enthusiasts have complained that Surface Pro does not support third party applications such as Photoshop directly, because they require third party APIs. This means that you can’t use the pressure sensitivity of the Surface Pen with such apps, yet, which is true, though Microsoft says it is working with Adobe to make that happen.

When that capability is available, one secret use of Surface Pro + Surface Pen will become all the more valuable. You see, you can of course dock Surface Pro with desktop components as I’ve described earlier in this series, using, among other things, a large desktop display. And in this mode, you can do such things as disable the Surface Pro screen and use only the large desktop display. In this mode, however, you can still write on the Surface Pro screen with Surface Pen. That’s right: Surface Pro is basically the largest and most accurate Wacom-style drawing tablet you can get, and those artists, architects, and others who need this capability will be amazed by this.

Surface Pen can also of course be used as a pointing device, so you can use it to select small items on screen easily, navigate through the UI, and so forth. Here, the right-click button becomes more helpful, though again tap-and-hold works better in my experience. This, again, is just like Tablet PC days, and the File Explorer on Surface Pro adopts the “check boxes” in the file views as we used to see on XP Tablet PC, as well as the “left-handed” pop-up menus that are designed to be viewable when accessed via touch or pen. (They appear on the left, rather than the right, and lefties can configure them to do the opposite.)

Overall, Surface Pen is a familiar tool for Tablet PC fans, and a nice addition for those who never owned such a machine. I’ll never personally use it, but I spend most of my time typing, not drawing or writing. For those who need such a thing, the combination of Surface Pro and Surface Pen will be very enticing indeed.