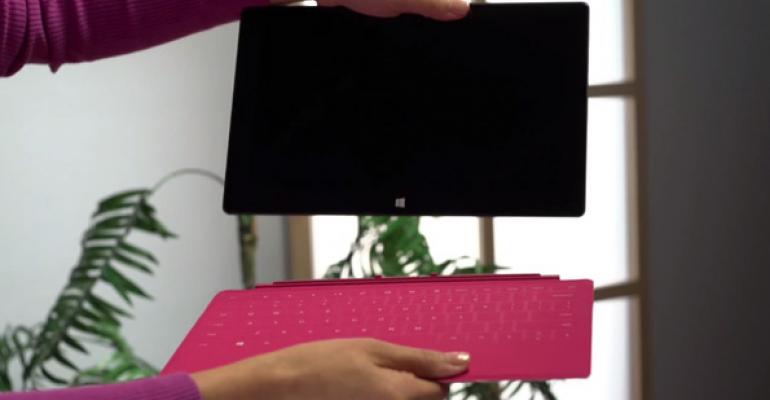 Can you replace an Ultrabook with a Surface Pro? Heck yeah you can

While replacing a desktop setup with Surface with Windows 8 Pro proved to be a fairly arduous task, Microsoft’s new PC tablet is more of a natural on to the go. Indeed, Surface Pro shines as a replacement for both an Ultrabook and a tablet, assuming the lackluster battery life issues doesn’t get in the way.

I wrote about my experiences converting from a desktop PC setup to Surface Pro in part three of this series of articles, Going Pro: Replacing the Desktop. That process, which is arguably still ongoing and will be for some time to come, initially occupied most of my first full weekend with Surface Pro. And it was an ugly time, believe me. I’m still sort of reeling from it, two weeks later.

But I’m regularly reminded that my own computing needs and wants don’t necessarily map to those of mainstream PC users. I use a powerful desktop PC at home and a large (for the machine type) 15-inch Samsung Series 9 Ultrabook when I’m on the go, and around the home from time to time when I feel like working, or just catching up on things, from outside by home office.

Most Ultrabook users, I’d imagine, stick with a more mainstream model, such as the 13-inch version of my own Ultrabook, which is pretty much both best of breed and a superior example of what an Ultrabook can be. (Some also use 11-inch Ultrabooks, which I’d imagine are the second-most popular form factor.)

In this article I’d like to address how the Surface Pro can replace an Ultrabook and which of Microsoft’s growing family of Surface accessories make the cut for regular use.

In my case, at least, replacing the Ultrabook with Surface Pro comes with none of the drama as does replacing the desktop PC. There are a few reasons for this. Again, in my case, my daily-use machine is a desktop computer, so I could easily configure and outfit the Surface Pro for duty on the side, without breaking my work day. And second, the Ultrabook-to-Surface Pro switch is more straightforward. I’ve argued elsewhere that Surface Pro is a new twist on the Ultrabook, one in which the screen is both multi-touch-capable and detachable, and usable as a standalone tablet. So the move is less painful.

It’s not without its issues, alas.

Samsung’s 13-inch Series 9 Ultrabook includes two USB ports, one USB 3.0 and one USB 2.0, while the 15-inch model I use includes a third such port, which is USB 3.0. By comparison, Surface Pro only includes a single USB 3.0 port on the tablet itself, plus a second charging port on the power brick, which would certainly be useful on the road. Still, I’d really prefer to see a second USB 3.0 port on the device itself. Even with my Ultrabook, I often have a number of devices connected simultaneously. I’ll have to adapt with Surface Pro.

The screen size is also an issue. For years, I’ve dreamed of using ever-smaller (and thus lighter and much more portable) devices, and I used to stare in envy at the mini-laptops and devices I’d see used by some Asian press members at trade shows. The reality, however, is that I’m a big guy and I have huge hands, and this dramatically limits the types of devices I can use on the road. That 15-inch Ultrabook is a strange anomaly—it was the only such device when it was first released, and I think only ASUS offers a similar model today—but also a wonderful combination of a big screen running at a reasonable resolution (1600 x 900, which I find nearly perfect) and a very thin and light form factor. This device weighs only 3.6 pounds.

The Surface Pro screen is a tad smaller than those of the smallest Ultrabooks. It also has an exceedingly high resolution screen (1080p), which some appear to love for some reason, but I’ve already complained about enough. (Long story short: 1366 x 768 is the only acceptable resolution on such a small screen, at least until/if Microsoft fixes the desktop scaling issues I’ve raised.)

The tiny screen is a problem. On a business trip, I will set the screen scaling to 150 percent and hope for the best. Based on my usage around home, around town and on a few trips into Boston, it’s certainly workable.

The other size-related issue is the keyboard. After having previously decided that the Touch Cover was somehow superior to the Type Cover for Surface RT—a decision I’ve since retracted given more exposure to both—I’ve come to the conclusion that the Type Cover is the only logical keyboard at the moment for Surface Pro.So if you do get a Surface with Windows 8 Pro tablet, you will want/need a Type Cover as well. It’s a bit expensive at $130, but that’s $130 well spent.

Interestingly, the Type Cover keyboard isn’t that much smaller than they keyboard on the 13- and 15-inch Samsung Series 9 laptops. (They’re nearly identical.) As you can see here, they are identical in height:

And when you line up the Type Cover over the 15-inch Samsung’s keyboard exactly, you can see that the Type Cover is about .75 inches less wide (that last column of keys on the right doesn't count; those are not part of the main set of keys):

That’s a difference you’ll notice—I certainly do—but the important bit here is that it’s workable. I can switch to the Surface Pro, start typing, and be up to speed very quickly. Even with these gorilla fingers. (I’m curious if the lack of a palatial wrist rest, like the one on my Ultrabook, would be an issue over time. The smaller Type Cover trackpad doesn’t bother me in the slightest: In fact, the smaller the better.)

Looking at this objectively, you could make the argument that a 2 pound Surface Pro plus .55 pounds for the Type Cover results in a carryon weight of about 2.5 pounds, a full pound less than the Ultrabook I use and about the same as the 2.55 pound curb weight of the 13-inch Samsung Series 9 Ultrabook. So it’s really portable.

This is even truer when you consider the ability to remove the Type Cover from the Surface Pro and just use the tablet in standalone mode. There are many times while traveling when this would be valuable, especially in the increasingly tight coach seating arrangements you’ll find on planes. Here, you could use the Surface Pro to watch movies—at least for a little while, given the battery life described below—in places where the Ultrabook wouldn’t work at all or be a tight fit. Or you could use the bundled electromagnetic pen to edit documents in tablet mode. Not too shabby.

Of course, when I do travel with the Ultrabook, I also bring a few tablets, including an Amazon Kindle eReader and some form of “real” tablet, lately the 7-inch Kindle Fire HD. Neither of these devices are big or heavy, but when you take them all together it does add up. The ability to do it all with a single device is a huge draw, though again for the battery life reasons described below, this is more theory than reality with Surface Pro. (Update: A rumored battery-powered keyboard case or just battery attachment would make this a better fit.)

So let’s talk battery. Where Samsung rates both of the Ultrabooks I’ve described here as having up to 9 hours of battery life, my real world usage comes in closer to 6.5 to 7 hours on each. Microsoft, meanwhile, is more realistic: It had claimed that Surface Pro would get about half the battery life as does Surface RT, and sure enough it gets 4.5 to 5.5 hours of battery life, compared to 9 to 10 hours for Surface RT.

That’s not good enough. Not if you travel a lot.

As I see it, there are two ways around this, assuming you opt out of the third, which is to not buy a Surface Pro. You could continue to bring other devices on trips for entertainment, as I will do. Or you could investigate portable charging solutions and use that device with Surface Pro while on a plane or in other non-mobile but off-wired power scenarios.

This is an area with which I’m not familiar. But you may know that there are many mobile charging solutions for small devices, like phones and tablets. There are likewise bigger/heavier mobile charging solutions for portable computers like Surface Pro. I’m curious if anyone has a decent recommendation for such a device. But understand the inelegance of this: You would need to carry on your Surface Pro, this charger, and your Surface Pro power cables. Ugh.

If you often provide presentations and speak at events, you’ll want to invest in Microsoft’s two Mini DisplayPort adapters, Mini DisplayPort to VGA and MiniDisplay Port to HD AV (HDMI). I’ve now used both, and they work well, are reasonable inexpensive ($39.99 each), and let your Surface Pro work with virtually any screen. I used the VGA adapter to give a user group presentation using an ancient projector, and while the resolution was limited, it worked fine (and PowerPoint 2013’s new presenter mode is amazing). And I’ve used both adapters with my display at home for testing purposes (more on that in a future article). Excellent.

Less successful is Microsoft’s Wedge Touch Mouse Surface Edition.This tiny device—which, for whatever it’s worth, Mary Jo Foley really likes—is too small for my own giant hands, and it’s pretty expensive at $69.99. But it does have three things going for it: The small size makes it ideal for carryon, the new black color of this version of the mouse makes it a nice visual fit with Surface Pro, and because it is Bluetooth-based, you won’t need to plug in a dongle and tie up the one on-device USB port.

All that said, I prefer a much bigger mouse, and when I travel I bring a spare Microsoft Explorer Mouse with me. That mouse unfortunately does use a proprietary dongle, and while this was never an issue with previous PCs, it will be on the Surface. I’ve been investigating bigger Bluetooth-based mice, but Microsoft doesn’t make a good one in my opinion. I’ll keep looking. But maybe a small, non-powered USB hub will do the trick.

Based on my few excursions outside the house with Surface Pro, I suspect this device will be an adequate to ideal travel companion, based on your needs. I’m trending more towards the adequate end of that scale, but then I’m not your typical mobile worker. Still, there are clear benefits to such a set up, and it’s not hard to appreciate the lighter backpack weight, even if you do need to bring a few accessories along. This is one area where testing will be ongoing, but each time I untether the thing, I appreciate the size, weight, and form factor more.