/sites/all/themes/penton_subtheme_itprotoday/images/logos/footer.png
Recent
Recent
Tech Companies May Be Laying Off Employees, But Tech Workers Are Still In Demand
Dec 08, 2022
Apple to Encrypt Cloud Backups as Part of Security Revamp
Dec 07, 2022
How To Assess SSD Health in PowerShell
Dec 06, 2022
How To Check SSD Health via GUI-based Options
Dec 06, 2022
Featured
Ransomware, at Your Service
Dec 01, 2022
A Beginner's Guide to GitHub: What You Need To Know
Dec 02, 2022
5 Multi-cloud Security Challenges You Can Avoid
Nov 14, 2022
Windows 11 Migration Guide: 4 Best Practices When Upgrading
Oct 21, 2022 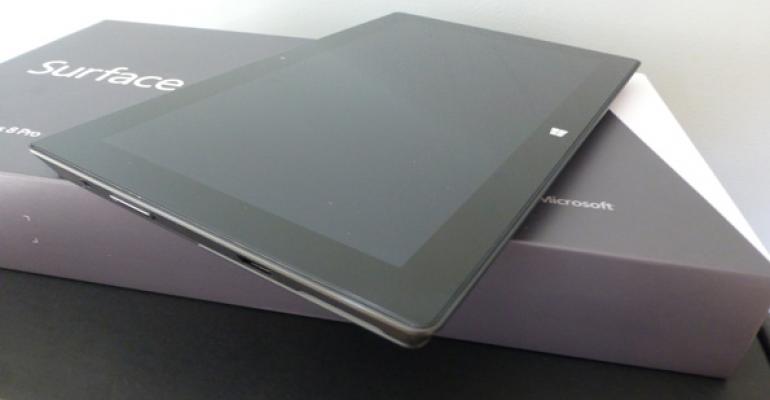 A look back at the "Going Pro" series

Here’s a look back at my “Going Pro” series, 15 articles that document over a month of time with Microsoft’s new hybrid Windows 8 device. There were ups and downs, but overall the Surface with Windows 8 Pro is revolutionary new direction for the PC, one that I hope Microsoft extends with new form factors in the future.

Note: There were a few articles I had plotted out for this series that were never published, including articles about games and professional applications. But I had also intended the series to span 10 articles over two weeks, and instead went over a month, writing 15 articles. In the end, I think I covered a lot of ground here, including some topics I didn’t anticipate when I started.

Day One with Surface Pro

My Surface with Windows 8 Pro tablet arrived with a ton of accessories about two weeks ago. As I had previously revealed, my intention was to move to using this device as my sole PC going forward, and this new series of posts will document this transition.

Pro on the Go

Since receiving a loaner Surface with Windows 8 Pro from Microsoft, I’ve made two mini-excursions into Boston, giving me a chance to see what it’s like to use the device on the go. And while a more representative long-distance trip will need to wait a few more weeks, I think I have a handle on how this performs in the real world.

While replacing a desktop setup with Surface with Windows 8 Pro proved to be a fairly arduous task, Microsoft’s new PC tablet is more of a natural on to the go. Indeed, Surface Pro shines as a replacement for both an Ultrabook and a tablet, assuming the lackluster battery life issues doesn’t get in the way.

Thinking About the Surface Screens

While I’ve spent a lot of time thinking about and writing about the screen resolution and scaling issues in Microsoft’s Surface with Windows 8 Pro tablet, one equally controversial issue that I raised has gotten a bit less attention: For the most part, the Surface Pro screen is identical to that used by Surface RT when using Metro-style apps.

While most people reading this site probably understand the major architectural differences between Surface Pro and Surface RT, there are some other less obvious differences that are just as relevant. For example, once you get past the lack of desktop compatibility on Surface RT, you can perform many of the same tasks on that device as you can on Surface Pro. But performance issues make this less than desirable, putting Surface Pro over the top as for productivity.

While a significant number of computer users are moving to tablets because of their superior simplicity, mobility, and usability, there are some key differences between the devices created by the various mobile platform makers. And among those differences is the notion of device orientation: Some are designed to be used in portrait mode by default, while others—like Surface Pro—are designed primarily for landscape use.

As you may know, I’ve been using Surface Pro in lieu of my normal desktop PC set up, and one of the things I’ve been experimenting with this week is the device’s video-out options. And I’ve discovered two things that may be of interest: Video-out over Mini DisplayPort is indeed more efficient than doing so over USB. And yes, you can in fact connect two external displays to Surface Pro.

Thinking About the Competition

For this 9th article in the “Going Pro” series, I’m going to take an unscheduled side-trip and quickly examine a key Surface Pro competitor. In the quickly evolving world of Windows 8 hybrids, is Surface Pro really the ideal choice?

When Push Comes to Shove

We’re flying to Mexico tomorrow morning, marking my first real trip with Surface Pro. But on the eve of this trip, I’m starting to hedge my bets. And I’m not sure if Microsoft’s new tablet is going to make the cut as my only PC for this trip.

A flight to Cancun, Mexico was an ideal chance to test Surface Pro’s battery life and form factor in real world conditions, and it performed like a champ. But two strange technical glitches ended up putting the day in the defeat column, though only one of them was Surface Pro related.

With its lackluster battery life, Surface with Windows 8 Pro isn’t necessarily the ideal choice for movies and other entertainment solutions. But Surface Pro has one big advantage over Surface RT in this category: It can run desktop applications like iTunes, Spotify and Rhapsody, opening it up to a far wider range of music, photo, and video apps.

With years of Tablet PC experience behind me, using the Surface with Windows 8 Pro's new Surface Pen is like going back in time. It looks and works identically to the pens that PC makers used to provide with Tablet PCs over a decade ago, and it's unclear where there's anything but a niche market for such an accessory. That said, those who need such a thing should be excited by the capabilities of Surface Pen.

Comparing Microsoft’s Surface Pro to Apple’s iPad, you see the visions of the two companies laid bare in hardware. Where Apple sees a “post-PC” era in which traditional PCs will disappear in lieu of media tablets and other electronic devices, Microsoft sees a “PC-plus” era in which PCs coexist alongside other devices. Apple may eventually be proven right. But today, we are still most definitely in the PC-plus age.

When a Surface Pro loaner unit arrived about a month and a half ago from Microsoft, I set out to document my attempt to move to using this device as my sole PC going forward, replacing both a tower desktop PC and my Ultrabook in the process. It’s been an interesting experience, but it’s time to wrap it up.