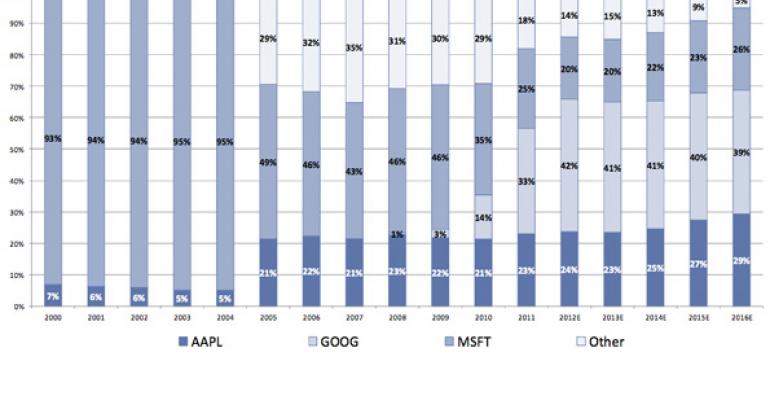 A slightly different take on the same conversation we've had before

Two months ago, I discussed a Forrester report that discussed a future in which a combination of device types—PCs, tablets, and smart phones—would constitute the market for general purpose computing. This would result in less market share for Microsoft overall but could also turn into a bigger overall business if the firm’s tablet and phone products take off. Today, a similar report from Goldman Sachs takes us down the same rabbit hole.

Check out my original Embracing a More Heterogeneous Future post for details about the earlier Forrester report. The mile-high summary is that Microsoft expected 30-35 percent market share in this general purpose computing market, though lower percentage-wise than its 95 percent share of the PC market, would in fact constitute growth. I have some simple math in the post to back up this assertion.

The Goldman Sachs report, which I’ve not see—I’ve instead had to rely on the Seattle Times’ reliable Janet I. Tu—is perhaps a bit more negative (from a Microsoft perspective). According to this firm, Microsoft controls about 24 percent of the market for what I will continue to call general purpose computing devices (PCs + tablets + phones) in 2012. And that share will rise to just 29 percent by 2016.

Tu notes a few interesting tidbits in the report related to Microsoft:

Uphill battle for tablets and smart phones. No shocker here, but Microsoft’s tablet and smart phone products lag the market leaders by a wide margin.

Consumer PCs sales flat in 2013. Echoing other recent bad news about Windows 8 and its impact on the PC market, GS says that consumer PC sales—an important component of Microsoft’s only area of dominance—will be flat in 2013.

I do find this bit interesting, though:

“We estimate that Microsoft would have to sell roughly 5 Windows Phones or roughly two Windows 8 RT tablets to offset the loss of one traditional Windows PC sale,” the firm noted. This suggests that the market share numbers it predicts for Google (phone-heavy) and Apple (tablet-heavy) are a bit out of whack from an “impact” perspective, and that Microsoft’s PC-based sales are somehow more valuable. This is tricky, since some of these devices are not head-to-head competitors (few would purchase a phone instead of a PC, for example). But I’m not going to go there.

Basically, I think that Goldman Sachs is simply providing the same basic guidance as Forrester did previously and that it’s not much different from the roughly even split I expect, over the next four years or so, between the primary platforms from Apple, Google and Microsoft.