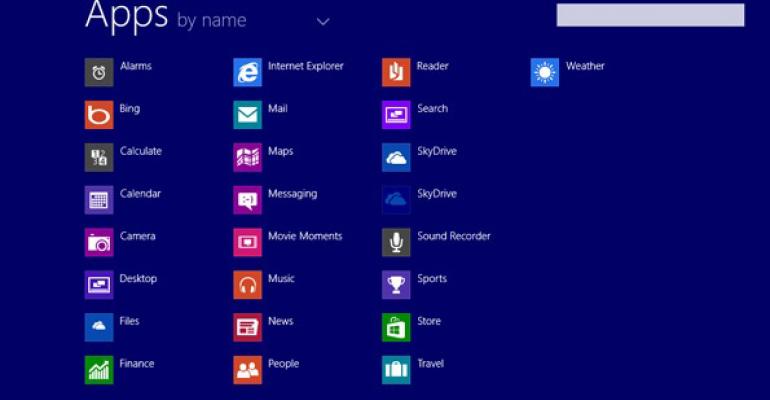 Coming in Blue: Boot to Desktop, Start Button, and More!

It's nice to see Microsoft listening to its customers again

Microsoft could announce as soon as this week how it will implement the two most important user experiences in Windows 8.1 “Blue”: Boot to desktop and the return of the Start button. But there’s no need to wait: Mary Jo Foley cites very reliable sources who explain exactly how it’s going to happen.

First, be sure to check out Mary Jo’s post, Here's how the new Windows Blue Start Button may work. She’s right to qualify it, as things change. But let’s be clear here. This is almost certainly happening exactly as described.

Best of all, there are additional details about the UX changes coming in Windows 8.1. Here’s the rundown.

In the so-called Milestone Preview (MP) version of Windows 8.1, which I know was issued internally at Microsoft about two weeks ago and could be released to the public as a “release preview,” Microsoft has added the option to boot directly to the Windows 8.x desktop. You may recall that this was one of my key concerns in the Fixing Windows 8 series of posts. (I’ve also explained how you can add this functionality to Windows 8 with third-party utilities.)

This one is interesting: According to Mary Jo’s source, the Start button will be enabled—on the desktop only—by default. It will look just like the Start charm in Windows 8, and be positioned in the same place as it was in Windows 7, but will of course trigger the new Start screen when clicked, and not the legacy Start menu. When you mouse into the lower left corner of the screen in any “Metro” experience, you’ll see the new Start button instead of the Windows 8 Start tip.

But here’s the trick: If you do click this button, it will remain displayed on the desktop going forward. If you don’t, and instead use a hardware Windows key, the Start button will disappear and things will work as they do in Windows 8. You can of course manually enable and disable this button as you prefer.

According to Mary Jo, users will also be able to replace the stock Start screen with the All Apps view, where you see tile-like icons for every installed application, but no live updating functionality. But there are changes: “Users will be able to arrange the icons by usage, allowing the most commonly used apps to be first,” she writes. “This view is the closest users will get to the Windows 7 Start Menu, even though it will be full-screen, instead of a list.”

Addressing another common complaint, Windows 8.1 will also apparently offer the ability to set the desktop wallpaper as the Start screen background too, making the transition between the two environments less jarring. This is an important change, I think, and I’m surprised it wasn’t part of the original release of Windows 8, where you can only change between a bizarre set of supplied background choices.