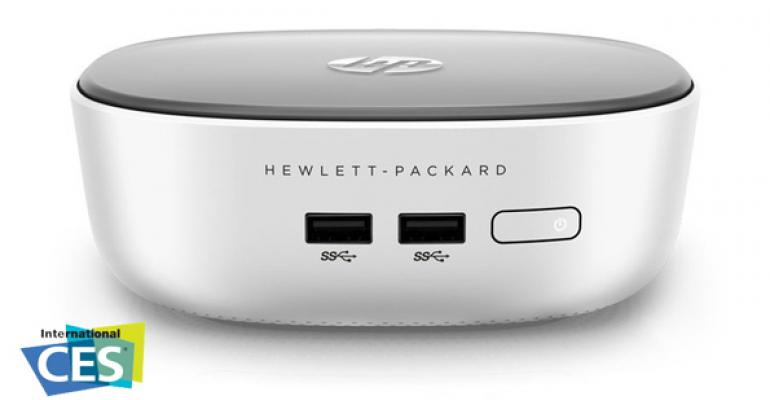 Another great idea from HP

Here's another announcement I've been sitting on: HP is expanding its popular Stream line of portable PCs and tablets to the desktop with the new HP Stream Mini Desktop. And if that mighty mite isn't powerful enough for you, it is offering an upsell in the form of the HP Pavilion Mini Desktop, which provides more powerful processors, and more RAM and storage.

I spoke with HP shortly before Christmas about this latest initiative, and I have to say I'm really impressed with where the firm is heading in the PC space. Stream has emerged as HP's value product line, whereas it will continue using the Pavilion brand for mainstream PCs and devices. And between the two you see a fairly logical step up from the low-cost/value part of the market, and, more important, something solid for any budget.

Both devices share the same cute form factor shown above. It's more Apple TV than Mac Mini from a looks perspective, but as is the case with the HP Stream 11 and 13, there's a lot more in there than meets the eye. Each sports four USB ports, an SD port, and efficient power usage with the Pavilion Mini drawing just 45 watts of power.

The HP Stream Mini Desktop features an Intel Celeron 2957U processor, 2GB of RAM (non-expandable), and 32 GB of eMMC storage, which should sound familiar: It's basically a desktop version of the HP Stream laptops. It starts at just $180, and though it doesn't come with a year of Office 365 Personal—HP told me these deals are negotiated on a device-by-device basis—you will get 200 GB of OneDrive storage for two years instead, plus a $25 Windows Store gift certificate.

The HP Pavilion Mini turns everything up a notch. It can be had with an Intel Pentium 3558U or Intel Core i3-4025U processor, 4 GB of RAM (user upgradeable to 8 GB), and 32 GB to 1 TB of internal storage (500 GB and 1 TB HDD options are available). It actually supports two monitors, too, thanks to its DisplayPort and HDMI ports. The Snow White unit depicted above is the HP Pavilion Mini.