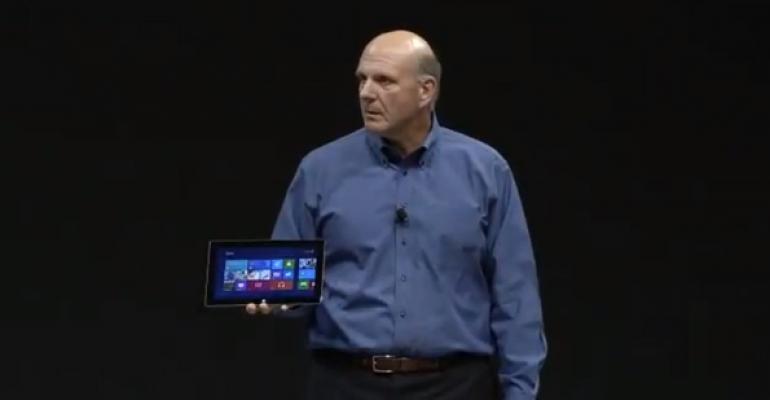 Can Surface be Saved?

Another Microsoft brand crashes and burns

Industry watchers and technology enthusiasts like myself will be debating Microsoft’s decision to enter the PC market for years to come, but in the wake of a disastrous Surface launch year a more pressing concern emerges: Can Surface be saved? Or is this brand already too tainted to survive, let alone ever be successful?

I assume you’re familiar with much of the short history of Surface already. And you may recall my early warning signs that something was wrong: I didn’t attend the Surface reveal event in Los Angeles in June 2012 because of the incredibly short notice, during which Microsoft refused to provide even a hint about the content or import of the event. Others who did attend then sought to justify the expense of that last minute travel by pretending to have had “hands-on” time with the devices, when in fact all they could do was very briefly touch non-working prototypes. Put simply, this one stunk right from the get-go.

But rewatching the Surface reveal event now—like everything else these days, it’s available for posterity on YouTube—I see what really set me off originally: Windows head honcho Steve Sinofsky trying to pull off what can only be described as the worst-ever Steve Jobs impersonation. Sinofsky is what I call “wicked smart,” and he certainly had an engineering mindset that I appreciate. But he’s not a vision guy, let alone a Jobs-style salesman. And his part of the Surface reveal event feels forced and stilted to me as a result.

(By comparison, Panos Panay is a vision guy. He’s got that thing that Jobs obviously had, and I’d have to go back to Hillel Cooperman from the Longhorn days to find a guy anything like that at Microsoft. The Surface reveal should have been all Panay.)

Anyway, the Surface got off to a bad start, at least for me. And this mirrored my earlier experience with Zune, which was also launched in a bizarre, hubris-heavy way that showed a distinct lack of humility for a firm that was then, as now, entering a market in which it was simply being dominated. The Zune crashed and burned in the face of the awesome iPod and iTunes. And so far at least, Surface—and, as alarming, the entire ecosystem of Windows 8/RT-based tablets, for that matter—has crashed and burned in the face of simpler and less expensive Android tablets and the iPad.

The parallels with Zune are interesting. In both cases, Microsoft established a new (well, recycled in the case of Surface) brand for a new family of hardware products. In both cases, Microsoft adopted a coopetition model in which it sought to have it both ways by both supporting partner devices and then competing with them head-on with their own. And in both cases—God help us, but it’s true—there were actually real innovations there, useful and distinctive features the competition lacked.

Of course, Surface is a bit more dramatic of a story. Surface runs Windows, and Surface competes with the firms that catapulted Windows to great successes over 20 years, turning this once-humble MS-DOS hosted GUI into Microsoft’s core product. The fear at the time of the reveal event was that Microsoft would alienate these partners by making its own hardware. Some complained, some voiced indifference, and some remained silent. But the events of the past year or so should be troubling to Microsoft. Because actions speak much louder than words.

First, of the few PC and hardware makers that voiced support for Windows RT last year and the subset of those that actually shipped devices, virtually all have completely and publicly backed away from the platform. Indeed, the most successful Windows RT device, by all measures, is Surface RT. And that device required a nearly $1 billion write-off because of poor sales.

Second, more and more PC makers are turning to free Google platforms. Not just Chrome OS, which is a super-cheap/low-risk bet, but also now Android. That latter OS is of course tailored for smart phones and tablets, but if a Windows 8 tablet can become a PC courtesy of a keyboard base, why can’t an Android tablet do the same? Turns out it can. And as that system matures, it will become a more formidable threat to Windows … in the PC market. This is a golden opportunity for PC makers to seek revenge on Microsoft.

What’s really messed up, however, is that Microsoft may actually harm Windows and itself more at this point if it did step away from the Surface brand and stop making its own PC hardware. They’ve already done the damage to their relationships with PC and hardware makers. Killing off Surface would just deprive customers of some of the only truly superior PC hardware out there.

And these devices really are superior. We can debate specifics around battery life, the keyboard choices, the number of ports, the non-adjustable kickstand, or whatever. But these are beautiful and well made products. I previously described them as what a “Pro” line of iPads might look like if Apple were to make such a thing. The industrial design and fit and finish are top notch.

Too, I still believe that this kind of hybrid device—one that combines work and play thematically and tablet and laptop physically—is the future of the PC. Not just the Ultrabook, but the PC. The ability to use and travel with just a single device that does it all is still a dream today. But we can see the future in the Surface and in other hybrid PCs of the past year. Surely, a new generation of Surface PCs (as well as other devices) will get us closer to realizing that promise.

It’s obvious, too, that the dysfunction of Surface mirrors the dysfunction of the Windows 8 and RT OSes which they run. In full-bore Monday Morning Quarterback mode, I think that Windows RT should be relegated to consumption-first devices that lack a desktop environment, and that the next Surface RT device should be the 8-inch Surface Mini we all know is coming. The desktop experience is lousy on these tiny devices. So just get rid of it already, and do so with the platform that makes the most sense.

Then, Microsoft could make two Surface models running Windows 8: A 10-inch model, simply called Surface and running Windows 8 Core, and a 13-inch Surface Pro model with a (detachable) hardware keyboard that would fulfill the need for a true touch-based Ultrabook. Each would be based on some form of Haswell processor, with perhaps an i5 on the mid-level machine and an i7 on the Pro.

The details don’t matter. Ultimately, Surface is a brand and a product line that’s worth saving. I hope that Microsoft gives Surface the time and effort it requires. Its spotty history in the past certainly has me worried that that won’t be the case.