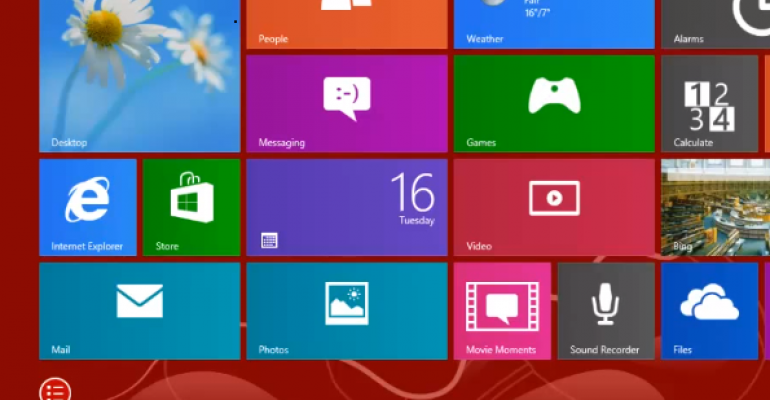 It’s been an exciting week for Windows fans: Two more builds of Windows 8.1 “Blue” have leaked, build 9369 earlier in the week and build 9374 today. Neither is particularly new—they both date from last month—but the latter build in particular offers a few interesting new features.

I wrote about the first leaked build, 9364, in Windows Blue Leaks! And (Virtual) Hands-On with Windows 8 “Blue” Build 9364. The more recent build, as you can see, are just 5 and 10 days newer, respectively, and as such you are correct to assume that nothing major has changed. That said, there are indeed some differences worth noting.

First, I should say up front that two of the rumored changes to Windows 8.1 “Blue”—the return of the Start button and the option to boot to the desktop—are not present in these builds. The former may not show up until after the public preview, I’m told. That is expected in late June. (Build 9374 actually uses the term Windows 8.1 Pro Preview to describe the OS, so we’re obviously heading in this direction.)

Here are few of the new features exposed in this build. Note that this list is preliminary and based on screenshots posted online. I’m traveling this week, so I won’t be able to dig deeper until I return.

Windows 8.1 “Blue” will apparently include a “kiosk mode” through PC settings that lets you “lock down” the PC to provide a “single immersive app experience.” (Note the word of the use “immersive” there: As I’ve said in the past, anyone who believes that Microsoft has settled on the term “modern” to replace “Metro” is incorrect; instead, the firm continues to use multiple terms.)

While Microsoft already provides a “file picker” interface to Metro-style apps that need to let the user traverse the PC/device’s file system, many users have complained that a true Metro-style File Explorer app is needed. Such an interface appears in newer Blue builds as an app called Files, which appears to be an update of the current SkyDrive app. And while one of my sources tells me this won’t actually be included in the final version of Blue, I can’t see why not: Windows 8.x needs a Metro-style File Explorer.

We saw earlier that Microsoft was implementing SkyDrive/Explorer integration through the Metro-based PC settings interface, meaning that it will be available to Windows RT users for the first time. (The current solution is an aftermarket desktop application that only works with Windows 8.) But apparently this SkyDrive integration will also include the ability to target SkyDrive as the default file save location too, something that’s currently available only to Office 2013 applications. SkyDrive also appears in File Explorer in the desktop automatically. (Again, this currently requires you to install the separate application.)

I noted previously that the All Apps app bar button, available from the Windows 8 Start screen, was being tinkered with in Blue and that in the previously leaked build, you could only find it with a touch-based system. In 9374, the button appears hovering over the lower left corner of the Start screen when you move the mouse around, giving you a visual indication that it exists and that you can use it to see more apps.

The All apps view in Windows 8 is a collection of grouped apps (and applications) arranged alphabetically. In 9374, you can sort this list in different ways, including by name (alphabetically), by date installed, or by most used. Additionally, there’s a search box in this view so you can search for apps: No need to know about the Charms-based search functionality.

In keeping with previous Blue builds, which continue the move away from the desktop, there have been changes again in PC Settings. This will continue, no doubt.

The newer builds provide more settings that can be synced between PCs/devices using your Microsoft account. I expect this list to keep growing and am hoping to come up with a useful delta guide explaining what’s changed.