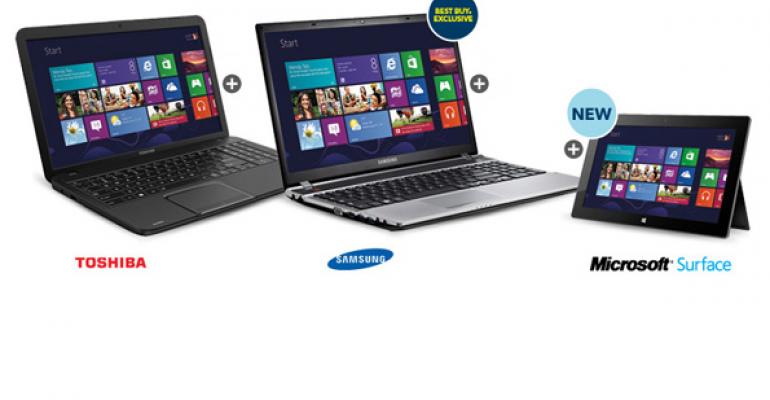 This Best Buy Circular Says It All

Yesterday, I wrote about how the netbook and its low-ball pricing model have essentially destroyed the PC market and caused consumer to demand unreasonably low prices. Today’s Best Buy circular pretty much makes the same argument, albeit it visually.

Read more in about this topic Explaining Windows 8 PC Sales Over the Holidays.

Here’s the front page of the circular.

Consumers interested in that low-ball pricing only need to turn the circular page to see the PCs that Best Buy, Microsoft, and the PC industry want you to buy: A selection of 9 more expensive ($599 to $949) notebook computers, some with multi-touch capabilities, which map nicely to NPD’s goal for the industry to “establish a value proposition for PCs in the $500+ price segment.” “[PC makers] need to think [dollars] and not units in 2013,” the firm concluded.

But no worries, cheapskates: There’s a Dell notebook PC running Windows 8 in this circular that just costs $299. (And this PC was actually available in a bundle before Christmas that included some accessories for the same amazingly low price.)

For comparison’s sake, there are also different desktop PCs for $449 to $999. And though there are only a few full-sized (~10-inch) tablets, and oddly no Apple iPads at all, they are amazingly low-priced (aside from the Surface): Just $229 for an Acer Iconia Tab A200 and $299 for an ASUS Transformer TF300, both running Android. Yikes.