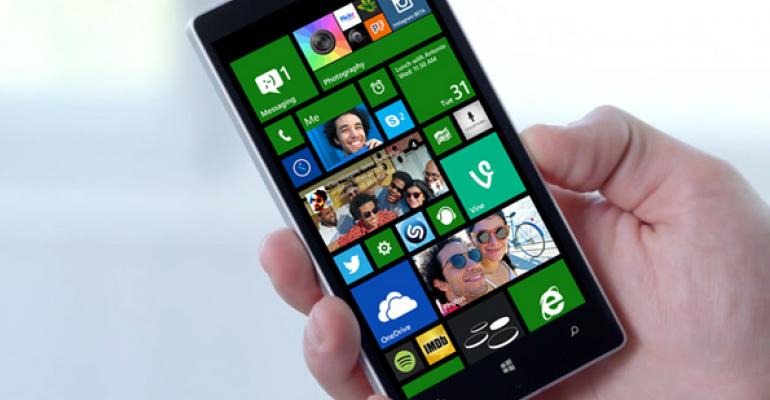 Don't worry, it's the first of many

Well, now it's official: Microsoft has confirmed that it will soon rollout the first major update to Windows Phone 8.1, which is amazing given that that version of the OS is just now making its way to users' handsets around the world. As it does with the first update to Windows 8.1, Microsoft is referring to this thing as Windows Phone 8.1 Update (no "1"), but I'll continue to refer to it by its real name: Update 1.

Microsoft's Joe Belfiore announced Update 1 in China, and for good reason: This first update brings the Cortana digital personal assistant to the world's biggest smart phone market. Cortana is also coming to the UK with Update 1, and to Canada, India, and Australia in "alpha" form. (You know, because those countries only kind of speak English. But I kid.)

Of course, as a tech enthusiast what you're really wondering is: When can I get this update for myself? And here, I've got good news. Very soon—early August, most likely—via the free and familiar Developer Preview program I've written about in the past. (Update: Microsoft now says it will be available next week. --Paul)

And now you're wondering what's new. I just wrote about Update 1 in Microsoft Leaks Windows Phone 8.1 Update 1 Details, but here's what I've heard on the record from Microsoft since posting that. There's a bunch of stuff happening in this update.

Cortana in China. Getting Cortana to China is a big deal: It's the biggest smart phone market on earth, and it comes with very specific cultural requirements. For example, in China, Cortana is being modified to support an optional new UI in which the user can see a pair of expressive eyes—which react visually to queries—because eye contact and emotions expressed via the eyes are important to Chinese users. She supports Chinese (Mandarin) in voice, text, and speech, and provides specialized Chinese suggestions for things such as air quality information, driving restrictions, local TV show and celebrity news.

Cortana in UK. In the UK, Cortana has been customized to support UK spelling and pronunciation differences and uses a UK voice, accent and even personality. You can get Bing-powered local sports data, information from the London Stock Exchange, commuter conditions, and more locally-relevant information. Aluminium!

Cortana improvements for the US. Cortana of course debuted in the United States with Windows Phone 8.1, so it's most mature there. With Update 1, Cortana improves in the US with a number of new features: New natural language scenarios, snooze times for reminders, and even personality additions (Microsoft recommends asking her to "do an impersonation," for example) Cortana can be used hands-free in the car for phones that can connect via Bluetooth and integrate with the car-based contacts list.

Cortana "alpha" in Canada, India, and Australia. This is described as an early adopter program and will be opt-in. Those that do in these countries can access the US or UK version of Cortana using the English language.

Smart Cover support. Because its hardware partners wish to build experiences beyond the screen, Windows Phone 8.1 with Update 1 will support so-called "smart covers," similar to what we see on certain Android devices.

Live Folders. As previously reported, Update 1 will include support for Live Folders on the Start screen and this feature will work exactly as expected, and just as folders do on other platforms. Well, there is one difference: They're live folders, so you'll still get app updates from the contained apps.

Xbox Music that doesn't suck. Here's some seriously good news for those users who have suffered through the crappy Windows Phone 8.1 version of Xbox Music: Microsoft hears the complaints, they agree the app is broken, and they're fixing it. In Update 1, you will see a major update to Xbox Music that fixes problems and adds new features like Now Playing on the live tile. And going forward, Xbox Music will continue to be updated with additional new features. Hang tight, folks. They get it.

SMS improvements. In Update 1, you can now select multiple SMS messages and then delete or forward them all in one action. (Indeed, multi-select, which is currently sporadically available in the built-in Windows Phone apps, will be available in more and more places, including the Phone app's call log, starting with Update 1.)

Apps Corner. This interesting new feature has two main uses: Businesses can utilize it to restrict which apps the user can install and run (like App Locker in Windows, I guess) without needing a full Mobile Device Management (MDM) solution. Or it can be used to make Windows Phone operate in a sort of kiosk mode where it boots directly into an app and the user can't switch out of it. This is good for retail situations, where an employee is using the phone to make sales or interact with customers. It can also be used for in-store demos.

Consumer VPN. This one is very interesting as well: Any Windows Phone user will be able to turn on a so-called "consumer VPN" that can protect your phone and your data on public Wi-Fi networks. (And if you're on your home network, this VPN can ensure that your phone is unreachable from other PCs and devices connected to the network too.) It's basically a way to do VPN tunneling without MDM or any IT infrastructure.

CDMA + GSM dual-SIM support. Windows Phone 8.1 natively supports dual SIMs, of course, but in the current implementation, both SIMs must be on the network type (where both are GSM-type SIMs, for example). With Update 1, Windows Phone will support "C+G" dual-SIMs, meaning a phone with one CDMA SIM and one GSM SIM. This is ideal for—wait for it—China, where China Mobile supports both network types.

Bluetooth accessory notifications. This will allow wearable devices--smart glasses, fitness trackers, and so on—push notifications to a Windows Phone handset. This is not currently possible.

Use SD card during update. Today, the Windows Phone update process can't utilize free space on an SD card, and users are seeing "out of space" errors on devices in which the internal storage is mostly utilized. With Update 1, the update process will actually utilize storage space on the SD card.

Windows Phone Store live tile improvements. Not a huge deal, but when displayed in the medium size, the Store tile will now be "live" and will show new apps, the app of the day, recommendations, and the like.

What's in a name? Microsoft told me that this update was still called GDR1 internally but that the "real name" was Update 1. It's calling it Update to keep in sync with the Windows 8.1 Update, but the firm confirmed that there would be future updates, like Update 2. Let's just all agree that this naming convention is stupid and continue ignoring it. The good news? Update 1 looks great. The better news? More is coming.