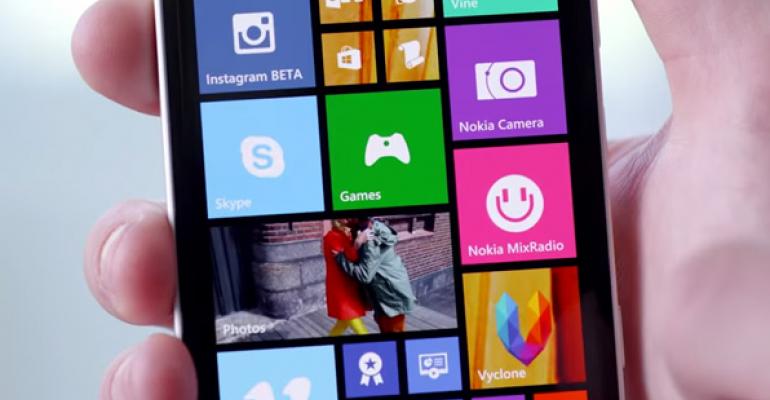 Folks, this is huge

About a week and a half ago—and just days before the official announcement—some information about Windows Phone 8.1 Update 1 leaked, including support for some new screen resolutions and sizes. When Microsoft did officially announce this update, they only partially explained the system's new hardware support. But now we have a much clearer idea about the new types of Windows Phone devices we'll soon be seeing. And some of the new functionality may surprise you.

You can find this information in the newly released partner documentation for Windows Phone 8.1 Update 1 (which still refers to this update by its other real name, GDR1). There is a lot there, but I'll provide a simpler breakdown of what I think is most important here.

As many had hoped for, and as that recent leak sort of suggested, device makers are now able to make Windows Phone devices that are not phones. That is, these devices no longer need to support cellular connectivity. To create such a device, the hardware maker needs to install something called the Wi-Fi Feature Pack, which "removes all cellular-related functionality from the operating system and is intended only for devices that will not be connected to a cellular network." Bingo! And when you combine with support for 7-inch devices—see the next section—you arrive at a wonderful place: Device makers can now make Windows Phone-based mini-tablets.

Not convinced? According to the documentation, the Wi-Fi Feature Pack removes all cellular related tiles, icons, and settings from the user interface. Including this feature reduces memory usage and "improves the user experience by not displaying nonfunctional cellular settings and icons."

With Windows Phone 8.1 Update 1, Microsoft's mobile platform now supports more screen resolutions than before, but nothing higher than the 1080p (1080 x 1920) support that first appeared in Windows Phone 8. But it also supports bigger physical screens than ever before: Now the biggest devices you'll see running Windows Phone will have 7-inch screens, up from 6-inches (like the Nokia Lumia 1520) in Windows Phone 8.

So device makers can now make Windows Phone-based devices with screens that are 6.01- to 7-inches in size, vertically, but only at 768 x 1280. This means that 1080p screens can only be had at 6-inches or smaller. It's unclear why, but I suspect the firm is worried about undercutting Windows 8.1-based mini-tablets too much.

There's more, not quite as interesting.

Additionally, Windows Phone now supports something called qHD, which stands for "quarter HD," and is typically 540 x 960 pixels. As with 800 x 1280, qHD is only supported on 6-inch screens and smaller.

And while device makers could make low-end Windows Phone 8.1 handsets that utilize a 480 x 854 native resolution in which 480 x 800 is used for the actual display and the remainder is used for an on-screen, software-based navigation bar with Back, Start and Search buttons, they can do more with Update 1. Now, they're able to utilize both WXGA (480 x 800) and qHD (540 x 960) with the software-rendered navigation bar as well. And on these devices, the navigation bar can be hidden, which we haven't seen yet.

Windows Phone handsets (including existing models) with an MSM8974Pro or MSM8926 applications processor can take advantage of High Voltage Dedicated Charging Port (HVDCP) charging, which charges the handset much more quickly than is the case normally. This technology is marketed under the name Qualcomm Quick Charge 2.0. And according to that firm, a device that requires 270 minutes to fully charge normally will do so in just 96 minutes using Qualcomm Quick Charge 2.0.

Windows Phone 8.1 supports dual SIMs, which is an important feature in emerging markets like China, Africa and the Middle East where customers are not locked into lengthy contracts and can switch carriers on the fly. With Windows Phone 8.1 Update 1, devices can now support dual SIM for W+G (WCDMA + GSM) or C+G (CDMA + GSM), instead of both SIMs both being GSM (or CDMA, though I'm not sure such a device was ever made). The Lumia 630 is a dual SIM device, but both SIMs are GSM. Dual SIM for W+G is particularly important in China, because that nation's biggest carrier, China Mobile, has both CDMA and GSM networks.

Files app is now an optional part of the OS

Hardware makers can now opt to preload the Microsoft Files app with their devices. Microsoft describes this app as "an app for managing files on Windows Phones." You can read more about it in my article Files App for Windows Phone 8.1.