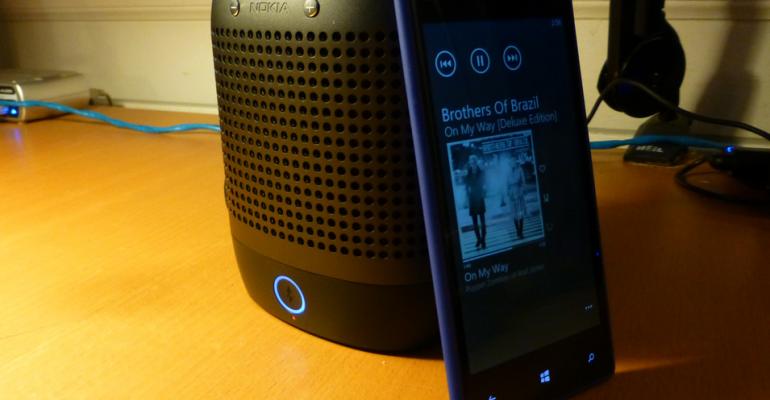 While Windows Phone 8’s support for Near Field Communications (NFC) is largely futuristic since it requires NFC-based payment systems or other users with NFC-compatible mobile devices, I’ve found one interesting use for this technology that works now: You can use it to more easily pair with Bluetooth speakers that are also NFC-enabled.

If you’ve ever connected to a Bluetooth device with a PC or phone, you know that it’s a multi-step process that usually requires you to type a code in order to configure the pairing. But if you have an NFC-capable speaker, like the Nokia Play 360 Bluetooth Speaker I’m using, you can pair an NFC-capable Windows Phone 8 handset (like the HTC Windows Phone 8X I’m using) much more easily.

Note: For its new generation of Windows Phone 8 handsets, Nokia has released a new speaker, the JBL PlayUp Wireless Speaker for Nokia. This unit also offers both NFC and Bluetooth capabilities and should work in exactly the same way.

On the phone, you’ll see a toast notification asking you if you’d like to pair the devices and, if required, turn on Bluetooth.

And that’s it: The phone will quickly issue a happy connection made sound and you can start playing music: The sound will come from the Bluetooth speaker.

If you’re curious about the mechanics of this connection, I suppose it’s fair to say that NFC is used here to orchestrate the connection, or pairing, while Bluetooth is still used, as before, for the actual connection. So you use NFC once, to pair via Bluetooth. But once that pairing is enabled, the connection works, as it would had you gone through the Bluetooth settings on the phone, over Bluetooth.

And in case it’s not obvious, this type of NFC-based pairing orchestration requires that both devices—the phone and the speaker in this case—have both NFC and Bluetooth capabilities. If one of them only has Bluetooth, you can simply continue using the Bluetooth settings on the phone to pair the devices.

Naturally, there’s much more you can do with NFC. I’ll be writing a separate tip about sharing via NFC in the near future, for example.