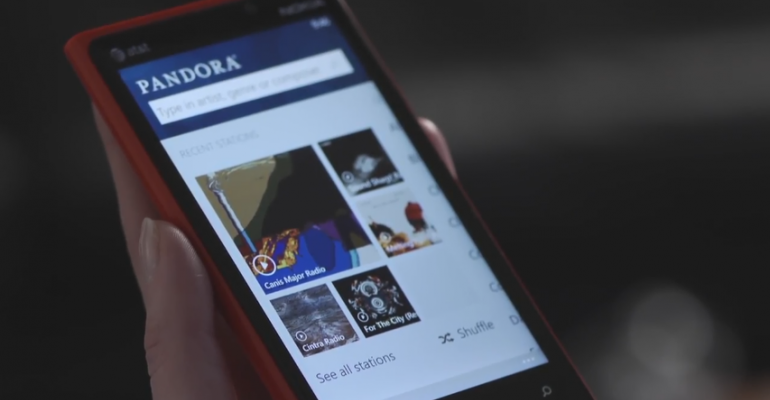 Windows Phone 8 finally gets Pandora, plus some exclusive features not available on iPhone or Android!

Unless you simply don’t care about music or have been living under the proverbial rock, you’ve heard about Pandora, the hugely popular Internet radio service that lets you create streaming playlists of songs, or stations, based on music you like. But if you’re using Windows Phone, you also know that there’s been no official Pandora app for the platform, though some decent third-party solutions stepped in to close the gap.

At the Windows Phone 8 launch in October 2012, Microsoft promised that Windows Phone 8 users would be treated to a Pandora app for that platform, one that would be advertising-free through the end of 2013. The firm further promised to deliver that app in the first quarter of 2013, setting the clock ticking as increasingly frustrated Windows Phone users counted down the days to April 1, positive that Microsoft would once again let them down.

Folks, for once, the Windows Phone team actually delivered as promised. With today’s release of the Pandora app for Windows Phone 8, we have not only received a long-overdue, gotta-have-it app that’s been available on iPhone and Android for years, we’ve a version of that app that is superior to what’s available anywhere else. For once, being late to the party has paid off.

Ad-free. Unlike on other platforms, you don’t have to pay extra for Pandora One to get an advertising-free experience on Windows Phone 8. Microsoft is subsidizing the cost of the $36 annual subscription for all users (at least on Windows Phone 8), and Pandora will be free throughout all of 2013. Starting on January 1, 2014, however, you’ll need to pony up the reasonable annual fee to continue with an ad-free experience.

Pin stations to the Start screen as tiles. You can pin your favorite Pandora stations to the Windows Phone 8 Start screen as unique tiles so you can get to the music you want as quickly as possible. No more wading through text lists in the app, like you have to do on Android and iPhone. And those tiles are of course “live,” showing information about what’s currently playing. Try that on an iPhone. (Spoiler alert: You can’t.)

Kid’s Corner integration. If you allow your children to use Pandora through the unique Kid’s Corner feature in Windows Phone 8, Pandora will automatically filter out any explicit content and deliver only kid-friendly music.

I should mention, too, that the unique Windows Phone UI used by the Pandora app on your favorite platform is also an advantage: This is simply the best-looking Pandora app on any platform.